How to use an audio compressor?

But do you really know what audio compression is for? Do you know how to adjust the attack, release, threshold, or ratio parameters on your plugins?

Maybe not, and that’s normal: it’s a fairly complex subject.

The problem is, if you don’t know exactly what effect each of these dynamic compression settings has on your music, you risk deteriorating your mixes rather than improving them.

I, therefore, advise you rather take a few minutes to follow this tutorial on the different settings of your compressors so that you can adjust them yourself.

Whether you use a compressor for mastering or an analog audio compressor, whether you’re working on Cubase, Ableton, or Reaper — the settings are basically always the same!

What does an audio compressor do?

Above all, an audio compressor is an effect in the same way as equalizers, reverbs, distortions, etc. It can take the form of a plugin or an external / hardware effect module.

In general, and although there are many possible ways to use an audio compressor, it can reduce the dynamic range of a recording or an entire mix. That is, to reduce the gap between the loudest sounds and the weakest sounds of the track.

Hence the name, by the way: a compressor compresses the sound.

For example, if we have a voice track with a significant variation in level between the words, we will be able to level the sound by attenuating the loudest parts.

Here is an example in pictures: 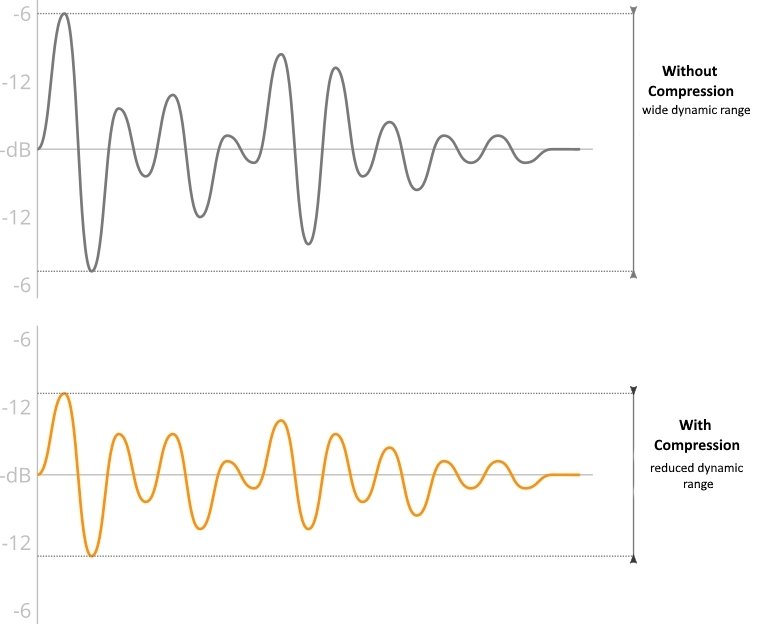 On the top image, there is no audio compression: the signal (the singer’s voice, for example) alternates between strong peaks and less loud elements.

On the bottom image, we used compression to attenuate these peaks. Indeed, these are now at a level closer to the rest of the recording. Therefore, the dynamic range has been reduced, and the sound is perceived more homogeneously.

This is why we talk about compressor and dynamic compression.

How does an audio compressor work?

You’re going to say to me: okay, but how does an audio compressor work? Why do we need it in a mix?

So I’ll give you a theoretical example…

If you mix the vocals so that the quieter parts are heard above the instrumental track, then the louder parts will just be way too loud. They will exceed the level and will overload your speakers.

Read Also: What Is DAC and Why Do You Need It?

Conversely, if you optimize your mix so that these are at the correct volume, then the words spoken in a low voice will be almost inaudible among the denser sound of the instrumental track.

What to do then?

This is precisely where the audio compressor will help us since it will control the peaks and reduce the differences in the level of the vocal track. It will then be possible to mix the two instruments in a much more pleasant way.

Let’s take an audio example (with the very kind agreement of James May, the composer of this piece entitled “All Souls Moon“).

In the uncompressed version, these syllables stand out too strongly, they interfere with listening.

On the other hand, when compression is applied to the vocals, the sound level of the vocal track seems much smoother and homogeneous and blends better with the rest of the instruments.

Of course, to control this type of effect, you have to know how to correctly adjust your audio compressor settings (and place it correctly in relation to the EQ ).

This involves adjusting a number of settings: the threshold, the ratio, the knee, the attack, the release, and the output gain.

Yes, that’s a lot of things! But we will see all this in detail right away…

The Threshold parameter is particularly important for successful compression.

This is simply the level in decibels (dBFS) at which the dynamic compressor begins to work – in other words, to attenuate the signal.

In the image, it will perhaps be a little clearer:

How do you choose at what level to set this threshold?

It just depends on what you want to do with your compressor.

If you only want to attenuate the peaks, then you’ll set it quite high. Kind of like the picture above, actually, although the numbers will be completely different.

If, on the other hand, you want to reduce the dynamic range of your recording more broadly (to level out a vocal track, for example), then it will be worth trying a lower threshold so that the compressor affects more of the signal.

Note: the threshold level you are going to set necessarily depends on the sound level of your raw track. Consequence: it is impossible to give theoretical values ​​that could correspond to such and such an application.

The Ratio is simply the parameter that controls the amount of audio compression applied to the signal that exceeds the threshold.

To illustrate what the ratio corresponds to in more detail, I suggest you stick with me for a few more lines. ?

Let’s take the example of a 4:1 ratio (this is how ratios are written). 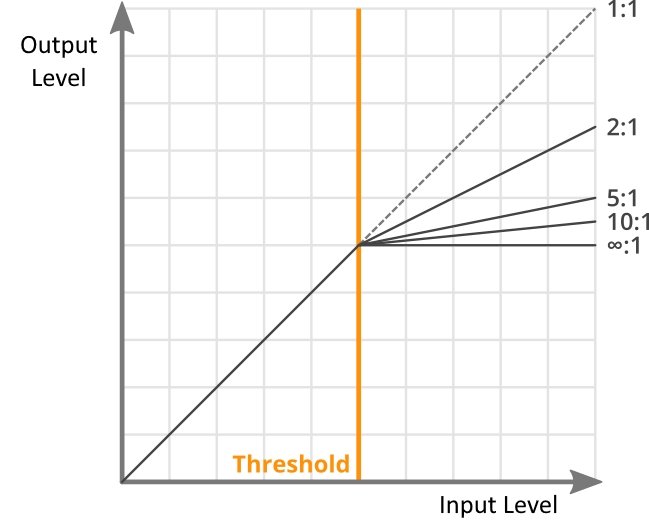 If the ratio is 8:1, then the level of any signal exceeding the threshold will be divided by eight. And so on.

So, if you see a 1:1 ratio, it means that there is no compression applied: when 1 dB enters the compressor, 1 dB comes out. This is called a unit ratio.

Similarly, an infinite ∞:1 ratio will indicate limiter-type operation: the entire output signal will be below the threshold no matter what.

But then, how to choose the compression ratio to apply during the mix?

Objectively, it really depends on the base record: there is no simple method to apply. I advise you to adjust your ratio until it sounds good.

However, to guide you a little, here are some indications:

The knee is also an important parameter of audio compression, but which is sometimes a little forgotten, a little put aside, when it really impacts the attitude of the compressors.

The knee, quite simply, is an adjustment allowing to control the transition zone around the threshold (threshold) of compression.

Difficult to make clearer than a diagram to explain the concept: 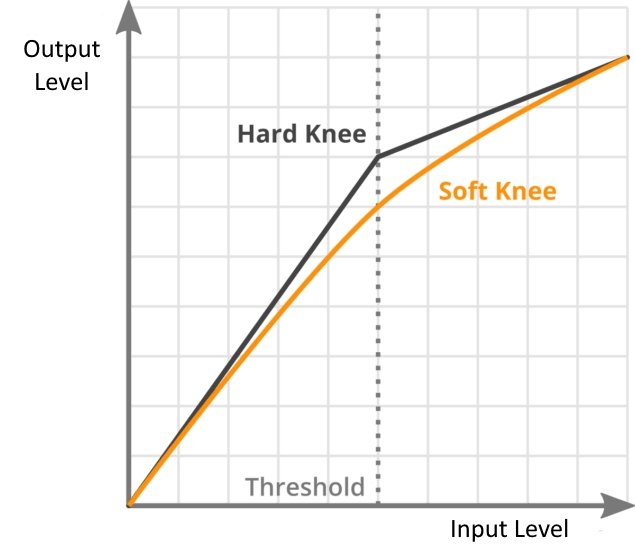 But then what is the impact on the sound?

The fourth parameter you absolutely need to know is the Attack. This is basically the responsiveness time of the dynamic compressor.

And to be a bit more specific: it’s the time taken by the compressor to compress the signal to the level determined by the ratio.

For example, suppose you have a ratio of 2:1 and an attack set to 10 milliseconds (ms). In that case, this means that the compressor, when it detects a signal exceeding the threshold, will take 10 ms before fully applying the ratio 2 :1 (division by 2 of the signal above the threshold). 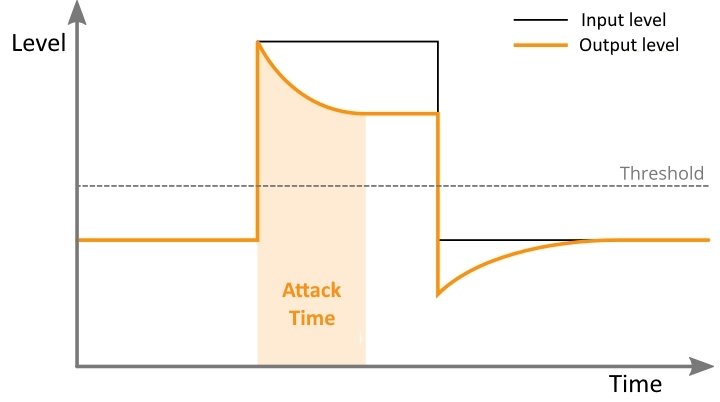 Of course, this crucial setting will mostly depend on what you want to do with your audio compressor. If you want to compress the peaks of a signal, then a fast attack will be in order. If, on the contrary, you want to highlight these peaks by attenuating the signal once the peaks have passed, then a slow attack will be advised.

Here are some examples of durations:

Now remains the setting of the Release.

Like attack, this is measured in seconds/milliseconds. This is the time taken by the compressor to stop working when the signal has fallen below the threshold. In other words, to return to the unit ratio 1:1.

You will have understood that if the release is not instantaneous, this means that your dynamic compressor can continue to compress the input signal even if it is below the threshold. 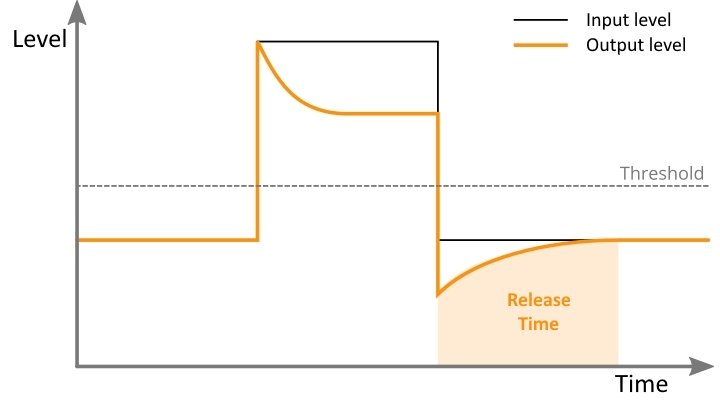 Consequently, it is, of course, important to set the release correctly. If it is too fast, you will generate a  pumping effect; in other words, you will hear the compressor ramping up the sound level after reducing it for peaks.

If it’s too slow, the compressor won’t have time to return to zero before the next peak, and your track will lose momentum noticeably.

The notions of “fast” and “slow” can be a bit abstract because they depend in part on the tempo of the music. That said, to give you an order of magnitude:

When you compress a sound, as we have seen, you attenuate part of the signal. This means that whatever happens, the output signal is weaker than the input signal.

The Make-Up Gain will solve this problem since it will allow you to control the level of the output signal.

How to fix it?

However, a good practice is to adjust it so that the average sound level is the same with and without effect. In other words, if you turn off the compressor, you shouldn’t hear any change in volume. The objective is to facilitate the comparison before/after compression.

And finally, let’s look at the sidechain setting.

Sidechaining is primarily an audio compression technique, but it’s also the name of a setting commonly found on dynamic compressors.

When you place a dynamic compressor on a track, it will compress the track’s signal.

But with the sidechain option, you will be able to trigger the compressor based on another signal, which can typically be:

A common use of this option is to trigger the audio compression of a track (bass, for example) each time the kick is triggered, which makes it easier to make it stand out.

How much should you use an audio compressor?

It’s a big debate, and it would be inappropriate to give an absolute rule.

However, once again, it is important to have an idea.

Most compressors, whether plugins or external effects have gain reduction ( GR) indicators. It is this measurement that will tell you the degree of compression you have applied.

In general, try to stay below 6 or 8 dB of gain reduction. If you exceed this number, your settings may be too extreme.

Moreover, for mastering, many sound engineers tend to say that you should barely see the needles move. The associated gain reduction is then minimal but effective enough to add sonic “glue.”

On the other hand, some compression techniques such as parallel compression completely crush the signal — a whole different story!

In any case, I can only advise you to experiment as much as possible.

Take a simple drum track, add a compressor plugin and vary the settings one by one. Take the time to identify the differences, the variations based on the elements that I summarized a little above.

Gradually, you will see, it will seem more and more simple!

There you go, you now have all the information you need to start using your audio compressors on your mixes, knowing what the different settings are for! 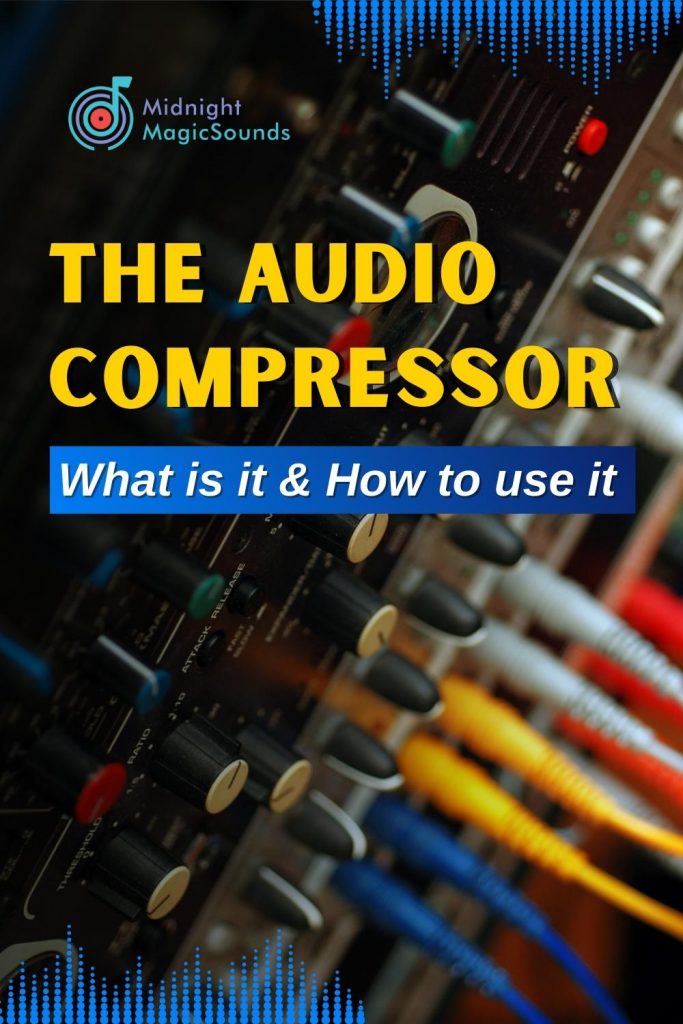