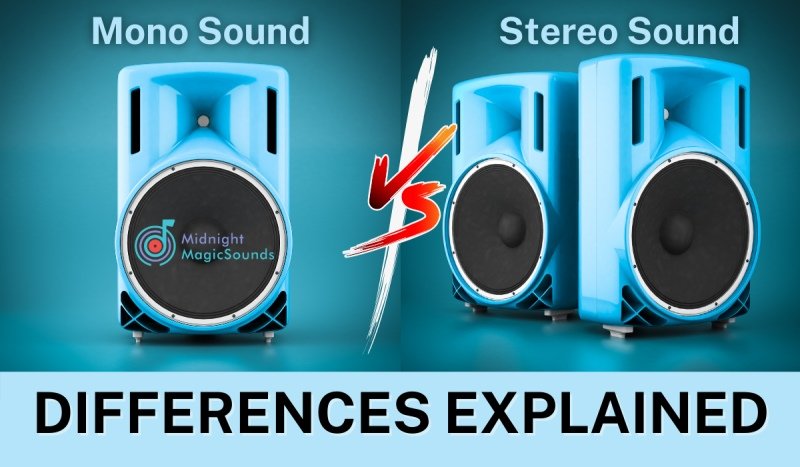 With great sound comes great responsibility. Perhaps you’re a mix engineer or a music lover wanting to learn more about mono vs. stereo sound differences. Don’t worry; we got you covered.

In this guide, we’ll go in-depth about both sound options and how you can benefit from them. By the end, you’ll have a clear understanding of how they work and how you can use them for your next audio project.

What is a Mono Speaker?

Mono speakers use one channel to emit sound throughout the room. Even if multiple speakers are present, the signal will go to both speakers. This creates the effect that even if the sounds come from numerous speakers, the sound still comes from a single source.

One example of a mono speaker is using a microphone to record a microphone. It doesn’t matter how many instruments or sounds are played during the recording. If it comes from one channel, it’s a mono speaker! That is because you are using one channel to capture the guitar’s sound.

Why Should I Use Mono Signals?

Here are some benefits of using mono sound for your setup.

One advantage of mono is that there’s one signal, and in good systems, listeners can hear the system at the same sound level. This makes mono systems suitable for speech reinforcement and can provide great speech intelligibility.

For solo recording, mono sound is the way to go. It allows you to focus on their vocals without focusing on the external instruments. When using mono sound, the artist will have a fuller, powerful, and more direct sound.

80s rock band? Then opt for a mono sound! The Beatles and other bands would use mono in their recordings, as stereo technology was not invented yet. A stereo was seen as a new system and was generally ignored by rock musicians.

Since performers wanted their music to be recorded in mono, earlier recordings sound more dynamic and powerful in audio. Also, mono sound is great for public speeches, where the clarity of the speaker’s voice is the primary focus of the audio mix.

Most smartphones have only one speaker. That’s because the phones are too small to have multiple speakers. If you’re going to create music for mobile phones, chances are you’ll want to stick with a mono sound.

However, some minor issues are present with the mono sound. Here are some of them:

Mono speakers can only come from one location. While this can be good for room listening, mono speakers don’t work well with larger areas. That’s when stereo sound is more beneficial, as it has a fuller and broader sound range.

Stereo (Stereophonic) sounds are used to create the illusion of sound coming from multiple directions. This creates an effect that’s similar to natural hearing. As a result, stereo sounds create a more enjoyable and immersive audio experience.

Stereo headphones or speakers work by reproducing sound from the right and left sides. This is a stark contrast from mono (monophonic sound), where audio is played from the speakers in one direction.

Although stereo speakers have a more realistic experience than mono systems, it’s important to know the difference between surround sound and stereo. Surround sound requires at least five strategically placed speakers in a way that “surrounds” the listener.

What’s the Difference Between Mono and Stereo Sound? 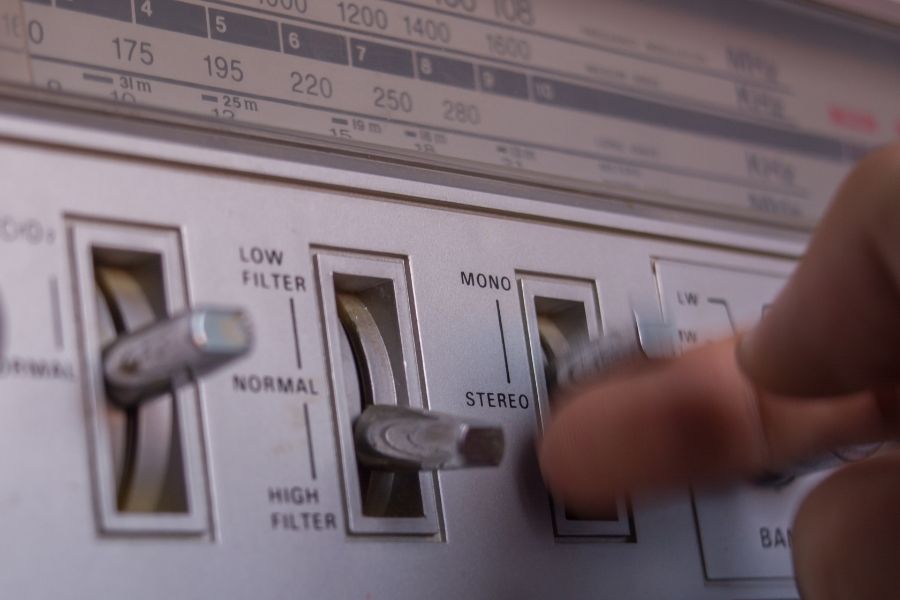 Casual listeners can tell the output difference between stereo and mono records. With mono audio, it has a “centered” effect. To visualize this, image a sound setup with two speakers (one to the right and one to the left). Mono tracks will use both speakers as an audio output.

On the other hand, stereo sound is used to pan the sound. A sound engineer can make an atmospheric sound by mixing the audio that comes from the microphones. This will drive a different signal between the right and left speakers.

This technique can explain how listeners hear live music. One way to picture this is to picture an orchestra recording with different stereo mics placed in different hall areas.

Mono vs. Stereo: Which one is Better?

There’s no clear winner as stereo isn’t better than mono speakers. Stereo sounds are more realistic, wider, and more detailed. However, depending on where the sound is played, stereo sound can create phase cancellation issues. This results in a weird, empty, and hollow sound. It would help if you used stereo when you’re in a normal listening environment.

Whether mono or stereo is better depends on your perspective and situation. For the average listener, stereo is better because it sounds better overall and creates width. As a mixing/producing engineer, you’ll want to create stereo tracks as they have more sound range.

But what if you want to dive in deeper and treat each instrument differently? That’s when you’ll want to use a mono system. Since each device has a different job in the mixing process, some of the instruments should be mono, and some should be stereo.

What is a Stereo Field?

Have you listened to the chorus of a song? Notice how everything has a wide sound but still remains powerful and incredibly focused? If so, that means the mixing engineer correctly used the stereo field.

Before we dive deeper, we need to understand its basic definition. A stereo field is a range between the right and left sides of a song. It has both right, mono, and left elements. It is used to make space for the elements in the mix and make them sound prominent.

Each song has stereo elements, left/right elements, and mono elements. So knowing about the stereo field helps determine which direction sound comes from.

How is the Stereo Field Useful?

The stereo field makes space for all the elements in a mix and makes them sound prominent and wide. The best method to take advantage of stereo sound is through LCR and 50/50 Panning.

LCR and 50/50 Panning means every element (except for vocals, bass, and kick) should be panned fully or 50% to the right or left. That way, you’ll have space for the vocals and other elements to shine and increase the mix’s width, which will result in a full mix.

Usually, you’ll want the bass, kick, snare, and vocals to stay centered. For the mono sounds and everything else, they should be placed on the sides.

Should I Record my Vocals With Stereo or Mono?

Use mono if you’re recording a single vocalist. But if there are multiple artists, or if there are unique acoustics, record the vocals via stereo.

Also, recording vocals in mono creates a clear, upfront, and powerful sound. Stereo vocals sound soft, wide, and large. You can record one singer in mono because the recording won’t affect the right and left channels.

Nevertheless, there are some scenarios where using stereo can be interesting. For instance, if you’re in a large room with acoustics, you should record the lead singer via stereo. However, this might complicate the mixing process, so be careful!

Since stereo has a more diverse range of options, there are multiple ways to record. Here are some of the techniques that are commonly used.

Tip: Avoid having the microphones touching each other as it can result in mechanical noise.

Be warned; directional microphones show a low-frequency loss at larger distances. This results in a reduction in sound color, richness, and energy. Unlike A/B setups, the XY setup doesn’t have comb filtering effects from stereo to mono.

The AB stereo recording uses omnidirectional microphones spaced apart from each other. This technique uses the microphone’s low-frequency response. However, the directional information is less disruptive than other setups.

AB is not suited for mono recording because the summed sound signal might suffer through comb filtering. Use one of the channels if you’re planning on using a mono recording.

The interaural time difference is powerful. If a sound is equal in both ears and is heard from the left ear, the sound will appear as if it has come from the left side. This is the Haas effect, and it is a mixing technique used to enhance the sound quality.

To do this technique, start by sending the signal to both speakers. Next, add a delay in the right channel. Watch as the signal on the left speaker reaches your ear before the right speaker. This causes you to think that the sound came from the left side – even though the loudness is equal in both speakers.

The MS Technique gives you more control over results, making it the most precise technique. You will need a bi-directional and cardioid microphone to achieve this result.

The cardioid microphone (side) is the primary sound source. Meanwhile, the bidirectional (mid) microphone picks up the left/right sound.

By adjusting the side and mid-channel, you can alter the stereo image to produce different results. Experiment with this technique to find a result that’s best for you.

Here are some reasons why you should consider using stereo audio.

Stereo sound gives you the chance to affect the listener’s left and right ear. This means that you can use 50/50 panning and other techniques to create a natural sound.

Stereo sound can be used to reduce phase interference between 2 or more speakers. When the sound originates in multiple locations, both sound waves will mix. For instance, a mono signal played through a stereo system would be open to this because similar signals are present.

With stereo mixing, you can pan all of the instruments so they can come from one speaker. The right and left signals would have less interference. Additionally, the issues made by phase interference will be significantly reduced.

Mono speakers are limited because only one microphone can be used. With stereo sound, there are multiple techniques that you can use to get the clearest sound possible. You can use XY, AB, MS, and other methods to enhance your sound. Thus, stereo sound has more versatility with its microphone usage.

While stereo provides a fuller sound experience, there are some drawbacks:

One main issue with stereo speakers is their mono compatibility. While the speaker audio prevents phase interference, it still causes phase issues in different ways.

To conclude, we believe that mono and stereo are useful in creating the best sound possible. For solo artists who want a rich sound, mono is the way to go.

But if you are recording for a live performance, then stereo will help you get that “wide” sound you’re looking for. But if you’re recording multiple elements, you should record in stereo to get the volume differences in the elements.

Regardless of their differences, a clear understanding of both will help you maximize your sound opportunities. 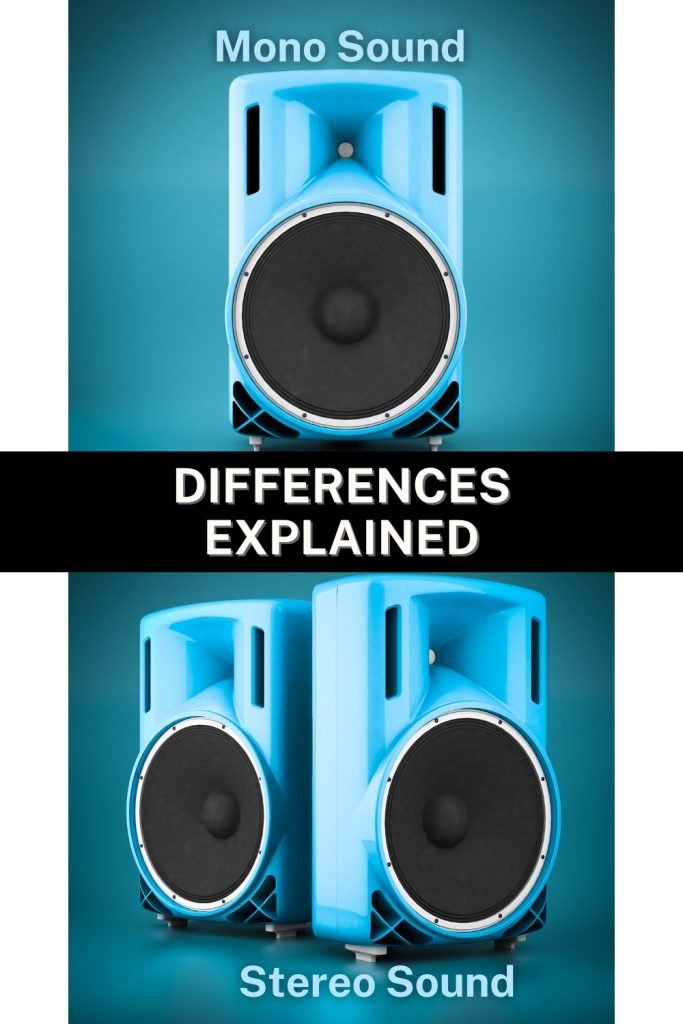