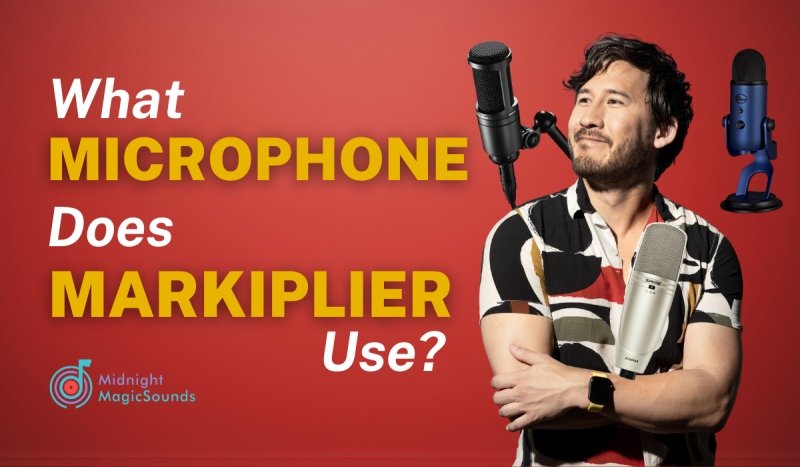 So you’re probably a YouTuber with a small channel wanting to bring more subscribers to your content. Or maybe you’re just a Markiplier fan who wants to have a similar sound setup to his. No worries, this guide is for you.

We’ll explain a few Markiplier mics that he currently and previously used. And for those wanting to get a better grasp of their YouTube channel, we’ll give a few tips to sound like him vocally.

Doing so will increase your audience engagement and make the most out of your channel. So let’s get started!

Markiplier is a YouTuber whose channel focuses on commentary and gaming. As of now, he’s the 6th largest YouTuber on the platform, with over 13 billion views and 26 million subscribers. Needless to say, he is a big deal within the YouTube community.

He created his first video on April 4, 2012. His first idea was to create sketch comedy where he would “multiply” himself by playing different roles.

This was similar to Eddie Murphy’s style of comedy and was the origins of his “Markiplier” moniker. When he noticed that gaming was becoming a big thing on YouTube, he changed his content.

His first videos showed that he did not invest in his audio setup, and his microphones weren’t working properly in the dark ages. Once his channel aged, so did the quality of his video production. Since then, he invested in high-end webcams for his streams and videos, and his microphones have gotten better.

Recommended: What Headset Does Pewdiepie Use?

What Microphones Does Markiplier Use?

Markiplier used a multitude of microphones throughout his YouTube career.

While he currently uses the Shure KSM44A and high-quality cameras, here are the microphones he’s used: Markiplier’s primary microphone is the Shure KSM44A. It is a large condenser mic that has a large diaphragm, which has multiple polar patterns. In addition, it features multiple voice patterns (bidirectional, omnidirectional, and cardioid), which is great for sound diversity.

Since it is a large-diaphragm microphone, it’s more suited towards male vocals. With the pads and patterns adjustable functionality, you can use this mic for guitars, up-close, drums, vocals, whatever you’d like to lose. It sounds great in use and even better when paired to a preamp. Markiplier recommends the Audio-Technica AT2020USB+ for those trying to start their blogging career. The microphone plugs directly into the PC’s USB port. This microphone is useful for podcasting, studio recordings, and voice-overs.

Also, it is a straightforward Markiplier mic that’s easy to use. After it’s plugged into your Mac or PC, you’re ready to go. Because of its Extended Frequency Response, the microphone can be used for home recordings and podcasting.

If you want to do field recording or voice-over, this is a great microphone to use. For beginners, Blue Yeti is a great microphone to get started. It has a tri-capsule array, which allows you to record three condenser capsules simultaneously.

When in use, it acts as three microphones at once. It also allows you to switch between stereo, omnidirectional, cardioid, and bidirectional. If you’re an aspiring YouTuber or streamer, you can stick to the cardioid pattern to get the most out of your vocals.

In addition, there is a mute button and a gain control knob. A 3.5 mm headphone jack allows you to plug the microphone into the headset directly. With the Blue Yeti, you can have great sound control over your voice without the added hassle.

There is a myriad of microphones you can use for your YouTube channel. Here are the most common types.

USB microphones are the most common microphones available. They are easy to set up. All you have to do is plug your microphone into the USB port, and you’re ready to go.

Fifine is a well-known brand for producing USB microphones. Check out this article to find out the 5 Best Fifine USB Microphones.

DSLR microphones are an excellent option for YouTube videos. They are mounted to the DSLR cameras via a hot shoe bracket.

Lavalier microphones are different from the other types because they’re attached to your clothing. It can be either budget-friendly or an expensive investment based on what you’re looking for.

This microphone uses omnidirectional audio and gives you an easy way to record when you’re outside. Use Lavalier microphones for outdoor vlogging, videos, or any video that needs a lot of movement.

Markiplier’s voice is loud, which is one reason why millions of people follow his channel. Since he started his YouTube channel, he started to use the platform to train his voice.

However, you can sound similar to this famous YouTuber with a few techniques:

Your audience hates when someone mumbles through the microphone. Sure, you know what Markiplier mic to use, but if you don’t enunciate your words clearly, then you might as well have a cheap microphone on your desk.

If you’re not used to speaking on camera, it will take practice. For example, news anchors practice their voice daily to get their voice modulation right.

If it doesn’t come naturally to you, train your voice for 5 minutes a day.  After 30 days of consistent training, you’ll have a voice that’s perfect for Twitch and YouTube!

Recommended: What Gaming Headset Does Ninja Use?

To keep your audience engaged, you need to sound enthusiastic about your topic. Having a monotone voice will only make them less likely to view your content.

Again, continue to have fun with what you’re doing and share your excitement with your audience!

Have a Casual Tone

No one likes a stiff speaker, whether you’re streaming or making a YouTube channel. You can create a script but write it casually. If you’re speaking live, relax and get comfortable. Pretend that you’re speaking to a friend and have fun with it.

Conclusively, Markiplier mics are useful if you’re trying to start a vlog or YouTube channel. When using the mic, always give yourself time to practice your voice.

By doing this, you’ll sound clear and confident once the camera starts.