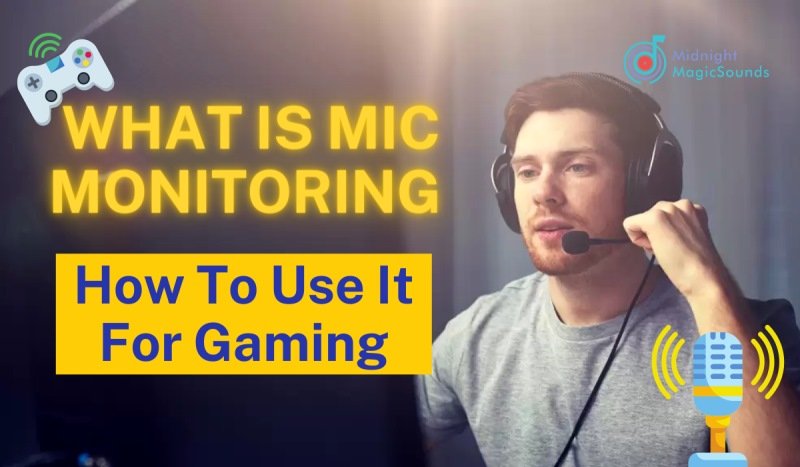 Are you playing games with friends or getting ready for your next conference call? Mic monitoring gives you the ability to control the volume of your voice without causing a nuisance to the others in the call. But how does it work? We’ll explain that to you.

Throughout this post, we’ll show you how to turn the mic monitoring feature on and off depending on your preferences and gaming platform.

By the end, you’ll learn how to utilize mic monitoring to create an enjoyable audio experience for you and your gaming group. So let’s begin!

What is Mic Monitoring?

To give a basic definition, mic monitoring is an audio feature that allows you to hear yourself. This works by placing the mic input directly into your headphones. Mic monitoring is a great feature for gamers who experience chaotic voice chats. In addition, it is good for people who receive constant calls at work.

However, it’s not limited to those two people. Mic monitoring is useful for people who want to call their friends or loved ones as well.

When people play video games, they rarely know how loud they’re speaking. Gamers tend to yell in excitement or speak louder than usual because the headphones cover their ears.

Because of this, the people who are hearing the player might have an uncomfortable experience. In some cases, the loudness can injure their eardrums.

Through the help of Mic monitoring, gamers worldwide had a sigh of relief. It allows users to hear themselves speaking on the headphone, which leads to a better experience for those that are present.

This allowed for a straightforward troubleshooting process because the user could hear and detect problems through the microphone.

Recommended: How to Stop Mic from Picking Up Keyboard Noise

Why Should I Use Mic Monitoring?

Mic monitoring has been out for a long time. However, not everyone knows how to use it correctly. Gamers tend to use this feature, and gaming brands have created devices around this. As stated earlier, it can be useful if done correctly.

Mic monitoring is used to make communication better. Having someone shout during a meeting or game, regardless of the intent, is not fun at all. You don’t want to have unreasonable audio for a work scenario such as pitching a product to a client.

Mic monitoring allows you to hear the audio quality. Thus, allowing you to adjust the volumes accordingly.

Having clear audio is important in gaming and professional settings. For example, if you’re in a meeting, the last thing you’ll want to do is continuously ask if they can hear you. For gamers, one command can mark virtual life or death. You would not have the time to ask your colleagues if they can hear you.

In these cases, microphone monitoring will come in handy. Since this feature allows you to hear yourself, you can determine if there’s too much noise or your microphone is cutting off.

Let’s admit it, shouting or raising your voice to make sure you’re heard can be frustrating. If only there were a way to monitor your voice to determine if you’re loud enough. Then this wouldn’t be a problem. That is where mic monitoring comes in.

FPS games have a lot of background noise. This can reduce the quality of the team channel. Mic monitoring lets you determine if you’re loud or not. Thus, ending the need to shout during a Call of Duty match constantly.

How Do I Turn On Mic Monitoring?

Each gaming platform has different ways to use mic monitoring. It’s easy to start, and most gaming devices have a mic monitoring feature. For most computers, this is not a default setting. However, each device can be synced to be used with it.

Now, it’s easy to sync your device with the mic monitoring settings. You can change the input and volume that’s along with it. On computers, this isn’t a default setting. If you’ve been confused about this, you aren’t alone. Other platforms and devices have multiple ways to set it up too.

Since there are multiple gaming platforms present, we’ll explain how to enable mic monitoring for each of them. That way, you can continue to enjoy your gaming sessions.

First, you need to take your mic and headphones and connect it to the PC. Since Windows 10 is a common OS system, here is how you can set it up:

Whether you have an Xbox One or a different platform, starting mic monitoring is a bit different. There is a 3.5mm jack in your Xbox One. But of course, it isn’t easily a plug-and-play process.

The good news is that there is a mic monitoring setting on Xbox. You can change the volume as well. This isn’t the same for every headset out there, and it will help you look at the user manual to see what differences you’ll find.

Still, there are some steps you’ll need to follow when you want to turn on mic monitoring for your Xbox:

Unlike other platforms, PS4 calls its mic monitoring settings “sidetone.” Just like the Xbox One, you’ll need to enable the mic monitoring feature on your PS4. It’s a default feature, but you can fix the volume to your preferences.

How Do I Turn off Mic Monitoring?

To turn off Mic Monitoring, navigate towards the Settings option and press “Devices.” Then press “Audio Devices.” Pick the “Sidetone Volume” and slide it to the left. To verify if you disabled it, you shouldn’t hear yourself anymore.

For the XBOX One,  go to the Xbox One screen and hit the Xbox button. Go to the System Tab and press “Audio.” You’ll notice three sliders and a “Mic monitoring” option. Move the slider to the left.

Gaming PCs have the most steps, but it’s easy to set up. Here’s how:

If you have completed the steps,  you won’t hear yourself through headphones anymore. Test the microphone in a group chat to ensure that it works properly.

Xbox is easier compared to PC when it comes to disabling the mic monitoring. Start by lowering the volume to 0. Reverse the steps from turning on the microphone and slide the sliders to the left.

If you want to hear yourself again, move the sliders to the right. Very simple!

Lastly, the PS4 can easily disable mic monitoring. While it’s not as easy as Xbox, here’s how to do it properly:

What Happens If You Hear Echos On The Xbox One?

Ever played a multiplayer game and started to hear an echo?

Hearing echoes is not normal. Echos can spoil your fun and derail your gaming experience, especially in multiplayer mode, where you have to communicate with your teammates.

In some cases, the loud echoes can potentially cause damage to you and your teammates’ eardrums. You need to fix your sound settings to solve this problem.

Don’t worry; there is an easy solution to this.

If you notice an echo, this is because your Xbox One party chat output audio is set to both the speakers and the headset. Change this by hitting the Xbox button and press “Settings” and “General.”

To fix the latency issue between a microphone and a computer, you need to know about audio latency. Digital audio latency is the time period for your audio to enter and leave the playback system.

This happens in a manner of milliseconds. This occurs through a digital-analog and analog-digital conversion. Buffering and digital signal processing play a role as well.

It’s challenging to have Latency-Free mic monitoring due to the different factors that cause it. Decrease the buffer size and close the other programs on the computer that have audio. Here are some examples to reach low digital audio latency.

Also, mic-monitoring with a zero-latency is the ideal sound setting. However, this isn’t always an easy feat. Whether you’re in a Zoom meeting, playing games with your friends, or conference calls, latency-free mic monitoring is the best option.

Read Also: How to Earrape Microphones

Do Every Headphones Use Mic Monitoring?

Not all headphones are made equal. If you have a pair of old headphones, chances are it does not have this feature. However, if you have a newer headphone model, then it will have mic monitoring as the main feature.

What Should I Do If the Headset Doesn’t Use Mic Monitoring?

In most situations, you’ll need a new headset/headphone that uses mic monitoring. Alternatively, you can use an amp for mic monitoring if the headphones are incompatible.

What Can Mic Monitoring Use For an Xbox?

With Xbox’s mic monitoring feature, you can hear your voice when speaking to the microphone. This gives you the ability to make real-time changes and feedback on the audio.

How Can I Stop Echos that Happen to Mic Monitoring?

The best way to stop echoes is by reducing the volume in the audio settings. This will help you solve the echo issues in your audio.

Because everything has benefits and drawbacks, understand that issues occur with mic monitoring as well. That is why we have additional reasoning and details for you to go with the mic monitoring. Here are some drawbacks to this feature.

Mic monitoring will pick up your voice if the microphone volume is too loud. But it’s not a dealbreaker. Decrease the volume to fix this problem. This means you can hear your voice but with no echo. Also, you might know that headphones have a sound baffle in them.

Some gamers have difficulty adjusting the monitor to visual and audio work. Conversely, people don’t like to hear their voices when speaking. So you’ll have to take time to get used to it, or master mic monitoring is an important thing to do.

Despite its drawbacks, mic monitoring is perfect for those who want better control over their voice. It allows you to hear your voice and reduces the need to speak loudly. Once you’ve mastered mic monitoring on your preferred platform, you won’t be the loud voice in the gaming lobby anymore!

Mic monitoring is the best option for sound control for video gaming. It allows you to control your microphone’s volume without irritating your teammates, and you can turn down the volume to stay focused on the mission.

Due to the popularity in gaming, expect more headphones to have mic monitoring and better features for effortless connections and adjustment.