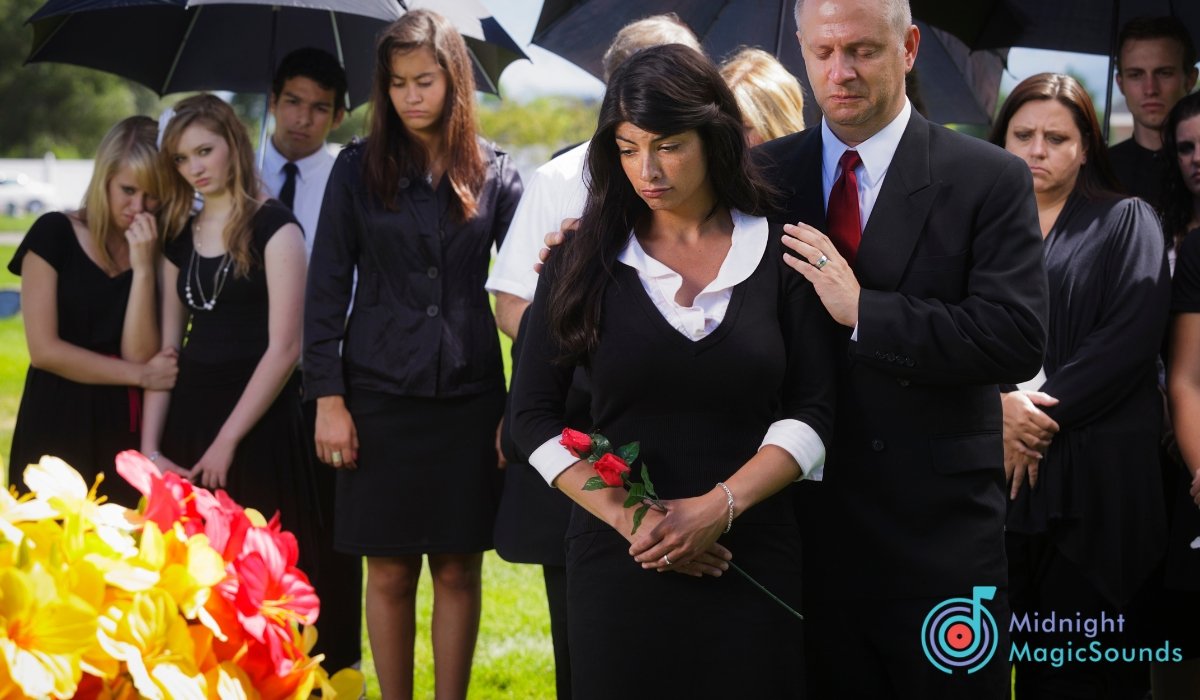 There are numerous memorial services where it is appropriate to play humorous songs to honor the deceased. While in some cultures, it is okay to do so, this compilation of songs not to play at a funeral contains some pieces that might not turn out that great if you attempt to use them.

Unless under the request of the deceased or closest of their kin, it would be best to avoid incorporating these tracks in a funeral song playlist.

Most of these songs that span from genre to genre have controversial themes that might add pain rather than relieve the stress of grief. If you want to use any of these tracks, you must mainly consider what the deceased likes and their sense of humor.

If you are left in charge of the music, you might consider some other song, but I found some bad funeral songs turn out great as it all depends on the deceased’s wishes.

21 Inappropriate Songs Not to be Played at a Funeral

Here are some tracks I would choose to cut off if they left me in charge of a funeral playlist.

1. Another One Bites The Dust – Queen

This is the first song on this list that you shouldn’t play at your loved one’s funeral unless they had a great sense of humor and were a Queen fan.

Though it is one of the British rock band’s best songs, more funeral-worthy songs can commemorate your loved one’s life. With its instantly recognizable main riff, the track is one of their top-selling record of all time.

The sheer amount of pettiness that the composer displays is one of the reasons why this is one of my favorite songs.

Though I like the piece, I wouldn’t play at any of my foes’ or friends’ funerals. The message in the lyrics is about despising someone so much that you blissfully enjoy their passing.

3. Roll Me Up and Smoke Me When I Die – Willie Nelson

Even if the deceased was a chain smoker like Willie Nelson, this is one track you should avoid playing. The artist released the song on April 20, 2012,  in his Heroes album.

The day is a well-known holiday associated with cannabis culture. As an avid pot smoker, Willie uses the drug as a muse in the composition of this song.

While Staying Alive is an iconic song, the lyrics of this song are too ironic to someone who died. While the beat of the piece is known in the medical field to perform CPR, it is one of the songs not to play at a funeral since the deceased is no longer alive.

Upon its release, the song hit number one on Billboard Hot 100 for four consecutive weeks.

5. Ding Dong The Witch Is Dead – The Munchkins

With respect to the deceased, this is a song you should avoid as it is double insulting to the person who passed on. Other than the theme of a song celebrating the deceased’s death, it goes further and calls them a witch. The song is part of The Wizard of Oz soundtrack.

The song’s lyrics talk about the inevitability of death and why we should have fear. The piece is a rock classic with complex lyrics as it deals with the supernatural.

Most of the band’s fans viewed the song as about suicide, but the writer Dharma said the inspiration was his heart condition, which made him guess he would die young.

To mask our pain for the passing of our loved one, we often set out the theme of a funeral to celebrate the life of the deceased. If you are tasked to make a compilation of upbeat tracks, avoid this piece by Kool and The Gang.

The song can fit in family celebrations but lacks a spot in a funeral as it might seem you are celebrating the death of the deceased, not the life.

With over a billion views on YouTube alone, this is one of the most famous songs not to play at a funeral. While the song’s themes are optimistic and apocalyptic, avoid it because the deceased already reached their final countdown.

Kelly Clarkson has proven that she is not like any ordinary composer, as she makes some of the most inspirational pieces I have ever listened to.

This track is meant to motivate and inspire someone after facing tribulation. While its lyrics might seem encouraging for a person who faced trying times, its context is not befitting a grieving moment.

It continues to amaze me that there is a cult following for this country ballad in which its lyrical content is about the murder of Earl. The trio composed this sweet and loving track about an abusive Earl whom they conspire to murder.

Somehow the piece found its way into the mainstream, becoming one of the popular songs by Dixie Chicks that will be inappropriate even for a horrible husband’s funeral.

NSYNC is a popular boy band formed in 1995 and is known for some of the biggest hits in the later 90s and early 2000s. This is not the appropriate song to play, as it is about leaving a bad relationship behind.

Bye Bye Bye was recorded and released in the band’s third studio album in 2000, and this song that signifies the end of a relationship got a Grammy nomination for Record of the Year.

This track was written and produced for the soundtrack of Despicable but has grown above the animation film to be one of the biggest happiness anthems in the world.

Pharrell Williams released the song in late 2013, and it became the best-selling song of 2014, with millions of copies sold globally. I don’t think anyone would be happy at a funeral, especially considering the inappropriate lyrics “Clap along if you feel like happiness is the truth”.

Bobby McFerrin, one of the most versatile singer-songwriters, has some of his songs cut across the genre barrier. Don’t Worry Be Happy has a calming rhythm and soothing vocals but is one of those songs not to play at the funeral to cheer anyone for the deceased passing.

Some can misinterpret the message as being blissful of the deceased’s death.

Though Highway to Hell is considered a rock classic, it is inappropriate for a funeral, even if the deceased was a rock fan. The song’s title alone will raise eyebrows for any religious person at a funeral, as it is considered that nothing is worse than going to hell.

This song assisted AC/DC in gaining a global audience, making them one of the biggest rock band’s ever to exist globally.

With over 100 million views on YouTube, This Heavy metal track is one of Avenged Sevenfold’s most popular records. The lyrics of A Little Piece of Heaven tell a story of a man who murders his girlfriend and commits despicable acts to her corpse.

The story evolves as she returns from the dead to kill her boyfriend and reconcile in death. Definitely not a song to play at a funeral.

Let It Go has Proved to be Disney’s most famous song as it has the most streams compared to other soundtracks from similar animated films.

Though Idina Menzel is powerful and quite encouraging, using it in a funeral service to console the bereaved family members may be deemed inappropriate. It might seem you are making a mockery of someone’s loss creating an uncomfortable situation.

17. I Will Survive – Gloria Gaynor

While this timeless classic is a hit that you might enjoy listening to occasionally, it is one of those songs not to play at a funeral. The context of the song’s lyrics can easily be an excellent fit for someone who survived life’s challenges.

Since the deceased is dead and did not survive, it may seem you are making fun of the situation rather than mourning the loss of the deceased.

Hells Bells is a tribute song the band wrote after their lead singer passed from acute alcohol poisoning. The bell tolls four times at the song’s beginning, creating a gothic atmosphere before a heavy guitar riff comes in to sweep the listeners away.

I found the vocals of Bon Scott’s replacement to be implacable, proving that he is a worthy replacement for a rock legend. However, I don’t think it would be appropriate to play at a funeral. Who knows, maybe the deceased passed away from similar circumstances.

Though the title of this song by Nirvana might seem religious, the lyrical contents are intentionally confusing and contradicting. They released this timeless piece at the height of the rock era and it contained some of the best vocals and instrumentals I have ever listened to.

Unfortunately, the lead singer later died from gun suicide, even though he sings that he did not have a gun. I don’t think anyone wants to play songs that mention these topics at a funeral.

The Beatles have some of the best songs ever composed that can celebrate or mourn the deceased’s life. A Day in the Life narrates two stories that John Lennon read in the newspaper.

One of them was about a car crash and he describes the details of how the person died. I don’t think a song like this should be played at a funeral.

While you might not want to forget the deceased, playing this track at their funeral would be inappropriate. This heartbreak song by Cee Lo Green is a cleaner version of one of his earlier works with lots of curses and wouldn’t be played on any mainstream media platform.

The track would be disrespectful to someone who passed when considered to be part of their funeral playlist.

The world consists of some of the best and most emotional pieces you can use to honor your loved one’s death, but this compilation of songs not to play at a funeral will be inappropriate.

While music helps us grieve, these songs talk about the subject of death comically, or the context of their lyrics might not fit in the theme of a funeral.

While some might have humor, and you find the song to enliven a gloomy mood, you know best how to show respect at your loved one’s funeral. Personally, I wouldn’t automatically dismiss all the songs if my friends and family chose to play them at my funeral.