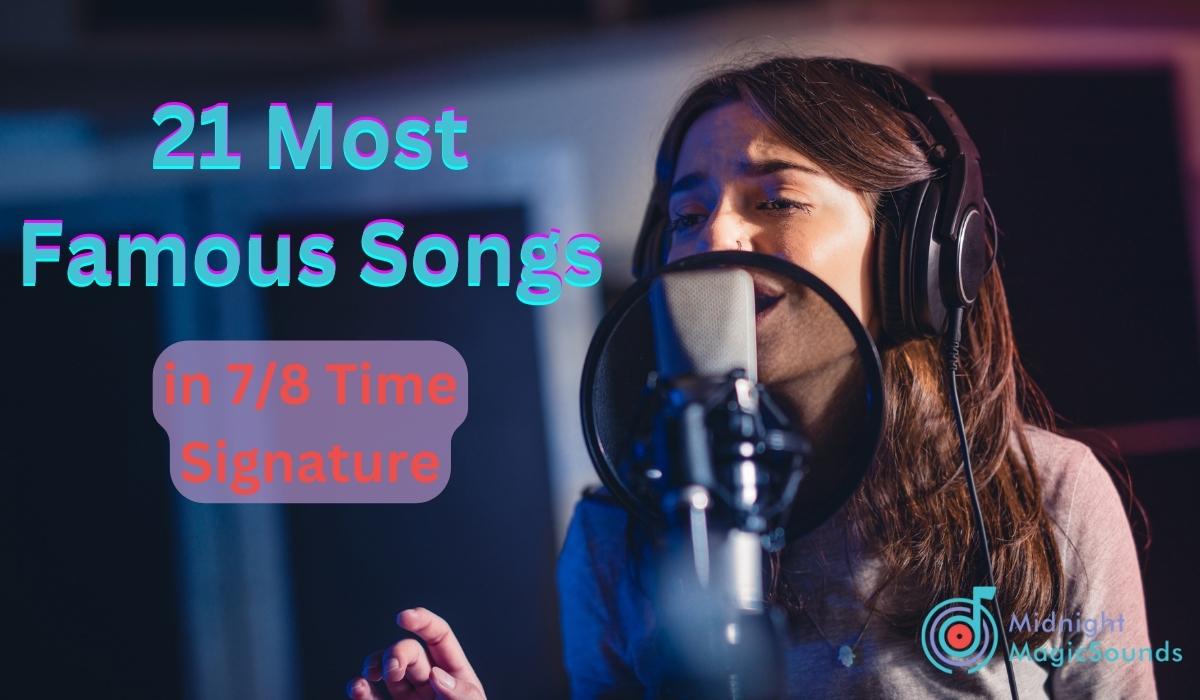 While most songs are composed in a common time signature, there are several popular songs in 7/8. Though this signature is uncommon, after listening to a couple of songs, I discovered that the odd time signature is present in most genres.

This compilation consists of some of the most popular songs where composers use this odd time signature. 7/8 offers a different feel and pace from what listeners are traditionally used to hearing.

Most of the songs that feature this time signature also incorporate other time signatures to create a unique rhythm or to note a change of pace in the song.

Since songs in 7/8 time signature are not that common, if you are an artist and experimenting with new rhythms, just using it will make your piece stand out.

Be ready to get your groove on and rock to these non-standard tunes that I compiled. I hope some of them entertain you.

21 Most Popular Songs in 7/8 Time Signature

Without further ado, here are my top picks of songs in 7/8 time signature.

The first song in this playlist is by King Crimson and was released in 1981. The song shows the group’s mastery in bending any rhythm to their will, making a complex instrumental quite pleasing to hear.

If you want to test your advanced guitar skills, this piece will be the perfect fit as it might offer the challenge you require.

The English band released  The Ocean’ in their album titled “House of the Holy.” Upon its release, the song received a positive review with some critics calling it an unappreciated gem as it takes the listeners back to the swaggering hard rock roots.

This is one of the few songs to which all the bandmates share writing credits.

With nearly 40 million views on YouTube, Solebury Hill is perhaps one of the most famous rock songs in 7/8 time in this playlist. The song’s composition is quite complex with the lyrics having a profound meaning.

While I have taken time to study and listen to various songs at odd times, I have never encountered a song that works so smoothly as this piece.

4. All You Need Is Love – The Beatles

I was surprised to learn that The Beatles made a song n this odd time signature. All You Need Is Love is one of the biggest anthems by the band that John Lennon wrote in the mid-60s.

The massage of the song is quite clear in its interpretation as the band wanted to show the world that love is everything people need.

The Nine Inch Nails band experimented with many instruments and rhythms to create a unique sound in the music industry.

March of the Pig is a perfect example of the band’s ability to merge their vocals to the high-gain guitar chords with the song’s basic riff being in 7/8.

The lyrics of this track are inspired by a free-spirited individual named Tom Sawyer, a character in Mark Twain’s novel. Though the song is mainly in 4/4 time, there are certain bits on the track where the composers switch to 7/8 time signature, mainly when the guitar riff and solo start.

Rush is one of the best progressive rock bands in my opinion.

When the lead guitarist was interviewed by New York Magazine about the band using an odd time signature on this song, he credited their choice and uniqueness to the band’s strife to always sound different.

The theme of the song correlates to George Orwell’s novel where big brother was telling people that 2+2=5 instead of 4 which they once knew to be correct.

8. Anyone Who Had a Heart – Dionne Warwick

Burt Bacharach and Hal David wrote Anyone Who Had a Heart for Dionne Warwick. Upon the song’s release in 1963, it reached the top 10 in several country charts because of Dionne’s mesmerizing vocals.

Over the years, several popular artists such as Cilla Black made renditions of the song. It has also been translated into many languages solidifying its status as one of the best songs that incorporate 7/8 time signature.

As the song title suggests, this legendary orchestral piece is in 7/8 time signature. To achieve the song’s objective which was setting it at the odd time, the orchestra used two different drummers who were playing in two different styles and I could only hear the sound coming out of two separate channels.

Considered one of the most controversial musicals ever composed, The Temple geared us with a great rock opera song.

This particular piece takes the listeners through the popular story of Jesus walking to the temple and discovering it has been turned into a market.

Several songs by Rush are in 7/8 time, but this piece stands out to me because of the dedication they put into composing and recording. Although it is 10 minutes instrumental, listening to it isn’t that hard of a task, especially for progressive rock fans such as myself.

The piece has over the years been sampled by popular bands such as They Might Be Giants and Devo.

Released in 1985, Heart of Lothian reached the top 30 singles in the UK. The band composed the track with an array of time signatures.

After carefully listening to it, I noticed that part of it was in 7/8 and 5/4. Steve Rothery’s key guitar skills bring a great atmosphere.

This song is a prime example of the band’s ability to experiment with multiple time signatures. Schism is possibly among the few select metal songs in 7/8 to get a Grammy award for Best Metal Performance.

The first time I listened to this iconic piece, I was overwhelmed as I had a clear sensation that I was witnessing a true masterpiece from the English rock band.

The track got its inspiration from Marvin the Paranoid Android, a character in the science fiction saga titled The Hitchhiker’s Guide to the Galaxy. The song can influence how you listen, absorb and play any type of music.

Gordon Matthew Thomas Sumner, commonly known as Sting, has accomplished a lot in his music career. Like a Beautiful Smile combines a trickily off-kilter 7/8 time, a catchy melody from Stevie Wonder, and Shakespearean lyrics.

Recommended: 21 Famous Songs About Hating Yourself And Self Loathing.

It is songs like Dreaming in Metaphors and the rest of the songs by Seal made me have an interest in odd time signatures.

The song is a bit mellow than the other songs in the compilation but still a good choice if you want a simple song to practice playing music in this time signature.

Ruby Love is a song that gave Cat Stevens the best opportunity to showcase his Greek influences in the music he composes. It is a good piece to practice your advanced guitar skills as it has a more energetic rhythm and accentuated pattern.

The next piece in this list of songs in 7/8 time signature is one of my favorites. This is because it’s the theme song for Wonder Woman.

If you are a superhero film fan and a music lover, you might be familiar with the works of Hans Zimmer as he has graced us with some of the best soundtracks that create the perfect feel by capturing our attention to a movie through his music.

As the song title suggests, this piece is composed in 7/8 time. Listening to the magical sounds from the track you will feel as if the instruments want to communicate and say something.

Yanni’s composition is astonishing, proving he is a musical genius. If you have ever wondered what the melodies in heaven sound like, then I believe Waltz in 7/8 is the closest experience to it we can enjoy here on earth.

This song is perfect, and the most captivating thing about the song that captured my attention is the transition from the acoustic solo. This type of composition made me discover the level of Steven Wilson’s genius.

The last track on this playlist is the theme song for Doctor Who. Murray Gold is considered among the best music composers and has received 5 BAFTA nominations for his work.

I still haven’t found a better orchestral theme song that can be compared to this track.

There you have it, these are some of the most popular songs in 7/8 time signature that deserve a spot on your playlist. This compilation contains songs from different generations and genres that will entertain you and offer you a challenge in learning to play music in this odd-time signature.

The songs in this list are good for any occasion for you to enjoy by yourself or share with friends.