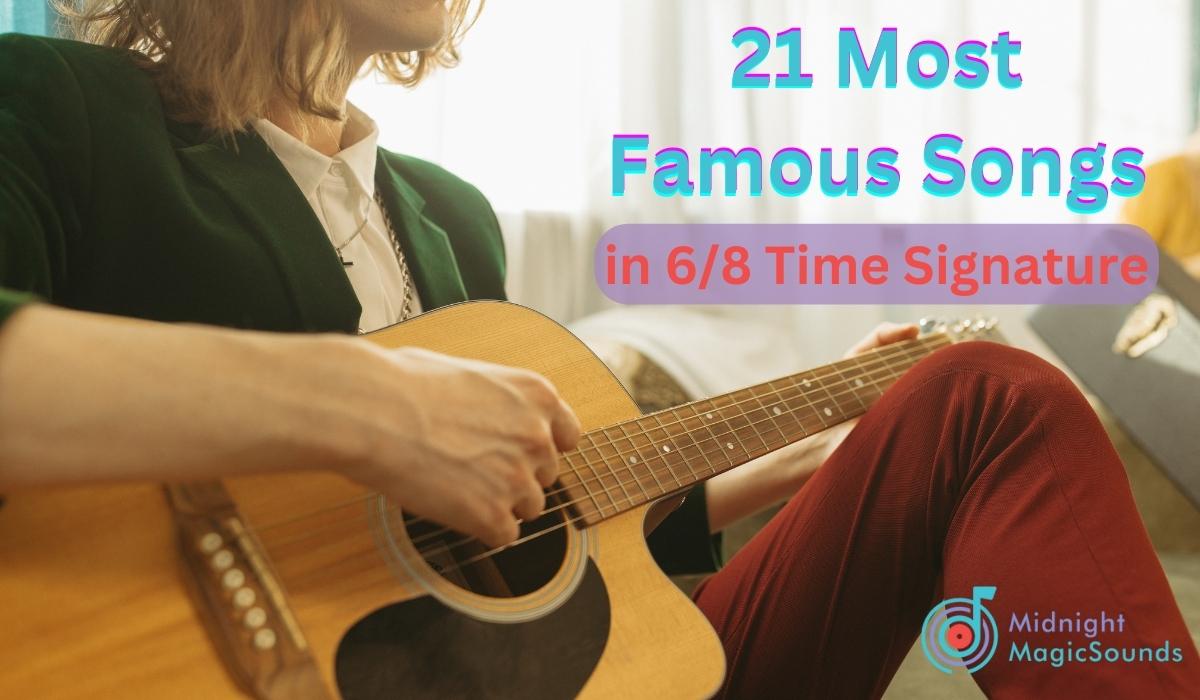 Exposing yourself to different playing styles and genres is the best way to grow your instrumentation skills. I found playing pieces from different time signatures a great first step to improving and perfecting my craft. Some of the best songs in 6/8 time signature have been an incredible first step when venturing into more rhythmic patterns.

If you are looking to improve your guitar skills, these songs can greatly assist you as they offer the right balance of complexity and challenge.

21 Most Famous Songs in 6/8 Time Signature

These are some of the most popular songs in 6/8 time that you probably have heard before.

1. We Are The Champions – Queen

The first song on this playlist is by the legendary band Queen, and I found it is a wonderful balance between delicate and wildly boisterous. The track was composed by Freddie Mercury when he was thinking of football.

The lyrics summarize their real-life struggle for music success. It is easy to hear the instruments hitting the 6/8 time signature on the drum part.

2. House of the Rising Sun – The Animals

The manner in which Eric Burdon delivers this masterpiece still gives me chills every time I hear this song. His powerful vocals give this song’s delivery a sense of sincerity and realness.

It is because of that skill that made it hit number one on multiple charts from around the world.

The song was originally written for the Twilight Saga’s soundtrack in 2011, the romantic vampire-themed film series that was a hit.

Its popularity made the track gain over two billion streams and still rising steadily. I adore this piece of the memories it carries, and I hope its popularity never fades for the next hundreds of years.

4. From The Inside – Linkin Park

With over 134 million views on YouTube alone, “From The Inside” is one of the most famous rock songs in 6/8 time to have been composed. The song has a relatively slower tempo compared to most songs in the category and possesses a unique chord progression.

While the track might be challenging to play, it provides the right balance of challenge and entertainment for beginners learning to play instruments.

Norwegian Wood is one of the best 6/8 timepieces in stereo that I have ever listened to. The way the song switches from left to right channels gives it a unique sound and beautiful feel.

Each syllable on the song’s lyrics hits the right note perfectly, with the emphasized words hitting the underlying quarter beats. This song went on to inspire a novel nearly two decades later with the same title.

6. You Lost Me – Christina Aguilera

You Lost Me is a slow-tempo ballad, a writing collaboration between Christina Aguilera, Sia, and Samuel Dixon. She released the track in 2010 in Christina’s sixth studio album, receiving positive critical reviews.

A piece of cake for any guitarist, the song is played with 9 simple open chords in a slow tempo in the 6/8 time signature.

Five Years’ lyrical contents are self-explanatory as it talks about the collective breakdown of the earth due to an impending apocalyptic disaster that will happen in five years.

I found this song as one of David Bowie’s best-written songs as he detailed several actions people take upon learning of the news. The lyrics make you feel that you are part of it as the world is ending.

Dangerous Woman is from Ariana Grande’s third album with the same title. The confidence that the artist possesses is contagious.

The powerful ballad is one of Ariana’s most popular songs, with the artist receiving a Grammy nomination for Best Pop Vocal Album. It is one of the simplest songs in 6/8 time signature to play in this playlist, making it beginner friendly.

Blue Ain’t Your Color is probably Keith Urban’s most popular song. The song takes us back to the classic world, having a good beat in a 6/8 time signature.

His smooth vocals are enough to make this song a bestseller. He is expressing his love to a lovelorn woman suffering from the pain of a problematic relationship.

10. Nothing Else Matters – Metallica

Despite having elements of Waltz time, the band also incorporated some instrumentation with 6/8 time in this powerful ballad. It is among my top 10 hard rock songs of all time despite the band being quite different from their usual sound.

The guitar solo is the dream of every guitarist to play. The piece is indisputable and timeless, as the number of views across multiple streaming platforms is a testimony to that fact.

This is one of my favorite records by Radiohead, as its soundscape creates emotions that few songs can achieve. It is amazing how the song’s instrumental can express so much more and make you see through the composer’s eyes.

Thom Yorke was inspired to write this song after his mind buzzed with the thoughts of alien abduction. The song enables us to see the world from an alien’s perspective.

This song was released in 1977 and immediately entered the Billboard Top 100 chart. The lyrics composition of this song is a message to his wife about how he’ll always love her and ignore her flaws.

You have heard Hallelujah as there are numerous covers of the track. Originally written by Leonard Cohen, Jeff Buckley’s rendition of this powerful ballad made it a great success.

The track is considered a definitive rendition as the artist’s vocals and the guitar melody adds the emotions intended, making it one of the best songs in 6/8 time signature.

While listening to the song, It is quite clear that the triplet beats are grouped in pairs. This 6/8 time signature ballad was the composer’s dedication to then-fiancée and now-wife Cherry Seaborn.

The dedication by the composer to pour his heart out the best way he knows made us get one of his best songs. The song has so far surpassed 3.3 billion views.

“Can’t Help Falling In Love” is Elvis Presley’s most popular song, as it has many covers from popular artists. Songwriter George Weiss wrote the soundtrack of Blue Hawaii the song, and he based it on a French song called Plaisir D’Amour.

Though most people assume the song’s theme is romantic, that was not the case as it was sung to the grandmother of Elvis’s love interest in the movie.

“Call Me” was a massive hit that managed to top several charts upon its release. The song was composed for the movie American Gigolo.

The message in the song is based on the composer’s relationship with the addressee, which is both material and sensual.

The contribution that Paul McCartney has made to influence society musically is far too great. The first time I heard this magnificent track, I was mind blown as he had decided to be the bigger man.

The song is his way of offering an olive branch to John Lennon after the Beatles breakup. While other songs in 6/8 time signature are easier to discern, this piece needs time and patience.

The legends behind “Demons” and “Radioactive” composed this piece about the decision not to live in the past. The song encourages its listeners to always look forward to the future.

In an interview, the band said that this is one of their easiest records to write and produce as they did it in one take.

Fragile is one of the few hip-hop songs in 6/8 time that I passionately admire. It was a collab between Tech N9ne, ¡MAYDAY!, Kendall Morgan, and Kendrick Lamar.

The song’s message is about criticism towards song composers and the damage the critics make. The famous hip-hop artist eloquently showed how fragile they are as artists despite sometimes acting unbothered by other people’s opinions.

This track made me realize how versatile songs in 6/8 time are. In this piece, the rhythm pattern is in the electric genre. This a confirmation that 6/8 works well on multiple genres.

The EDM track was a successful hit in the UK. With over 400 million views this was one of the earlier tracks by Sam Smith before he became a global sensation.

The last song in this compilation is one of the most popular songs from the best musical I have ever watched. Mitchelle Williams performs the song in the movie, and her vocals follow a melodically pleasing slow rhythm.

Also called the compound time signature, this type of tempo is commonly used in faster pieces. These songs in the compilation are a mix of both beginner and intermediate-level learning and can enable you to master different ways of approaching 6/8.

This playlist contains multiple songs from different genres and generations.