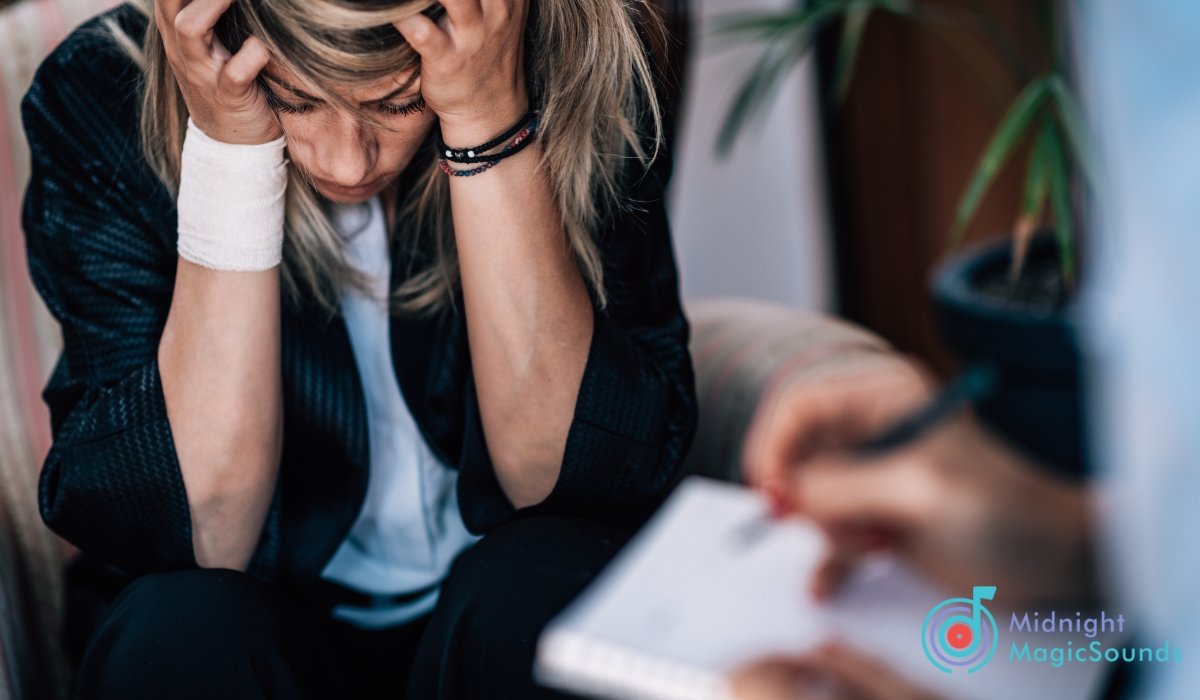 Multiple reasons would make people have the thoughts or will to hurt themselves. Most of them do it to punish themselves for the feelings and experiences they have. While it might be difficult to suppress such feelings and thoughts, I found listening to songs about self-harm helps me deal with my anxiety and makes me relate to another person’s experiences.

Most of these songs in this compilation have graphic lyrics that can be a trigger to some, or they can help you cope and make you see it gets better. The list shows that the theme and topic of self-harm span multiple genres, and though music is constantly evolving, the message is more relevant today.

If you are experiencing thoughts of self-harm, let these timeless classics help build courage in you to seek professional help and address the underlying issues that may trouble you. May these tracks be the first step of your healing journey.

21 Songs About Self-Harm That Can Help You Heal

Without further ado, these are some of my favorite songs that help me address the issue of self-harm.

The first song on this compilation is my go-to song when I feel overwhelmed by the feeling of worthlessness. The lyrics on this track helped me be stronger than my urge to end it all.

The lesson that I learned from the song is to let go of the pain and the hurt so that I can allow myself to be helped. This cry for help is necessary for anyone who has thoughts of self-harm and can be the difference between getting help or losing your life.

Breathe Me is a melancholic song accompanied by a piano melody that on its own sets the mood. The song’s theme centers on depression, self-harm, and the need for support to lean on.

Sia composed the song from a personal perspective out of the tribulations she was facing, and in an interview, she admitted she wrote the song the night she attempted suicide.

I think that Hate Myself is a masterpiece as the artist perfectly takes us through the mind of a depressed and suicidal person.

He shows us the thoughts of wanting the pain to end and wanting relief by committing suicide, but at the same time, they don’t want to die. Listening to the song while facing the same struggles can show you that you are not alone.

Papa Roach is a revolutionary rock band known for the best hooks and memorable melodies that will last a lifetime. Last Resort is one of the most popular self-harm songs; besides being hard-hitting, its lyrics talk about mental issues.

The track has a memorable instrumental that makes me repeatedly listen to the piece years after its release.

While Deliberate Self Harm Ha Ha is one of their least-known tracks, Of Montreal was popular for some pop indie songs.

The song’s lyrics venture into the brain of a person who self-harms and looks at the factors that lead them to do so. The band holds society accountable for creating an environment where someone is constantly doubtful and anxious.

The lyrics of the song directly speak to any person who has ever had the thought or did the act of self-harm. While others might view self-harm as a cry for attention, the artist acknowledges that it is difficult to know what is going on in peoples’ life to take the pain on themselves.

The composer portrays himself as God and offers to be available and bring comfort, which most victims of self-harm need to help them heal.

Stan is one of the most famous tracks by Eminem that narrates the story of a crazy fan that he has. The guy constantly writes letters to Eminem.

He is so obsessed that when Eminem doesn’t give him the response he’s asking for, he commits suicide.

With over 135 million views on YouTube, the piece proves to be one of the most popular songs about self-harm. According to the composer, we have 2 choices in life: knives and pens.

Knives represent self-harm while pens represent creation. If we make good life choices, we will be able to overcome any obstacles.

Recommended: 21 Inappropriate Songs Not to be Played at a Funeral.

Ghost by Badflower addresses feeling worthless even by being around those close to you and being suicidal. The song’s lyrics see the main character wants to end it all several times, and with each attempt, he gets closer to dying.

The song lyrics are relatable to anyone experiencing anxiety and battling depression. Though the story of the character did not have a good ending, the track shows suicide is not a solution.

10. She Talks To Angels – The Black Crowes

She Talks to Angels is a witty track that talks about self-harm through drug addiction. It is about a girl that masks her pain by taking heroin and someday she’ll close to dying of an overdose.

Angels calling out her name in the chorus perfectly represent this addiction.

Occasionally I find myself listening to the song while I am at rock bottom. While I am now older, I have lost count of the times the song has gotten me through a hard place.

The song’s lyrics talk about the themes of loneliness, depression, and the peculiar hope that self-harming is the solution to your problems. Mark Hoppus wrote this when he was in a state of depression about being on tour and away from his family.

With over 437 million views, this song is one of the best songs that explores the theme of self-harm and gives hope to viewers for a better tomorrow.

The song talks about themes of suicide which is often a thought that crosses the mind of victims suffering from depression and ends on a positive note.

This is the saddest song of them all in my opinion. The album “One More Light” and this song specifically is thought to be Chester’s suicide note.

It is believed that this was the last song that Chester Bennington recorded before he took his life away. He sings about how it won’t be a big deal if he takes his life away.

Trent Reznor originally wrote the song, but this powerful cover by Johnny Cash makes this track a masterpiece. Johnny’s incredible vocals made the song relay a message of sadness that anyone who has ever thought of hurting themselves carries.

It is relatable lyrics that talk about themes that affect many people in their daily lives that have made many listeners heal from their troubles.

While the tune and the instrumental of the song sound very optimistic, the lyrics carry a heavy message of self-harm. I believe this was an intentional choice by the band.

They wrote a happy upbeat melody that has suicidal lyrics. This describes people who suffer from these feelings: on the outside, they pretend to be happy while on the inside they need help.

16. The Way She Feels – Between The Trees

The Way She Feels narrates a deep story about a girl who self-harms by cutting herself regularly, as a means to forget her psychological pain. Her parents discover what she does and take all sharp objects away from her, and she becomes furious.

Later her father sees what she had been doing and comforts her. She finds solace in her father instead of the razors she was accustomed to.

Baby Don’t Cut is an emotional song about self-harm about a boy whose girlfriend cuts herself to cope with her life’s pain. The girl resorts to cutting herself due to the bullying she is getting at school, and despite her boyfriend’s pleading efforts, she does it again.

This very touching story describes what people who suffer from these feelings experience in their daily lives.

This is Linkin Park’s ninth track in their second studio album, Meteora. Upon the song’s release, it became the fifth consecutive single to reach number one on the Billboard Modern Rock Tracks, a record nobody else has broken yet.

It talks about someone that has the tendency to harm himself physically and mentally. The song’s lyrics are a message to always be cautious and check out those we care for, as some might be consumed with negative emotions.

The song was composed with no filters from the artists to show their strong opinions and experiences with self-harm. It features strong instrumentals with a a heavy guitar riff that suits the song’s theme.

While it is known that Lil Peep Battled depression and mental health problems, this unreleased record gives us a clear picture of what he was dealing with.

Though the track is only one minute, it connects to the listeners and relates beyond what longer songs do. Perhaps overwhelming, encompassing melodies will be your first step in healing from whatever you are going through.

The last song in this compilation is Popular Monster which focuses on depression and the sadness surrounding mental illness. The song’s lyrics capture people’s pure rage because he has been rejected by society.

Most of these songs about self-harm sensibly tackle the topic by showing us that we are not alone and there is hope.

While the subject is tricky, and I find most people around us avoid it or address it poorly, it is good to listen to a few songs that show us the dangers of doing so. This compilation proves that though the topic might seem depressing, it requires immediate attention.