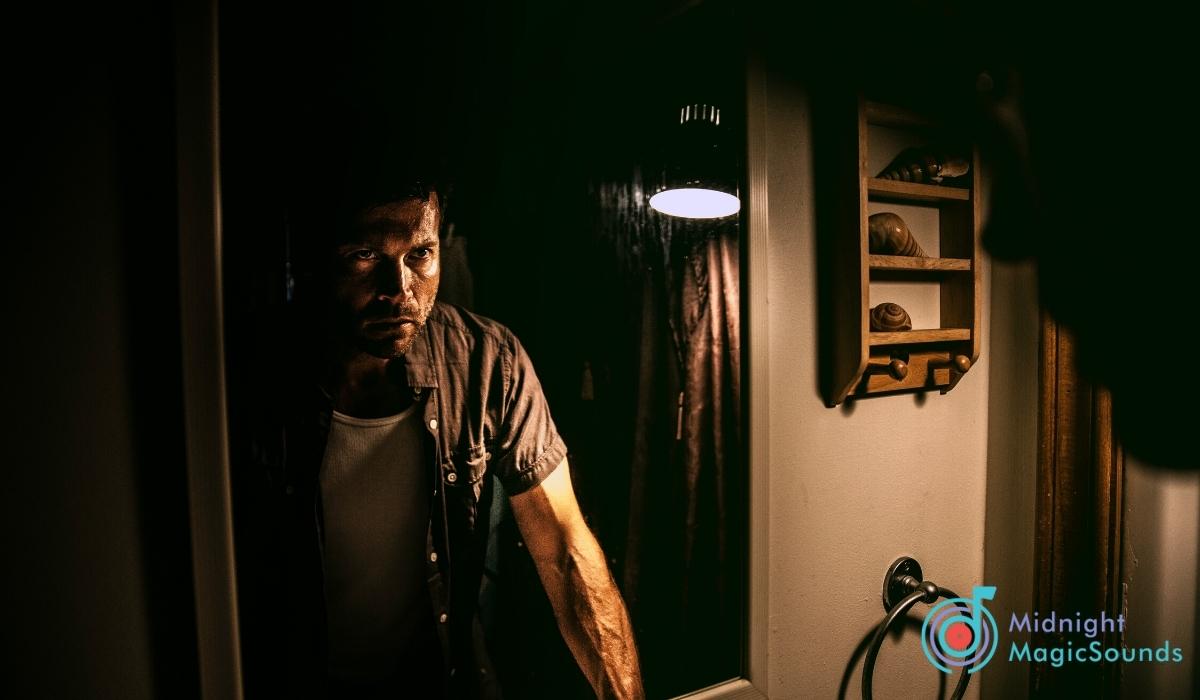 There are times when we feel happy and sometimes angry. We have also felt paranoid at one point or another. Musicians feel the same way, too, sometimes, and express this through song.

Artists generally talk about different kinds of paranoia in their music. Some will talk about the fear of the government constantly watching their moves, while others express fear of being hurt by their loved ones.

The following is a list of the top 21 songs about paranoia you can add to your playlist.

These 21 songs about paranoia feature different artists and forms of paranoia. Keep reading the article to find out more.

English alternative rock band Radiohead starts off this list with their lead single, “Paranoid Android.” The track is from their third studio album, “OK Computer,” released in 1997.

The song’s original version was close to fifteen minutes long and had some of the solos edited to shorten it. The track discusses the writer’s feelings of confusion and losing control of his environment.

Thom Yorke, the song’s composer, drew inspiration from a night out gone wrong for him. He claims that he felt that everyone wanted something out of him, making him have a claustrophobic feeling.

“Paranoid” is Post Malone’s first single off his second studio album “Beerbongs & Bentleys.” The song was released in 2018 under Republic Records and is categorized in the hip hop/rap genre.

The track peaked at number 11 on the Billboard Hot 100. Post Malone talks about feeling unsafe in his surroundings.

He states that his paranoia causes him to lack peace, wondering when they’ll be coming for him. He also claims that he’s forced to make paranoid plans, even sleeping with a gun with him every night.

American rock band Green Day is known for its controversial and sometimes political tracks. However, their song “Basket Case” takes a different turn. It was written by Billie Joe Armstrong, Tre Cool, and Mike Dirnt and was released in 1994.

It addresses and compares the feeling of being stoned. Billie Armstrong suffered from panic attacks early and decided to deal with them by writing the song.

“Lights” is a track by English singer Ellie Goulding from her album “Bright Lights.” It was released in 2011 but was recorded three years earlier. “Lights” was well received and certified six times platinum by the Recording Industry Association of America (RIAA).

Ellie discusses her childhood paranoia from not having the lights on while sleeping. She states that the lights kept her from turning to stone, a reference to the British group Electric Light Orchestra.

5. I Thought I Heard You Screaming – Benjamin Booker

The track “I Thought I Heard You Screaming” by Benjamin Booker was from his self-titled debut album. The song was released in 2014 and is classified as indie rock. Both the song and album were critically acclaimed.

The song reflects on Booker’s time in college when he had paranoia due to his concern for the girl he was living with who was addicted to OxyContin.

He states that one night, his paranoia led him to believe that his girlfriend was screaming even though she wasn’t.

6. Afraid of Everyone – The National

“Afraid of Everyone” is a track from the American rock band “The National” released in 2010. The song is by Matt Berninger and Aron Dessner and is from their fifth studio album, “High Violet.”

The song discusses the protagonist’s need to keep his family from great danger. He claims he gets paranoia from thinking about not hurting those he likes.

“Paranoid” is a track by English heavy metal band Sabbath released in 1970. The song is from their second album, “Paranoid.” Several movies and video games have used the song, such as Dazed and Confused, We are Marshall, and Guitar Hero III.

The track talks about the protagonist’s paranoia caused by not being satisfied with what he has in life. He seems to be going insane because nothing seems to make him happy. The protagonist claims that it’s too late for him to enjoy life.

“Paranoid” is a track by American rapper Jarad Anthony Higgins, popularly known as Juice WRLD. The track is from his Bingedrinkingmusic EP released two years before he died. Nick Mira produced the song. The track had critical acclaim.

Juice talks about his paranoia when dealing with women and his addiction. Due to past struggles, Juice finds it hard to trust again as his addiction continues making his life miserable.

Known as one of the most successful heavy metal bands worldwide, Iron Maiden has a 22-time platinum certification. Their track “Futureal” was composed by Blaze Bayley and Steve Harris. The song is from their album Virtual XI.

The title Futureal is a combination of the words future and real. Blaze Bayley describes the track as paranoia that what the media reports might not be accurate. The protagonist asks the listeners if they believe what they see, hear, or feel.

“Gas Panic!” is the sixth track off Oasis’s fourth album, “Standing on the Shoulder of Giants.” The track was released in 2000 and was composed by Noel Gallagher.

The song “Gas Panic” describes a supernatural encounter that leads to physical confusion. Noel describes his encounter as the Devil taking over him making them not know who they are. The lyrics are based on Noel’s panic attacks he experienced from taking prescription drugs.

11. Gotta Get Away – The Offspring

The Offspring’s single “Gotta get Away” is the third single off their album “Smash.” The song was inspired by a previously recorded track called “cogs” while the band was known as Manic Subsidal. “Gotta Get Away” was released in 1995 and was modestly received.

The song is about a paranoid person. This was the theme probably because the band was under pressure to complete the album within a given deadline. This made them paranoid.

Paranoid is Ty Dolla $ign’s second single off his debut album E.P. “Beach House E.P.,” released in 2013. He and B.O.B recorded it under Tylor Gang and Atlantic Records. The track was well received and peaked at number 29 on Billboard Hot 100.

The song talks about the protagonist being under constant paranoia about being caught cheating. He knows his girlfriend will not approve of what he’s doing behind her back. He states that his paranoia is torturing him more than anyone else involved.

Kanye West graces the list of songs about paranoia with the track “Paranoid.” It was released in 2009 and was classified under the new wave genre. The song also features Mr. Hudson and Kid CuDi.

The song describes the protagonist’s relationship with a lady who seems paranoid that he’s cheating on her. In the song, he tries to calm her down by telling her not to worry about it. He advises her to quit worrying about what they can’t control and focus on their relationship.

From Maybach Music Group’s founder, Rick Ross is the seventh track off his eight-studio album “Black Market.” The track was released in 2015 and was produced by Jahlil Beats and Antman Wonder.

Rick Ross came up with the song’s title while in prison by rubbing his fingers together and describing the texture as a mix of a crocodile and a python. The song talks about Rick Ross’s paranoia that those closest to him want to harm him.

He also talks about those around him wanting what he has to the point they want to kill him. Rick Ross stated that he wrote the lyrics based on what was happening to him at that time.

From songs about paranoia, we move on to Jess Glynne’s “Hold My Hand,” which discusses dealing with paranoia. It’s from her album “I Cry When You Laugh,” released in 2015. The song peaked at number 1 on the U.K singles chart and 86 on the Billboard Hot 100.

The track talks about the protagonist seeking reassurance from her partner that he’ll never let her go. She says that putting her arms around her whenever she’s in an unwanted situation tells her everything’s alright.

Several versions of the song were released, with the recent one in 2006. This song talks about the protagonist being paranoid that he’s under constant surveillance.

“Is There a Ghost” is Band of Horses’ first single off their “Cease to Begin” album. The indie rock track was released in 2007 and became the band’s first charting single in the U.S. at number 34 on the US Alternative Songs chart.

The track keeps repeating two phrases; “I could sleep” and “Is there a ghost in my house.” Ben Bridwell, one of the song’s co-writers, said that he got inspiration from his feelings of paranoia. The singer thought he was always being watched and his ice maker was scaring him.

Mutemath was a band formed by singer, songwriter, and instrumentalist Paul Meany. Mutemath initially started as a band with band member Darren King but decided to continue as a solo act after his departure.

The track was from the album Odd Soul, released in 2011. The song discusses the paranoia caused by religious upbringing. Darius stated that he lived with paranoia from believing he would be left behind if the rapture happened.

Kanye West, or Ye as he was known after the album “Ye” was released, is the brains behind the track “Yikes.” The song is co-written by Ye, Drake, Ayub Oganda, and CyHi.

The Jonas brother’s track “Who’s in Your Head” was released in 2021 under Republic Records. The song featured an upbeat, funky tune and was well received, peaking at number 12 on Billboard adult top 40 contemporaries.

The song talks about the singers’ paranoia that their partners are not giving them enough attention. As they lie in bed at night, they worry their lovers are thinking and dreaming of someone else.

The track “Price on My Head” is written and performed by Canadian rapper Nav. He features vocals from fellow Canadians on the Weekend and is produced by Derek Wise.

The song was released in 2019 to warm reception, peaking at number 29 on Billboard U.S. Hot R&B Hip Hop songs. The Weeknd sings about having a bounty on him.

His situation has made him so paranoid that he struggles to sleep at night and keeps a knife close to him. He feels he’ll only be able to truly rest when he is dead.

These top 21 songs about paranoia tell us more about the fear that most artists have about their life, government, and the unknown despite being superstars.

They can be a good source of motivation, especially when they advise us on how to get over this state.