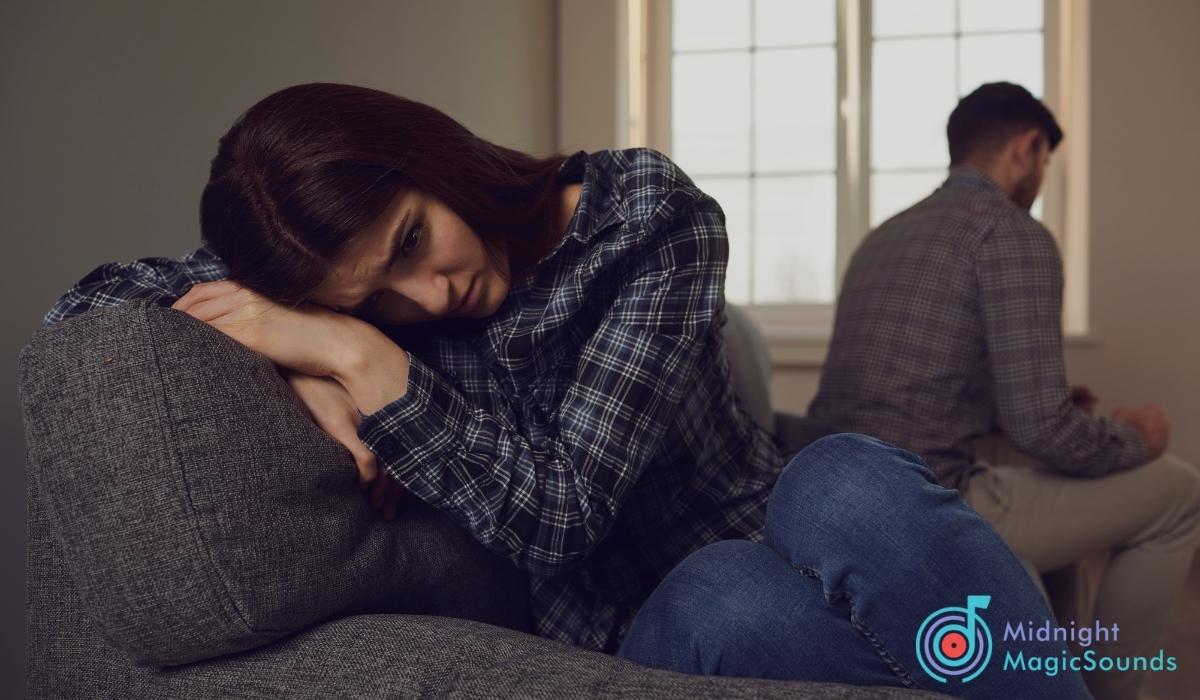 Songs about not wanting to fall in love can be what you need when you are heartbroken. They can offer comfort and companionship to your aching heart in that difficult situation you are facing.

I mostly listen to songs in this category because they assist me in letting go of the hurt from holding on to a one-sided relationship.

Listening to the songs I compiled can make you feel less alone, as a majority of the artists have composed songs relatable to the situation you are going through. That sense of connection with someone else can and listening to good music can assist in lifting the pain you endured because of love.

Songs About Not Wanting To Fall In Love

If you are experiencing any painful situation out of the fallout from your lover, here are some songs I enjoy listening to that can comfort you.

1. Not a Bad Thing – Justin Timberlake

Justin Timberlake wrote this piece about trying to convince the woman he is interested in but is not ready to fall in love with him. It tells the story of a person who has been constantly disappointed through regularly broken promises.

He promises to do better and be different as he sticks through thick and thin. The song was released in 2013 on his album titled 20/20 Experience.

Wicked Game by Chris Isaak perfectly captures the phrase, “Love knows no Logic.” If you have ever connected with someone romantically, but your mind tries to warn you, it can end in tragic heartache.

This piece by Isaak is him not trying to commit because he knows that the relationship won’t end up well, but nonetheless not listening to his head and committing.

Seeking out musical success after being a child star at Nickelodeon is not easy, as only a few artists, such as Miley Cyrus, have managed to do so.

Ariana worked so hard and managed to release six studio albums so far. Safety Net is a duet that talks about her unwillingness to risk it all in the relationship she is getting into.

Hanks William’s simple lyrical delivery and voice can convey life experiences and emotions in any song. Only a person with a broken heart can compose multiple songs about not wanting to fall in love.

6. Too Good At Goodbyes – Sam Smith

After being in multiple relationships, Sam Smith had constant heartbreaks from different lovers. With multiple heartbreaks and broken hearts, he got the inspiration to write “Too Good At Goodbyes.”

The song is a message to himself that he has become tougher and, in a way, protecting himself. In a way, he is closing his heart to love again; if he does, he might not get hurt when it turns sour.

This Piece from Tom Waits is one of the timeless songs that can never lose its charm. It is a romantic song for those who were unexpectedly swept by emotions of love towards someone.

The song is a narration by Tom telling a woman he met in a bar that he is mesmerized by and hopes that he will not fall for her. The emotions from every line of the song will hold on to your heart and not let go.

8. You Made Me Love You – Patsy Cline

It is crazy how someone can influence your emotions and make you feel things you had no intention of feeling. Patsy Cline expresses this emotion so well through this piece that it contains relaxing, smooth, and slow melodies.

The song can make you think about all the instances where your significant others’ deeds made you fall in love unwillingly.

Recommended: 21 Most Popular Songs About Obsession.

9. Ever Fallen In Love – Pete Yorn

I am really interested in the memory that accompanies this piece compared to other songs about not wanting to fall in love. This memorable track is part of the soundtrack of one of my favorite movies, Shrek.

The song was originally composed by Pete Shelley, but the cover by Peter Yorn brought a new audience to the song, making it a global success.

Very few people are willing to admit their mistakes, especially by composing a song and painting themselves in a bad light.

Russ composed this song to confess and admit he is the reason that her ex-girlfriend is not willing to fall in love again, specifically because he cheated.

He admits his action may have impacted the feeling of trust of his former girlfriend towards anyone in her potential future relationships. Now she’s found an honest man but she has too much past trauma to commit.

“I Don’t Want Love” is one of the popular songs in The Antler’s fourth studio album, Burst Apart. The song by the band is clear through the title and lyrics.

The artist sends a message to whoever is interested in him romantically: he does not need an attachment. It seems that the setting the artist intends is a casual physical relationship and forthright with his intentions.

Having a partner who doesn’t want to commit fully to your relationship can be difficult as it may be a one-sided relationship.

Keyshia Cole composed this piece to convince her lover, who is unwilling to open up and commit to their relationship. If you have a partner who feels unprepared to commit, I recommend you share Trust by Keyshia.

Out of numerous songs about not wanting to fall in love, this is among the few rap pieces worth listening to. 2Pac really knew how to finesse women and music, and this song is evidence of the artist’s character.

In the song, the artist tells the woman he is with that he is not ready for a committed relationship because he loves his current lifestyle.

14. The Girl of My Best Friend – Elvis Presley

One of the worst feelings is a romantic attraction to your best friend’s partner. Love can be cruel as sometimes it can happen in unexpected places.

The legendary music icon Elvis Presley wrote one of the best songs about not wanting to fall in love to explain the predicament.

After being dumped by her boyfriend via a text message, Bebe Rexha kept her heart closed off to avoid falling in love again or getting into a committed relationship.

The kind of pain one can get from a broken heart from a person you love can heavily contribute to trust issues. Her sour experience inspired this piece and caused her to be uptight with matters concerning her heart.

Dua Lipa wrote this song with the help of her boyfriend, Anwar Hadid, to assist in opening herself more in their relationship.

In an interview, she says she has been reserved about getting into a relationship prior to the one she has with Hadid because of multiple instances of heartbreaks. The song shows the artist being still reserved and not easily wanting to fall deeper into love.

No band rocked harder in their prime compared to Aerosmith. This is evident in most of their songs, as they have hundreds of millions of views. Cryin’ by the band tells a story of a woman who fell in love, but her boyfriend ended their relationship.

It tells the narrative of how she overcame her heartbreak and is unwilling to get back with the man despite his efforts.

The Islands might not have gotten the break they needed to become a popular band compared to other well-known groups. Still, the quality of the music they composed deserves recognition nonetheless.

The song takes a lullaby tone that is quite catchy and melodic. The message from the band is about being exhausted from being in a lonely relationship and wanting no more to do with it.

Have you ever trusted someone and let yourself give all your love but ended up in heartbreak? Many of us, including Kehlani, have been in that situation, which often leads to long, painful nights.

The artist’s vocals are exceptional and relay the emotions of betrayal and the strength of overcoming pain effortlessly.

No pop star has faced some of the worst heartbreaking moments like Taylor Swift, with multiple heartbreak songs in her name. The song shows the artist’s anxiety about pursuing the desires of her heart out of fear of getting hurt again.

In an interview about the song, she admits to the worry of falling in love too quickly with a person she just met and wonders if it will affect the relationship’s future.

The last song in the list is from Bebe Rexha, as she addresses her feelings and emotions toward love. The song begins with the artist explaining to her partner how falling in love is similar to walking on fire.

This song can be a great dedication to a potential partner that isn’t ready just yet to fully commit.

When you go through a painful breakup, you will do anything to remedy the situation in order to heal from the experience.

Listening to songs about not wanting to fall in love has been my best escape, as they usually explain my current state of opinion romantically.

It helps me build up a wall and a shield around my heart of not wanting to feel any pain from love. The compilation I created consists of songs from multiple genres and eras that will comfort you through your difficult movement and entertain you.