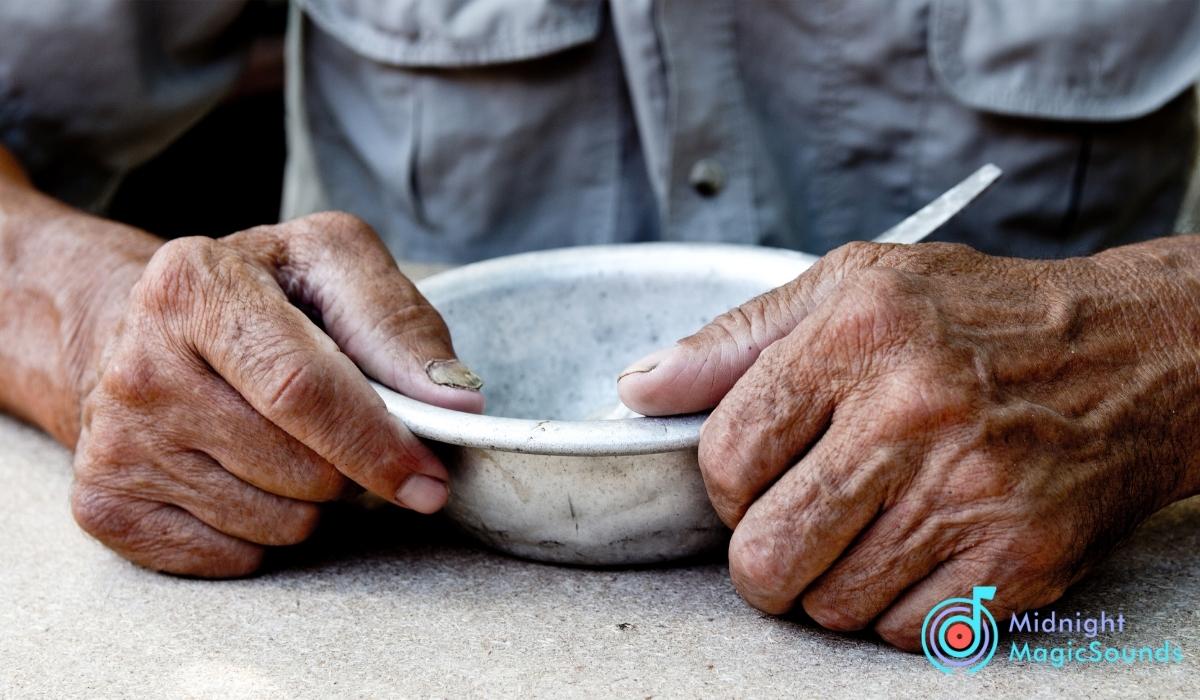 The global food crisis now affects over a billion people worldwide and has been a major cause of chronic health issues and malnutrition. Artists have long been making songs about hunger to create awareness and get world leaders and global citizens to make humane contributions to those less fortunate.

This has been a splendid initiative as it has created a positive impact, but not all artists make these songs illustrating the hunger for food. The songs about hunger by some artists can illustrate the need to connect with a higher power or connect with other people.

In most of these songs in the category, I found that the driving force in these composers is to display their emotion toward something they believe in to make a positive impact.

The compilation of songs I created for you to listen to covers different genres and artists of diverse backgrounds.

I found the following songs worthwhile to share with you as they cover different topics and might challenge you to think.

The first song in this category is a seventies classic by Van Dyke. “City On The Hill” talks about food being wasted while people are suffering from hunger.

The artist calls out classism and advocates a change of course by caring for those who are less fortunate. He also warns that there will be no peace as long as there are hungry mouths.

While establishing his charitable organization, Michael Jackson composed Heal The world to bring awareness of various global issues. It is one of the best songs about hunger and multiple social injustices affecting children globally.

By Establishing Heal the World Foundation, the artist spearheaded the efforts of helping millions globally, showing the direct impact a song can make. The song has hundreds of millions of streams and is still growing nearly three decades after its composition.

Freddy Mercury and Brian May of Queen wrote the song after watching the news of poverty in Africa, raising awareness of the effects of hunger globally.

Our next song on the list is from the famous country singer Johnny Cash. Here he’s talking about his experiences living alone after his girl had left him. He’s hungry, had a cold, and most importantly misses his partner.

“No Hunger” is a popular children’s song that teaches our children the importance of appreciating their food and not wasting it.

The song dives deep and teaches children they can take the initiative to help out hungry friends to end hunger. I found the song the best lesson our children need to learn from a young age.

The song is undoubtedly one of the best South African rap songs of all time that talks about real-world issues. The wordplay from Khuli Chana makes this song stand out from the rest of his songs.

It’s one of the few conscious rap songs that an artist talks passionately about the issues affecting his society. The lyrics are still relevant to this date, even over a decade after its release.

80’s music will always be unique due to its atmospheric sound and wordplay from the artist’s lyrics.

Though Hungry Eyes by Eric does not talk about lack of food, it points out the emotions one can experience and feel towards a lover. Soft rock became popular as they incorporated it into a classic film titled “Dirty Dancing.”

Don Mc Lean could compose songs that showed the flows we have as humans, making him gain a promising career over the years he was actively singing.

The song was released over 50 years ago and pointed out how those in power were polluting the world and had no mercy even to starving and crying children.

Listening to Bob Marley’s Songs, you realize he was not about easy living but dared to call out various world issues.

“Them Belly Full” is one of the most popular songs about hunger, as it criticizes the status quo. This artist was not afraid and he said the truth as it is.

Harry Styles is undoubtedly one of the best pop stars of our generation. The artist has composed multiple pieces gaining billions of streams, but some of his best work comes from his unreleased pieces, which are more profound and emotional than his mainstream pieces.

Hunger is a love song that talks about the artist’s now-gone relationship, and he addresses their passions from the past as a hunger they had for each other.

11. Far From the Arms of Hunger – Jackson Browne

Far From The Arms Of Hunger by Jackson is more of a prayer than a song. I can’t get enough of the artist every time I listen to his music, as they are deep, and anyone can connect with the lyrics.

There is no bigger world travesty than hunger, war, and chaos, and Jackson wants to be in a world far from warfare, hunger, and loneliness.

12. Hungry For Your Love – Van Morrison

Love is a strong emotion, and every artist has a way of expressing this deep emotion. Van Morrison’s assembly of lyrics combined with his unique voice makes this piece enjoyable and perfect for confessing to anyone you feel a romantic connection with.

In this song, the artist reflects on the holes in our psyche that we attempt to fill with addictions and obsessions. It’s evident that the hunger we experience in our lives can not only be food-based.

Florence wrote the song to make us feel less alone. The first verse “At seventeen I started to starve myself” highlights the artist’s eating disorder when she was a teenager.

Immensely few songs can contribute to spiritual awakening, and this piece from Nicole and David is one of them. The song found me while facing very tough challenges and became my refuge.

It talks about our hunger to embrace the Lord and follow his ways. Listening to this song strengthened my faith in God.

Too sad that not much has changed 50 years after the song’s release. Children are still born in the ghetto living in hunger, and grow up to become criminals.

Though we are facing similar challenges from half a century ago, I still appreciate Elvis’s highlighting issues affecting society with his string tone and smooth backing vocals that sound like angels.

This song is about an alcoholic husband that abuses his wife. His wife is then forced to take the kids and move out. Hunger in this song refers to the man’s abusive tendencies after he gets drunk.

My heart is broken every time I listen to this Michael Jackson piece knowing he passed away and various other artists took the initiative to record this piece as a message of solidarity with starving children in Africa.

Out of other songs about hunger, this is the only one with tens of popular artists making the best collaboration. It is an inspiring calling for us to join hands and stand in support of righteousness.

Besomora have established themselves in the metal genre as a force to reckon with over the years. For those that don’t know Besomora is an Australian death metal band. It focuses on the past and current affairs affecting multiple people worldwide, especially hunger.

19. Another Day In Paradise – Phil Collins

Sometimes we might be forgetful and lack appreciation for the things we take for granted. “Another Day in Paradise” shows our ignorance of the daily woes that homeless victims face, who lack shelter and food.

In this song, Phil Collins puts us in a frame of mind of appreciation and love for people from all walks of life. It also shows that most of us are closed off and lack compassion, something that should be changed.

Hailee is the definition of a true artist, from acting and getting an Oscar nomination to making music that tops multiple charts.

Starving is a love song that highlights their hunger for each other when they enter a new relationship. The deep emotional connection highlighted by the artists can help give you a new outlook on yourself and life.

The last song on our list is a piece from Of Monsters and Men that symbolizes a desire for something more. This song is about a suffocating relationship nearing its end, and the band still maintained their singing style, showing consistency through their music.

We all want to survive and thrive, and pursuing basic needs is the common denominator in our lives. While we go by our days and most of the time are comfortable that we can get a meal, many in this world lack the same and view it as a luxury.

Listening to songs about hunger has created a sense of awareness of this giant that we need to slay if we come together to help each other where we can. Other songs in the category focus on the passions and desires we feel and can only be symbolized and compared to hunger.