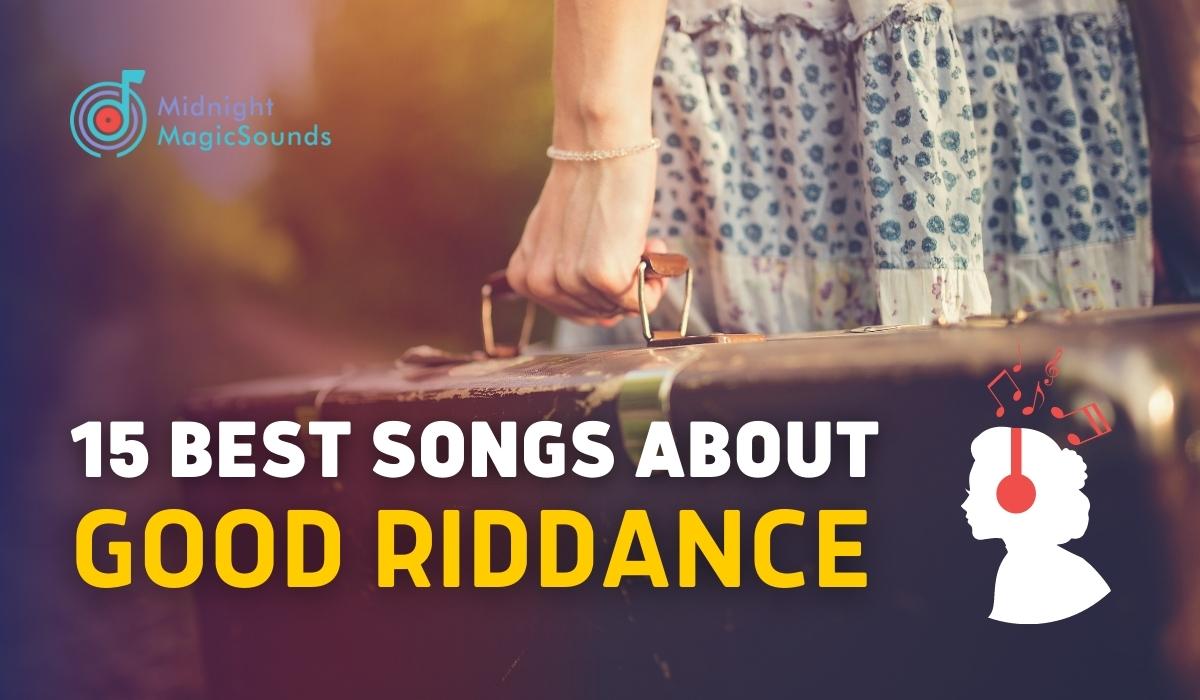 If you’re scratching your head right now thinking of how songs about good riddance are supposed to sound, just keep in mind the meaning of the phrase. It’s not hard to figure out, especially since ‘good riddance’ technically means it’s something, or someone, that you’re glad to get rid of and won’t miss.

You can imagine that a lot of the songs on this list are about subjects that the people singing them won’t be sorry to see go. Whether they’re situations, people that have wronged others, or just passing thoughts that a person doesn’t need, good riddance can express everything from anger to relief, and even defiance if one knows how to make it work.

The point of saying good riddance is kind of an odd way to say that a person doesn’t need whatever, or whoever, is leaving their life. It’s a blunt and gruff way of saying “I don’t need you” or “I’m better off”.

The way that people use this term varies in a lot of ways. It’s the type of phrase that’s versatile but also straight to the point when it’s spoken aloud. In a song, it’s a little more difficult to pick up on sometimes.

Billie Joe Armstrong thought about putting this song on the Dookie album that was Green Day’s big break into the mainstream. Unfortunately, it didn’t appear to fit with the album, since Dookie had a completely different feel to it.

But when the song did finally release it was well-received. The song apparently had to do with a break-up that Armstrong had experienced with his girlfriend a while before.

Pink has always had an edge to her music and this was no exception. Many people interpreted this song as a desire to move on from a bad relationship.

The feeling stuck, and the title only manages to strengthen this feeling since it’s delivered with enough force that it tells the fans that yes, she’s ready to move on. It’s the type of sentiment that many people can relate to.

3. You Can’t Always Get What You Want – The Rolling Stones

When it comes to songs about good riddance this is kind of a tough choice, but the fact is that the lyrics make it a little easier. The song is about the fact that no matter how much a person has, they’ll always want more.

But when you reach that point where it can be deduced that you’ve got what you need, it’s easy to say good riddance to the rest.

4. Without You – We Are the Fallen

A lot of songs that are about the idea of getting rid of something, or someone, have a bitter feel to them. That’s easy to hear in this song since the haunting tones of the lead singer are highly reminiscent of Amy Lee from Evanescence.

But the message is that after all the nonsense they’re moving on, and they’re better for it.

5. I Won’t Back Down – Tom Petty & The Heartbreakers

There’s a lot of defiance in this song and it might be that some folks wouldn’t peg it for a good riddance song.

But there is enough of a feeling within this track that makes one think that Tom is speaking of the need to lay down the idea of what the world is thinking and just push forward, thereby saying good riddance to doubt and uncertainty.

The level of defiance that leads to a giant mushroom-cloud feeling of anger and resentment in this song is powerful as hell. It’s also addictive since it’s an attempt to shrug off the toxic influences in life.

The video shows several instances in which people are being taken advantage of, and are ready to confront those that are causing them harm.

7. Shake It Off – Taylor Swift

The title of this song kind of says it all since Taylor Swift is known for love songs and the type of feelings they bring about. Trying to get rid of a bad experience or trying to forget someone is usually what songs about good riddance are all about.

Everyone has their own style, however, and Taylor’s is usually a little less edgy than most.

It’s kind of amazing how many different ways there are to express the need to move on from a bad relationship.

The fact that this was used during the end credits of a shark attack movie titled The Shallows is kind of interesting since the main character had to look back on her experience and learn to push forward while shrugging off the terrors she’d experienced.

This feels like something that might be a prelude to a good riddance story. At the very least, it’s saying good riddance to the need to kowtow to anyone and showing the defiance that’s needed to move forward.

Sometimes saying good riddance is a multi-step process. The song has a strong feel to it and is one of those that can definitely move a person to say the hell with it.

If you couldn’t tell, I like the defiant songs since they add a healthy bit of force to the tale. This was meant as a way to bid farewell to an old flame. Many saw it as Elton’s struggle with adversity, which was just fine.

It’s one of those songs about good riddance that leaves one feeling that it was truly a relief to be done with the individual.

The general feeling of this song is that not only is the narrator kind of separated from the rest of those he’s looking in on, but he’s wise to the person he’s talking about.

His lyrics speak of being able to see past the iniquities of the individual that has obviously earned his ire, well after the struggle that’s been felt no doubt.

This is another song where the title kind of makes it clear what’s going on, since the Chicks, formerly of Dixie, don’t really hold back.

But the story is kind of amusing until it gets kind of dark unless one likes dark humor. All in all, though, this song is kind of enjoyable in a few ways. It’s worth a listen.

This is kind of the opposite of good riddance but it felt right to put it on this list since it had to do with Julian Lennon. The son of John and Cynthia Lennon divorced when their son was young, and this was written to help him get through.

So perhaps it’s good riddance to the pain and uncertainty, which would make sense.

You can probably see where this idea is going since it’s not the type of song that can be easily mistaken for any other. Twisted Sister was a band that came out swinging back in the day.

Dee Snider knows how to pack a punch with his words, and it’s fair to say that good riddance is a byproduct of his style.

The Freshmen stands out as one of the darker good riddance tracks since it’s essentially an individual trying to shrug off blame for something tragic that happened. Or rather, it almost happened.

But the overall feeling of this song is that the narrator is making up excuses to wash his hands and say good riddance to a potentially disastrous experience.

One solid truth about any songs about good riddance is that they’re aimed at turning your back on a bad situation or a person you’d like to forget. That’s perfectly understandable since focusing too hard on a negative and trying to fix it can lead to an even worse situation.

But one thing that will always happen is that those ‘good riddance’ moments will come back to us now and then to remind us why moving forward is so important. 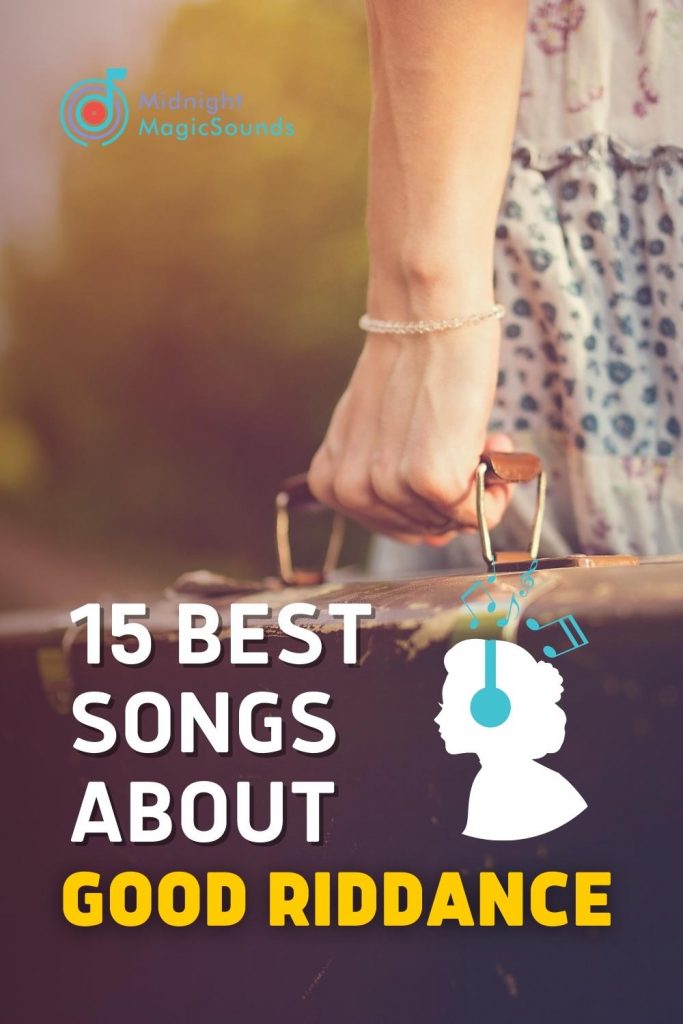