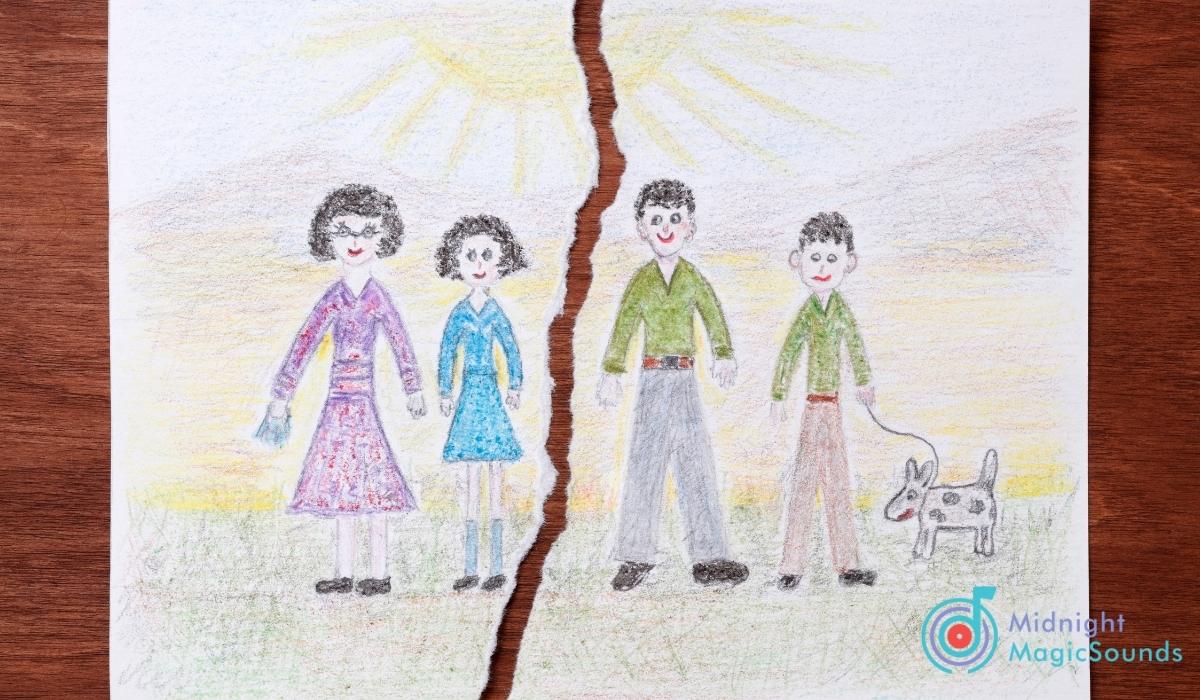 Listening to songs about divorced parents can be helpful when you are looking for ways to cope with the bad memories of a broken home.

The pain that comes from experiencing the separation process of your parents can be overwhelming to everyone, but the children suffer more.

If you have been in a household that ended up in your parents’ divorce, it can lead to traumatic psychological issues if you do not find a way to cope with the pain and confusion.

Divorce is more common than people can admit, and in many ways, it can be helpful to all parties to start a peaceful new beginning.

Having witnessed a few failed marriages, I’ve seen several ways divorced parents try to handle the situation. Music has been a centerpiece to many, as we all know you can heal your wounds with the right playlist.

In this article, I have compiled for you 21 popular songs that you can listen to about divorced parents to help you through tough times in your life.

If you are a country music fan, you already know that most of the artists in this genre are great storytellers in their songs.

“Love Triangle” tells an emotional story of a child caught in her parent’s divorce and has to go through the process of shared custody. She feels like she has to divide her love and affection towards both of her parents.

Papa Roach has released several tracks that are pretty memorable, and this track doesn’t disappoint, either. The song talks about the effects of a broken home and the lasting impact on the family.

The music video takes us through a journey of a happy home and things turning sour. We get to see how the effects are generational and will likely not end.

The consequences of divorce can not only put a toll on the children but also on the parents. The trips a parent will have to take to see their child can be stressful.

Wyatt Durrette understands the situation and why he composed one of the most popular songs about divorced parents where he highlights driving every Friday for hours to see his son.

To release the stress from witnessing her parents going through a divorce, P!nk wrote a poem about the day her father left their family.

She later made a song based on that poem known as “Family Portrait.” The song gives a firsthand account of the divorce through a child’s eyes.

Dolly Parton is a classical legend that penned numerous emotional pieces. The song “Starting Over” is one of her records that will outlive so many later songs as it stands out as a magnificent song.

I genuinely felt the power of this record through her voice and the simple, relaxed instrumental that supported every note.

Everyone has their means to cope with a burdening situation. Stephen Lynch took an approach different from traditional songs about divorced parents.

Though the topic of divorce is a serious topic, he decided to add a little humor to the song. The lyrics is quite funny but still talks about divorce and the destruction it has on families.

7. When You Love Someone – James TW

As an artist, James’s ability to tell stories through music is incredible. He never shies away from telling stories based on his personal experiences and struggles.

This is a song that he dedicated to a young boy he taught drums to. The boy’s parents were divorcing and James wanted to write a song to make the boy handle the bad news in a better way.

When it comes to making memorable records, very few bands can match Blink. This song is written from the point of view of a kid whose parents got divorced.

While most might not like to admit it, love is one of the most challenging parts of life and can be complicated to manage when building a family.

In the song “Older,” Sasha Sloan speaks on the damage separation and divorce have over time and how they affect each family member. Many Sasha fans will testify that this is one of the best songs about divorced parents.

Even in the 60s, when most of us thought it was rare and taboo for a marriage to break, this piece indicates they faced the same problems. The song is written from a her perspective.

Talking about negligence can be difficult when you are a child of divorce. “Piece by Piece” by Kelly is dedicated to her absentee father, who put her through pain by abandoning her while she was a child.

This song shows the importance of a parental figure, even if there is a separation. It is also an inspiring song as Kelly confirms that she would never let her children endure the pain she had to persevere.

This song is written by the band’s lead singer, Art Alexakis, from the perspective of his daughter, Anna. He was going through a divorce and wrote this song in an attempt to describe what his daughter went through.

Even though you’re a kid, you do understand a couple of things in your way, and the way kids interpret their parents’ divorce and deal with it is honestly sad to see.

Released over a decade ago, the song is still popular as it differs from regular pieces about divorced parents. This is a song that Eminem dedicated to his daughters.

After separating from his wife, Eminem reassures his daughters that everything will be alright and he will do his best to give them the best life.

14. Because of You – Kelly Clarkson

I miss the day when artists sang about their lives, not their lifestyles. Kelly Clarkson was one artist who had gone through a lot in her life after their parents’ divorce and faced neglect from her father.

That abandonment pain made her write some of her life’s most prevalent emotional and powerful pieces. Here she sings about trying not to make the same mistakes her parents did, and due to the trauma that she experienced, she’s scared to fall in love.

Divorces can really do a lot of harm to children psychologically. In this song, Tom recalls how his father frequently left the family unexpectedly when he was a boy.

He remembers feeling ill to his stomach as his father abandoned the house once more and his mother’s tears “coming through the walls.”

Every time the song comes on the radio, my eyes become teary, and I’m overwhelmed by emotions. The song hits differently when you are a child, and you are witnessing your parents’ marriage falling apart; there is nothing you can do.

The emotions from the artist when performing this duet are raw and relatable to all going through a similar situation.

There are too many emotions in this classic song over two decades old. In this song the mother is asking her ex-husband to return home on behalf of their children.

I can only imagine how much the children would have suffered after they found out their papa doesn’t want them anymore.

Children who are the primary victims of their parent’s separation have to endure a lot of pain and stress. One common stress is having to grow up too fast and being denied their deserved childhood.

Cassadee remembers her childhood years when everything was okay and then describes how her family gradually fell apart over the years, with her father eventually abandoning them after she became 11. In an attempt to escape reality she says she wishes she had never turned 11.

This song tells the story about a son being left and him not being able to learn much as a child. His parents divorced and didn’t bother explaining much to him, hence he didn’t know much.

The son was told that “One day he would understand everything”. However, that day never came and now the son is repeating his father’s mistake.

I appreciate the existence of Coldplay in this world due to their ability to create music relatable to what we are mainly going through.

They say songs are open to interpretation by the listeners, and in this piece, I relate to the loss of a father figure in a child’s life because of divorce. The song has millions of streams so far and is still growing in popularity.

The last song on the list talks about multiple issues after a divorce. The artist composed this emotional rap piece about the psychological abuse he endured after his father divorced his mother.

He talks about the struggle of being taken care of by a single mother while growing up and how he is overwhelmed with the experience.

The songs about divorced parents cover all the emotions and sensations generated by parents breaking up and their kids having to live without one or both parents.

Most of the song’s lyrics describe the negative emotions children have to endure as they are the most damaged from the divorce. These songs are realistic as the artists composed them from firsthand experience.