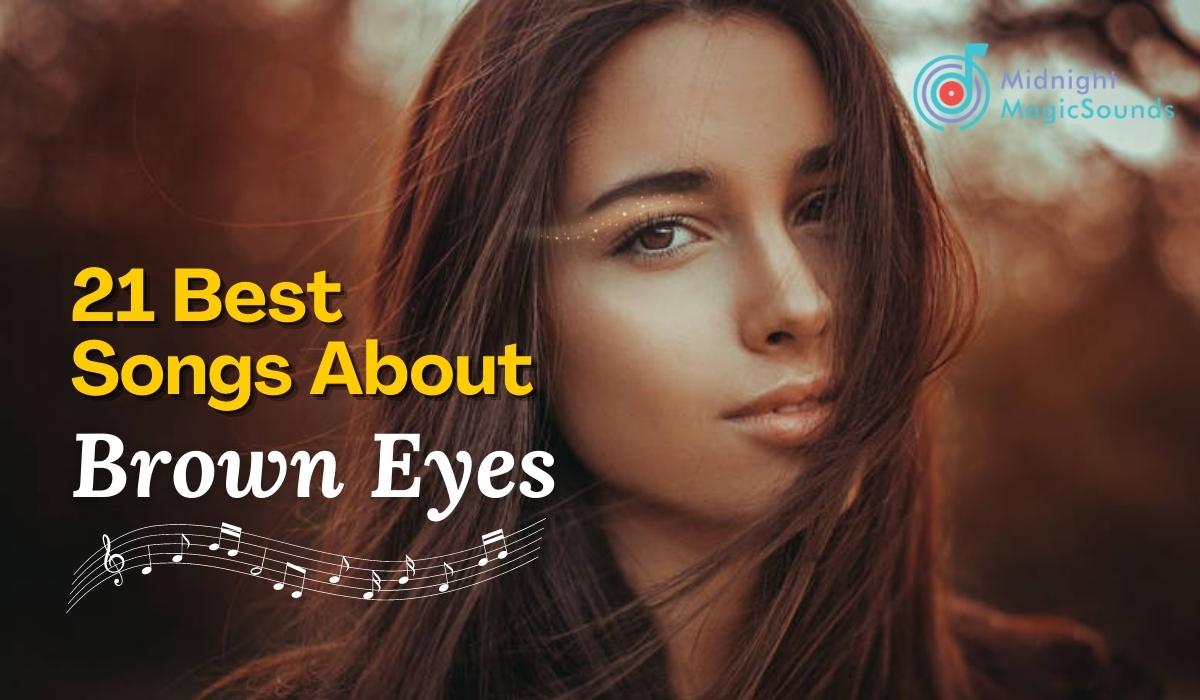 How many times have you been trying to find a song for your crush or a friend, just to have to give up since there are no songs about brown eyes?

I know it becomes frustrating with every other artist saying blue eyes this and green eyes that. Still, there’s some really awesome music that celebrates different eye colors if you know where to look.

Luckily for you, I know where to look. And I found for you 21 amazing songs that fit the brief. I have something old and something new. There’s some R&B and some Country. I also dug up a couple of fantastic indie artists that you may want to pay attention to.

Sit back and enjoy the ride. I’ll show that for songs about eye colors, it’s all about the quality and not the quantity.

Probably the most famous song about brown eyes in the world. This Van Morrison classic has been featured in many movies, covered countless times (foreshadowing), and is bound to be part of your local radio station’s Summer playlist.

And if you want to cry a little, just check out the comment section whenever you find this song posted. Hundreds and hundreds of people sharing stories of spending beautiful years with their brown-eyed girls, some unfortunately having to say goodbye.

This song means so much to so many. I bet it will hook you as well.

I was afraid to get you too emotional too soon, so here’s some Ed Sheeran. This song is not only about brown eyes but also that whole dark and handsome look. And international spy rings, for some reason.

It’s a fun Summer song. Camila sounds like an angel. Cardi is funny as usual. It may not become a soundtrack to a romance of the century, but it may hint to that brown-eyed someone you have a thing for them.

It’s no secret that I’m not the biggest fan of contemporary mainstream music. This? I’m a huge fan.

What’s the best part of this song? The lyrics? The vocals? The beat? The atmosphere? It’s everything.

How easy it was to find an amazing song used to express your feeling for someone with blue eyes. Now all of those songs combined can’t compare to this track. It was truly the best part of 2018.

Thanks to TikTok for digging this one back up. Mint Condition is still touring and is definitely something you should check out if you ever get an opportunity.

No, scratch that. Create the opportunity. This music is worth going out of your way. This song is only the tip of the iceberg, and that baby goes down deep.

5. Kelly Clarkson – Behind These Hazel Eyes.

You didn’t know that Kelly could rock? Back in the naughties, many pop stars tried to make themselves seem cooler with boiled-down rock music in the background.

Though I have a few things to say about the arrangement, Kelly’s voice kills it here. And if you have a problem with a list of songs about brown eyes being infiltrated with another shade, oh well, I dare you to just sing a heartbeat song, Mr. Know-It-All.

Recommended: Top 15 Funny Mexican Songs that Will Cheer You Up.

A little more light pop before we explore other heavy hitters.

I honestly love how sweet and innocent everything here is. It’s very refreshing and reminiscent of the music that someone that age would make 20 or 30 years ago.

It’s a cute Summer tune and age-appropriate for teens and tweens.

The 90s and early naughties were the golden age of R&B, and Blackstreet was leading the pack. I honestly can’t think of another male group that could compete with them.

Brown Eyes is just a taste of what they could do. And it’s an amazing, sensual song made for a date with that someone special.

They refer to their love interest’s eye color in other tracks, but I will not tell you which. Trust me, you will enjoy exploring and trying to discover by yourself. Go listen to some Blackstreet.

I see a bit of a pattern developing here. A good chunk of the songs about brown eyes sound best with an acoustic guitar as an accompaniment.

Bedside Kites is a subgroup formed by the drummer and guitarist of an indie rock band Charles Irwin from Tampa, FL. They were an accidental discovery, but I would recommend them if you’re looking for a modern band with a distinct retro sound.

Another accidental discovery and what a gem it is. For those who are complaining there’s no real music these days anymore, meet Allen. He’s awesome.

It will take a few moments for your brain to wrap itself around what you’re experiencing, since you would never expect that voice and that music to come out of guys who look like that.

I love the uncluttered lyrics. I love there are no gimmicks. Just plain good music. Enjoy.

I’ll be honest, I’m not a Gaga fan. I had to be forced to look beyond the meat dress and Poker Face. I would have easily missed out on this track if I had to decide if I should pick up her albums based on the “hits”.

It would be a shame. Just listen to this. A bit of Elton John, a bit old show tunes, and a whole lot of awesome. Easily her best work, if you ask me.

Is anyone else missing Destiny’s Child?

Many people missed this track. It’s okay, after all, it’s on the same album as Survivor and Bootylicious. I am guilty of skipping a track ahead to the Story of Beauty.

I’m making amends today and having you listen to this track with me. And we should play it to celebrate that special person who knows how to tell us they love us with a single look.

Allow me to introduce you to one more indie wonder. Keeley Elise has earned herself a modest but devoted following by posting her music on YouTube. You’ll soon join their ranks.

And this song fits the brief today perfectly. “No one sings about brown eyes” and “Nothing beats the feeling of your brown eyes”. As you can see, completely on point.

We’re almost coming a full circle. It would make sense to add these three entries right after the first one, but I wanted to give you enough time to process your emotions after Van Morrison.

The Fleetwood Mac track does not come with as much emotional baggage, but it’s still a tune beloved by people for decades now. Have a listen if you’re in a chill mood.

There’s no band on this planet that did as much for traditional Irish music. The Pogues took all those classic tunes and made them not only cool, but a symbol of rebellion and general badasserie.

If you don’t like their rendition of this song, just look up a more traditional one. Trust me, there are few people that can compare to the Irish when it comes to singing about brown eyes.

I have to wrap up this section with a personal favorite. I never got to see Grateful Dead live, but I heard they had the best gigs ever.

I love the vibe, the music, and the story. It’s an amazing song that takes you on a journey in more ways than one.

A little warning, though. One song will lead to the next, and the next thing you know, you’re wearing tie-dye shirts and travel the states in a Volkswagen van.

I was certain I heard this song in a movie or on a TV show. It just has that sound that would fit some a rom-com montage. At some point, I became desperate and started looking into likely candidates in the reality TV cesspool.

Then it dawned on me, it was even worse. It was Facebook!

One year, every single brown-eyed lady I know discovered the song and shared it a million times. At least they let the song shine on its own and didn’t drown it in some annoying graphics.

Does it sound familiar? Yes, this is a cover of the Van Morrison’s iconic song, but it works perfectly.

At first, I was hesitant about including it, but after a while I warmed up to it. One could even say that this is proof of how much Irish immigrants helped shape American Country music. Or when Van Morrison makes a song, it’s awesome no matter what you try to do to it.

When I asked some Country folk to recommend songs about brown eyes, every single once almost shouted “John Hogan!” into my face.

One of them told me that when this song comes on at the local honkytonk, the young’uns leave the dance floor. Their parents and grandparents take over and go for a spin.

It’s just that kind of song. The kind that celebrates long-lasting relationships and happily-everafters. Well, as long as HEA means that you’re happy no matter what, as long as that special person is with you.

This song is not the best because it’s a tearjerker or it has a catchy beat. Nah, the waltz count will put you to sleep, while the lyrics will leave you scratching your head.

The awesomeness of this song lays in the last line. “I’ll never love blue eyes again.”

If someone with blue eyes broke your heart and you’ve switched teams, borrow Kitty’s words and sing it out loud.

Is there a more beautiful way to ask someone not to make you cry? When someone says they don’t make them like they used to, this is what they are talking about.

Crystal Gayle is one of a kind. All the sophistication of a Manhattan lounge, with the country soul and fairy-like charm. With that knee-length hair and, well, crystal blue eyes, she made everyone from Nashville to Naples fall in love with her voice.

Imagine an artist today coming out on live TV and saying, “Here’s our new song. We’ll record it sometimes next week.”

The label, the layers, and who knows who else will all lose their minds. But the 50s were a different time. A time when the divide between Country and Pop was almost nonexistent.

If you love listening to some Bobby Darin or Jerry Lee Lewis, you will love this track as well.

Well, that was a lot of songs with “brown eyes” in the title. At some point, I was tempted to look into non-English options, just to mix it up a bit.

However, I’m a little glad I didn’t. I ended up digging up a few songs and performers you may have forgotten about. I’m certain I’ve forgotten about a few and would not remember them unless I went digging for songs about brown eyes.

So, it’s official. Blue and green eyes can take a hike because browns have of the most interesting playlists ever put together. Allegedly.