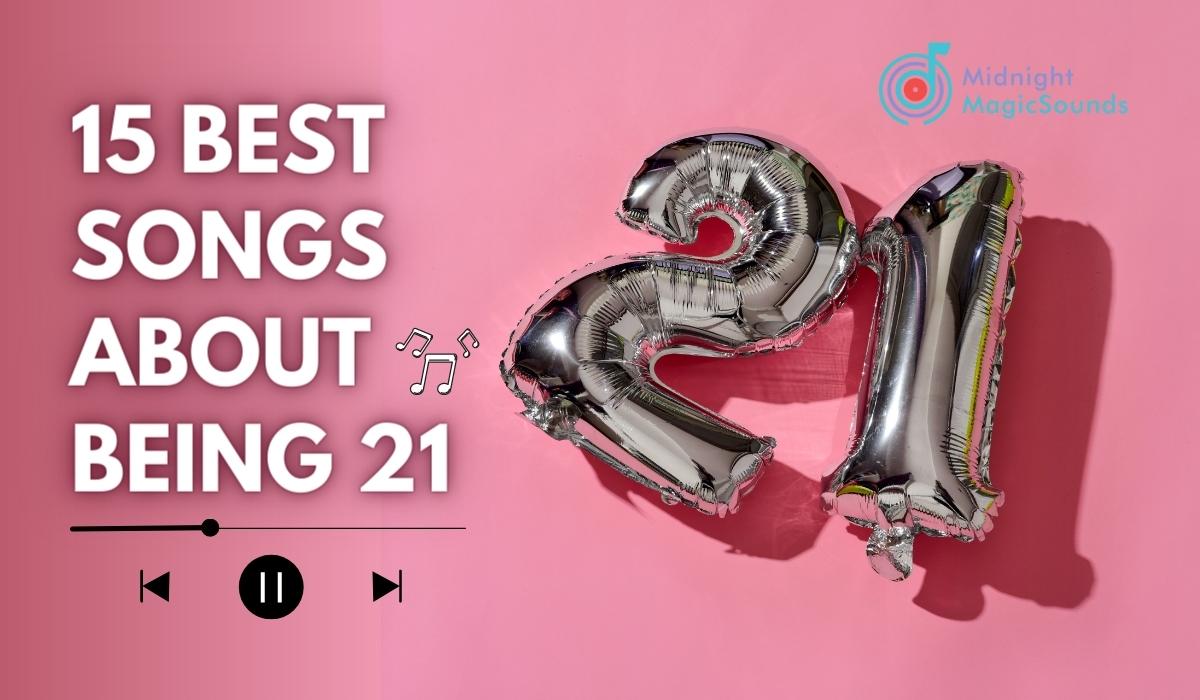 There are a few special ages that a lot of people can’t wait to turn, such as 13, 16, 18, and yes, 21. There’s a different reason to be excited about each age. Still, when it comes to one’s early 20s, it’s extra special since while you’re already a legal adult, it becomes possible to enjoy a legal drink inside a legal drinking establishment.

While that’s not as special to everyone, the 15 best songs about being 21 can liven up someone’s day when it comes to celebrating that special moment. But let’s be honest, being able to walk into a bar with your own ID is something special to a lot of people since it’s more about the drinking.

The privilege of being able to party with the adults finally and get in on the club scene is one of the best parts of growing up. There are plenty of songs that deal with partying. Still, as anyone should be able to imagine, many of the best songs that affect people in this age group have to do with being a part of the club scene and being able to drink without getting into serious trouble.

Here are 15 of the best songs that have to do with being 21. It’s your birthday, have some fun!

While this isn’t exactly a song about turning 21, it’s one of many people’s favorites since the beat and the rhythm of the track get people in the mood to make their way to the dance floor.

The song is more or less about 50 Cent’s rise to the top and a shout-out to several other rappers. But it’s a great way to enjoy yourself on your 21st birthday or just because you feel like bumping to a sick beat.

Like it or not, a lot of songs that are celebrated by 21-year-olds have to do with drinking and/or being in a club. One doesn’t necessarily need to drink to have fun, but at the age of 21, it’s almost like a rite of passage to at least try it if that’s the desire since at this point it’s legal.

The great part of this song is that it’s essentially about cutting loose and enjoying a night out on the town, which is especially great after a long and trying week.

Thankfully, the meaning of this song is rather self-explanatory since LMFAO and Lil John bust onto the scene by stating that they’re there to pour some shots and have a good time.

And to be fair, when a person turns 21 and while they are in their early 20s, it’s easy to state that slamming back a few shots on the weekend or over the holidays is one of the things that many of us have done at least once or a dozen times.

Being old enough to do what you want doesn’t necessarily mean that you’re automatically going to be a part of the popular crowd, and in your early 20s, it’s fair to say that you might still be a bit awkward and need to find your own path.

At 21, a person is an adult, but likely, they don’t have everything figured out. So we raise a glass to being awkward since we’ve all been there.

There’s something about Katy Perry that tends to lose its appeal with the older crowds but appeals to those that grew up listening to her or think of her music as another bit of nostalgia that’s nice to listen to.

But as a song to dance to in the club or just enjoy at home while trying to figure out life, it’s nice as a bit of background.

This song is geared more toward the male psyche since the whole idea of becoming a man is something that many young men struggle with for a while, even when they hit the age of 18.

One has to remember that women mature far quicker than men on average, so this song would suit a 21-year-old quite easily. One interesting fact is that there’s a guitar riff in this song that’s used in Bad to the Bone by George Thorogood.

Songs that are about being 21 can be playful or make it appear that people have everything figured out, and don’t have to worry about planning for what lies ahead.

A lot of folks might not have worried too much about it even if they didn’t have everything figured out. But even if a person did or didn’t have their life figured out, the lyrics of this song make it clear that it’s important to have some idea.

Originally created by Merle Haggard, this song has a message that far too many people have had to accept as a common truth since doing things the hard way makes learning difficult and creates a long and drawn-out process.

But the point is that the hard way does make people evaluate what they have and what they can do with it.

Just about anything by the Eagles is worth listening to once, especially since it shows that a person has decent taste in music.

But as far as being 21 goes, it’s a great song with a lot of feelings that can open a person’s eyes to what they might want, and why they should, or shouldn’t pursue it.

The sad part about this song isn’t the fact that it’s about a young man that is infatuated with a young woman he hasn’t met yet. It’s the fact that Billy Bragg admitted to stealing this tune from Thin Lizzy.

But the poetic lean of it is something that could easily appeal to those that are in their early 20s and still idealistic enough about the world to fall into the feeling behind the words.

This is essentially about a young person signing up for the armed forces without knowing what they’re getting into, which is kind of sad to be fair, but provocative enough to be put out there as a way of saying ‘this could be you’.

Some folks might see it as a positive thing, and others might run the other way depending on their personal beliefs.

The metaphorical meaning of this song was to indicate that being on the road all the time for gigs is emotionally and physically draining.

But the literal meaning came from Browne was literally driving back and forth from one place to another with very little gas in his car.

Hey, a lot of us can relate these days, especially young folks that don’t have a lot of money to burn on fuel.

As a larger meaning, the title of this song is about transitions and pointing out that all things that come eventually go, much as one’s youth can do before we’re ready.

Let’s be honest, when we’re still young and can finally do everything we wanted when we were younger, it feels like it won’t ever end. Some songs about being 21 are kind of vague, but their meaning isn’t that difficult to pick up.

It’s kind of a sad story that inspired this song, but it’s likely to touch those in their early 20s as much as anyone else since it has to do with a young soldier being taken from his hometown and his love.

It’s an old story that has graced many songs, but it’s one that people still love to hear.

If you can think of your early 20s as a transitory phase then you’ll no doubt be on the right track when it comes to how your psychological growth keeps up with your physical development.

It was almost titled ‘Peter Pan Complex’, but RCA didn’t think that enough people would understand this reference. Songs that are about being 21 might make some folks feel as though they have a lot of growing yet to do, it happens.

The fun thing about picking the 15 best songs about being 21 is that at this age a lot of people are still figuring their lives out, and as a result, many songs can adequately, or accurately, describe what life is like at this age.

A person is fully-grown at this time, but they might also be trying their best to cling to vestiges of their youth, which hasn’t fled entirely in the case of many.

Once a person becomes an adult they’re expected to grow up a bit. But there’s nothing wrong with holding on to your youth, especially when it comes to your taste in music. 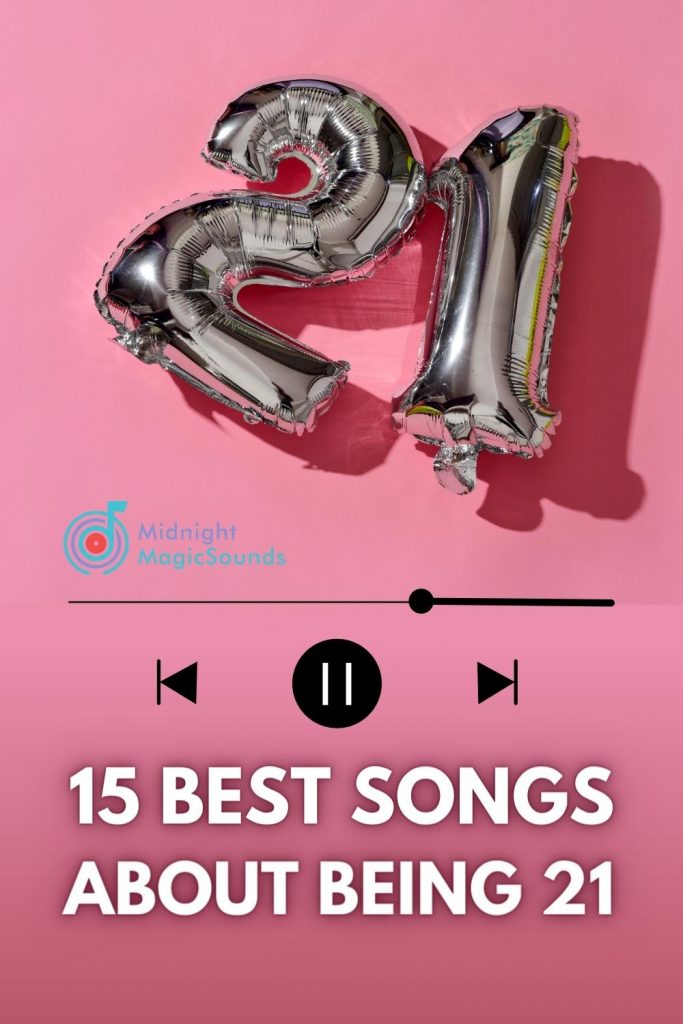