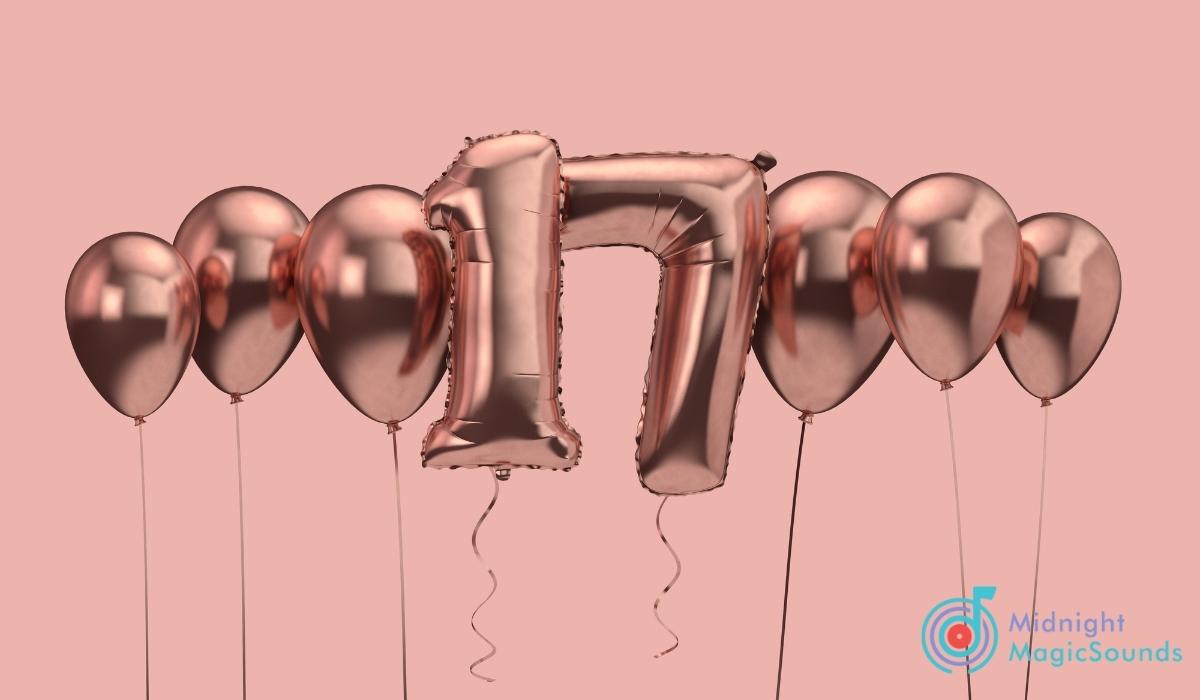 We all remember the confusing age of 17 when you are on the brink of adulthood but not quite yet, and these songs about being 17 capture that perfectly. Everything feels like it is going super fast yet super slow at the same time; you can’t wait to be an adult, but it seems to be just out of reach.

Everything feels confusing because of the surging hormones going through us when we feel alone and like no one gets us. Thanks to music, we can look back at those days and see the beauty in them.

We can almost always rely on songs to give us the exact feeling at the moment; artists have a God-given gift to deliver that with impeccable timing.

So today, we are going to look at a few songs about being 17 that can give us the comfort of accompanying any emotions we associate with the age of 17.

We will look at songs stretching different genres and eras to find a song to touch every emotion and memory we associate with those times.

I have gathered several songs about being 17 from different times and genres to entertain you.

Avril Lavigne made this song named 17 to reminisce about that perfect age of self-discovery and her experience with its complexity. She talks about how she and her boyfriend used to steal beers out of the trailer park, chilling on the rooftops and having a carefree time.

The song is a throwback to her adolescence and how she wishes to be back there with no care in the world. This is something I, and doubtless, many of us can relate to.

When making a list of the best songs about being 17, one has to have this classic masterpiece. This song is mostly popular for its minimalist lyrics, which make it more appealing with its touch of electronic music.

It shows the predatory nature of the fashion industry, which takes advantage of you when you are seventeen and then leaves you once you age.

The song is about teenage romance. The narrator is sixteen, falls in love with a seventeen-year-old boy, and doesn’t care if he is too young.

It is a classic teenage romance that will, without a doubt, get you on your feet getting lost in memories of being 17 again. It doesn’t have the most profound lyrics, but it is still great soul music.

Strawberry Wine is one of the best country music ever made, let alone a song about being 17. The song is about how a 17-year-old lost her innocence and likens it to the sweetness of strawberry wine.

It also talks about the emotional transition from being a girl to womanhood. It is also a great song that reminds me of what it was like being in love at such a young age and how love can be bittersweet, like strawberry wine.

Anthems for a Seventeen Year-Old Girl is a rock masterpiece about a woman reminiscing her teenage days as an innocent, sweet 17-year-old.

The song by Broken Social Scene was for their album, “You Forgot It In People,” released in 2002. It is about how a 17-year-old tackles adolescence while pursuing the things in her life as she transitions into adulthood.

Seventeen embraces the carefree attitude that can only be felt during the teenage years and is hard to adapt in adulthood. The song describes the complexity of being 17 and the beauty in it.

The singer talks about how you think you know everything at that age but don’t really know anything.

Dancing Queen is still popular to this day, showing what a great song it truly was. The song captures the experience of teenage life and the freedom and youthfulness of being 17.

It talks about how you dance and have the time of your life at this age. It is an upbeat song that can lift anyone’s mood with its brilliant lyrics and exciting beats.

This song is brilliant as it has a fresh perspective of a young person, as Alessia Cara released when she was just 19. It is about how teenagers want to grow up too fast and forget to appreciate where they are.

She talks about wishing she could stay 17 forever. The song will take you back to those beautiful times all over again. She ignored her parents’ advice at 17 and now wants to go back to that age.

Recommended: 21 Songs About Self-Harm That Can Help You Heal.

Carmen talks of a 17-year-old girl who is struggling with drinking problems. The song is also about the woman selling her body for money and generally living an unhealthy and dangerous lifestyle.

She talks about how all the boys and girls like Carmen and how easily you can be influenced when young. In the end, we find out that Carmen is only lying to herself.

Pink Sweat$ give us this beautiful song about unconditional love that lasts through the ages. The singer promises to always make their love feel 17 even when they are 92.

It is a great song to dedicate to your lover to show them that your love will always feel young and fresh, no matter how many years pass. The music video helps tell the love story and makes the song even better.

This is another of the songs about being 17 that captures the excitement of that age. Kid Rock talks about that time when he was between a boy and a man and the journey of self-discovery.

The song reminds us of the simpler times when being in love, making love, smoking, and drinking were all that mattered. Kid Rock perfectly knows how to describe the feeling of being 17 and easily takes you back to a teenager’s summer.

This is a classic alternative indie pop song by The Cars. Let’s Go shows the challenges of dating at the age of 17. The singer talks about the time he tried to ask out a 17-year-old girl and got turned down; he was heartbroken but didn’t give up on love.

He talks about how he doesn’t want anyone else even though the girl is not interested. It takes me back to my first heartbreak at that age and how I thought it was the end of my life. It is an excellent reminiscent piece that represents the feelings we all felt at that age.

This song is arguably the saddest among the songs about being 17 as it is about a girl who will always be 17 as she took her own life at that age.

The song tackles the sad topic of loss and suicide and is perfect for listening to when you are missing someone you lost. The 17-year-old girl took her own life because she kept too much bottled in as she didn’t know how to express herself.

The song is a classic song from 1965 with a gun violence theme. The narrator talks about the nature of gun violence and how it affected him and his friends at the tender age of 17.

He says he lost a lot of friends to the avoidable nature of gun violence. Apart from it being entertaining, the song also shines a light on the controversial nature of guns.

This is a song about the confusing nature of being 17 and how the narrator made mistakes at that age. He looks back and is convinced he won’t change a thing if given a chance.

It represents the bold attitude we have when 17 and how it has shaped us into who we are today.

Recommended: 21 Inappropriate Songs Not to be Played at a Funeral.

Edge of seventeen by Stevie Nicks is an award-winning 80s pop-rock anthem. It takes different approaches to talk about the complexity of the tender age.

In this, Nicks talks about the grief of the loss of her uncle and the assassination of John Lennon. The grief and trauma behind the song is a touching message for those who lost their loved ones at a tender age.

17 by Kings Of Leon is a song about the teenage romance of the narrator, who falls in love with a 17-year-old and goes through all the trials and tribulations associated with teenage life.

The song takes us back to the times when we started to understand the difficulties of loving someone.

Seventeen by Winger is a classic. The song is about love at first sight and the stubbornness of being 17. He falls in love with a 17-year-old girl while he’s much older.

The singer ignores his father’s advice that they are too young for love, and the girl insists on it too – a classic song about the rebellious nature and thrill of being in love when 17.

This rock indie masterpiece takes you back to your teenage years. The song is about the ambitious and dreamy times when we were young, and the world was there for the taking.

It felt like we could do anything as our potential was out of this world. The song encourages us to take chances by the neck and not let go, as it is up to us to make our dreams happen.

Love stories have a way of speaking to all of us, especially when young, which is why most of the songs about being 17 talk about being in love. It is a song about two lovers who are barely seventeen trying to have sex for the first time in a car.

The innocent take on making love for the first time is captivating, bringing all the emotions experienced at that time to the surface. Although lengthy, the song is magical and is worth every second.

21. Seventeen -Marina and the Diamonds

Marina is a talented pop singer responsible for this beautiful song about the challenging aspect of going through teenage life. It is a song about her perspective turning 17, her complicated relationship with her dad, and how emotional it was.

It is an aggressive, powerful song that depicts the challenges of being 17. It is a raw take on the complicated emotions surrounding families. It can be a healing song for those who have strained relationships with their parents.

17 is a complex age, as we have all gone through or are going through at the moment. If you are experiencing it for the first time, just know you are not alone, we all have gone through it, and you will make it out stronger.

These songs about being 17 can help anyone going through it or anyone who wishes to return to that magical age where you are on the verge of adulthood but not quite there yet.