In this part of any article, you probably expect to read how soundbars are a lot older than you think. Then I’m supposed to tell you about this weird gadget invented (or stolen) by Eddison way back when and it looked like several tin cans taped together.

Well, sorry to disappoint. Soundbars go only back to the late 90s, about a year after Sharp and Sony introduced the first flat-screen TVs. They were made to compensate for the dingy speakers that came with those early models.

Fast forward a quarter of a century. Almost every major manufacturer makes soundbars, and some do it better than others. So, how does Samsung measure up?

In this Samsung HW q59ct review, we’ll take this soundbar on a test drive. We’ll look at what’s in the box, the setup process, and how it performs. I’ll also push it beyond the limits to see how it handles the needs of users one can’t consider average.

I don’t expect it to replace my fancy speakers, but at least I want it to improve my experience while on a laptop or watching TV. And for the price, it needs to be ten times better than something I can pick up for $20 on Amazon. 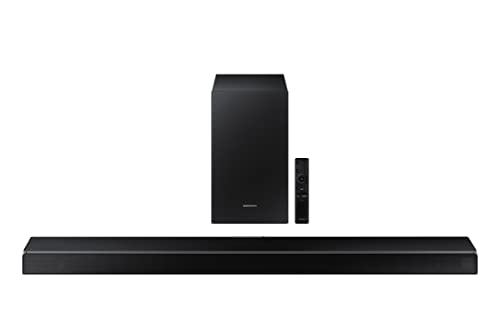 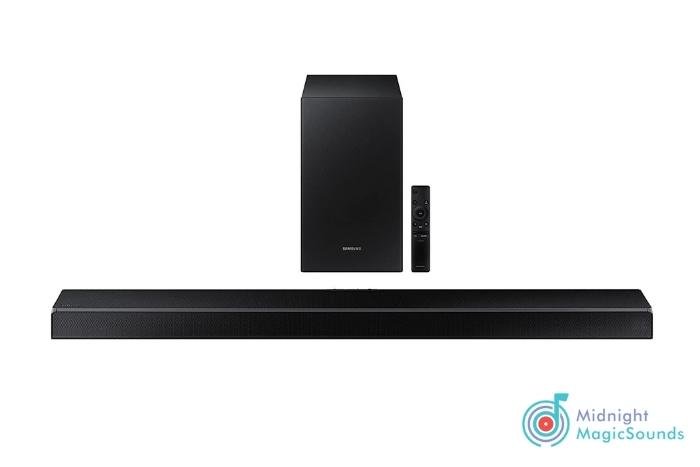 This is a 2-for-1 bar and subwoofer set. The style is sleek and minimalistic with an almost unperceivable Samsung logo. The bar is mostly plastic, with a metal grille covering the top and front. The subwoofer is made from melamine with a fabric front cover.

The bar measures just under 39 inches in length. It’s 2.3 inches tall and 4.2 inches deep. It should fit under any 56-inch TV with no issue. The subwoofer is about the size of an average PC subwoofer, but that doesn’t mean much. It connects to the bar wirelessly, so no need to worry about its placement.

In the box, you’ll also find two power cables with an AC adapter, an HDMI cable, mounting brackets and screws, a remote (with batteries!), and the manual.

This soundbar is made for Samsung TVs. It will not be difficult to hook it up to a TV from another brand, but you may find wires hanging differently.

There is no 3.5mm jack, so you cannot connect them to other devices (like laptops, desktops, and some projectors) without a converter or other add-ons. Or simply use Bluetooth

As a perk, if you are connecting this soundbar to a Samsung TV, you can use the same remote to control both.

Recommended: Sonos Arc vs Bose 700: Which Soundbar Is Worth Your Money? 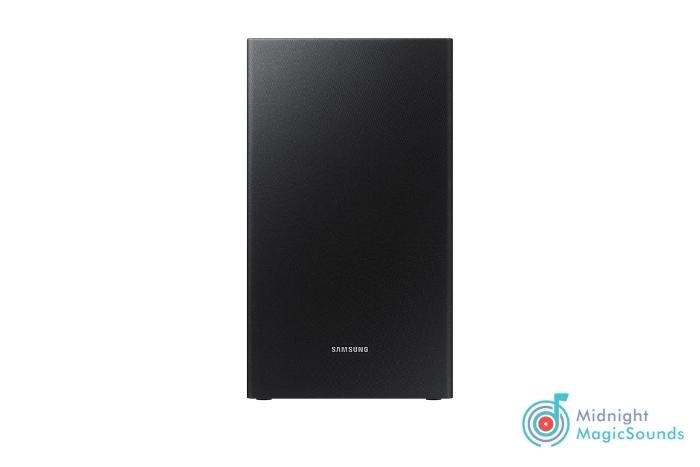 The bar feels very solid. The plastic is of good quality and everything seems well put together. The cables are also thick and properly secured to the connectors.

I got a bit rough with them to see how likely are they to show the signs of wear and tear early. Neither the soundbar nor the subwoofer seem completely scratch and impact-proof, but as long as you don’t drop them or cut them with a knife, they should look as good as new for a long time.

How easy it is to set up the Samsung HW Q59CT?

For the most, it’s effortless. It’s more or less as easy as pairing the bar and subwoofer and connecting a few cables to the TV. As long as you have clear access, it should not be a problem at all.

The cables are properly marked, and the instructions are clear. Your task will be completed in minutes.

I tested this by borrowing a 7-year-old and leaving them to it. They could figure it out without paying too much attention to the manual. I thought of getting a 70-year-old to do the same but thought it better not to have them bend and kneel for your sake.

I mentioned I had a certain expectation for sound quality at this price point. My standards were mostly met. I have a few things to address, but they don’t seem like huge issues to me.

Does the Samsung HW Q95CT sound great? Yes. The only place it struggles is very low bass. That’s not unusual for soundbars in the first place, but I admit I was hoping for more.

That being said, in Standard mode, the sound is fantastic. Most users will immensely enjoy movies and music with no issues. I even prefer it to DTS Virtual:X, which sounds too plastic for my taste.

The audio is clear and realistic. Things can get loud enough for you to enjoy a proper cinematic experience without sounding scratchy or creaky. To describe it in terms some people will understand: this soundbar passed both the Michael Bay and anime tests.

You can play with the EQ on your TV or another device to get more bass, but you’ll be disappointed if that’s your priority.

The Gaming mode is not too bad, but I’m coming from a standpoint of someone who uses headphones for gaming. It’s still better than several regular speakers and soundbars in the same price range, and will allow you to pick up on certain sounds (i.e. footsteps) you would lose otherwise.

There’s not much difference in the quality based on the device. I got great audio playing musing from a phone and a tablet. There was a slight difference based on the format, but that was all on the file quality and I have the same issues when using other speakers and headphones. 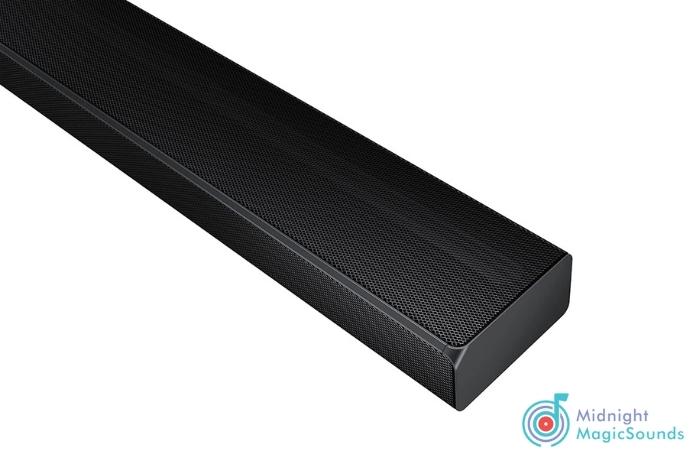 It’s time for Mayhem. No, not chaos, but a Norwegian Black Metal band from the 90s. And none of that “sell-out” remastered stuff that doesn’t sound like broken vacuums and jackhammers breaking asphalt. I’m not as big of a fan as I may sound, but I love them for testing audio equipment.

In short, it’s more than a challenge getting that stuff not to sound like your speakers are breaking when at full volume. And Samsung doesn’t rise to this challenge. Even with some EQ manipulation, it’s still not good. It’s not like it will make me like this model less, but it’s something I expected at this price point.

Next, I took it outside. Soundbars are usually not meant for outdoor use, so I expected little. However, this was marginally better than some soundbars from the same price range, so I’ll give it a pass.

Finally, I’ve put a pair of mittens on to test usability in case of disability or dexterity issues. I’ll fail the remote here. It’s not terrible, but it’s not the best either. Any problem with mobility in fingers may make it hard to hit all the buttons. Samsung, do better.

Is Samsung good for a soundbar?

It’s good, but there’s better from companies that specialize in audio equipment.

Their soundbars have an edge if you’re pairing them with Samsung TVs, but not as much when you’re comparing them to a product from a company that makes nothing but high-quality speakers.

They are slightly better when compared to direct competition, but that’s another show.

How do I connect my Samsung HW Q59CT soundbar to my TV?

If you’ve picked up the SWA-8500S speakers as well, you can connect them to the soundbar via included cables.

Finally, connect the HDMI cable to the soundbar and your TV.

Does Samsung HW Q59CT have WIFI?

Yes. This soundbar can connect to a TV through WiFi, as well as HDMI, Bluetooth TV, and other connection. You can also use Bluetooth to connect to your phone, MP3 player, tablet, laptop, gaming console, and any other device that supports Bluetooth.

Hopefully, this Samsung HW Q59CT review came in handy. Before sending you off, I want to talk for a second about other customer experiences.

I’ve seen a lot of positive reviews. Some people have mentioned they have been using and loving this soundbar for a decent while. Most of the complaints I’ve seen align with mine: the bass.

However, I never came into this expecting this to be a speaker I can crank up during parties or something. It would be nice not to have this complaint when you spend over $200, so I hope Samsung will re-address this issue with some future releases.

As of now, I give this bar 4.8 stars and would recommend it to anyone who prefers staying home and watching blockbusters on their TV.