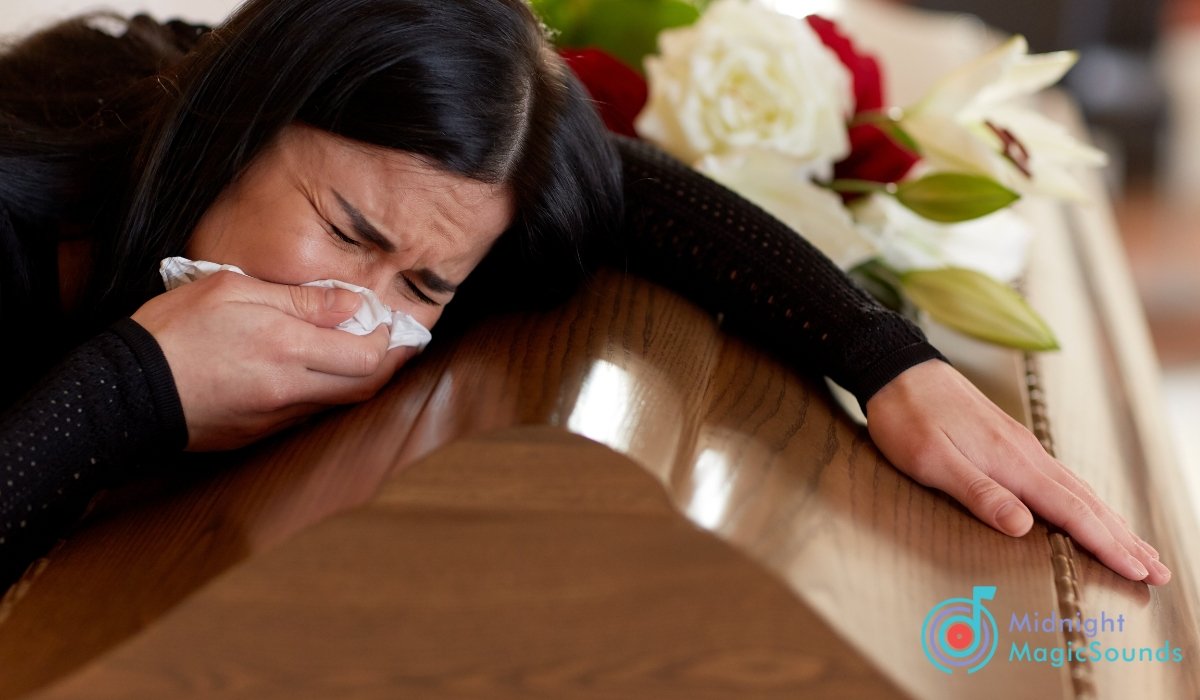 Trying to cope with the reality of your mother’s death can be difficult, as it often comes as a surprise or shock. I found listening to songs about losing your mom as the best way to live through the pain of my loss as they could communicate the emotions that I wasn’t able to say through words.

While some consider music mostly entertainment, I found these sad songs can help relate to grief. The compilation of songs in this list shows the composer’s relationship with their mothers and varies in genre and style.

Most of these pieces can be the funeral song you choose for your mother, as they are both very deep and intimate. I recommend you grab a tissue, as some of these songs can evoke emotions while listening to them.

21 Songs About Losing Your Mom

These are an array of different songs in the category, some of the tracks that I found worthy of sharing with you include:

To start the list is a song by one of the most popular artists in the world, Ed Sheeran. Supermarket flower is a somber song about a son who goes to pack his mother’s belongings after a funeral, and every object he touches has a deep memory attached to it.

While most of us thought it was about a mother’s death, Ed has revealed lately that it was dedicated to his grandmother.

“Mama Liked The Roses” is one of my favorite songs by Presley from his Christmas album. It is a beautiful and well-written song by the artist with melancholic instruments that are quite emotional.

The lyrics show Elvis’s adoration of his mother as it narrates how every Mother’s Day he puts her favorite roses on her grave.

Mamma Mia and its reboot have been some of my favorite musicals to listen to and watch, and this song is a major part of that. Every time I listen to this song, I have tears in my eyes.

It reminds me of how mothers are dedicated to their children, even when things seem to go wrong. Seeing Donna’s spirit during the song is the most touching part, reminding us that our loved ones are never too far from us.

This is one the saddest songs about losing your mom I have ever listened to, as it shows how tragic it is to lose a mother.

The song’s lyrics show the artist’s emotions towards missing his mother, and he acknowledges he is the man he is because of his mother. I discovered this song after losing someone close to me, giving me the strength to carry on.

5. Coat of Many Colors – Dolly Parton

Dolly Parton composed this piece from a personal perspective remembering her mother’s sacrifices. The song narrates the artist’s memory of her mother’s effort to provide whatever she wanted despite their financial status.

Though the song was released decades ago, it never ceases to get old as it paints a reality of what lengths our mothers went through to make everything seem okay.

The first time I heard the song after my loss, I cried like a baby and though time has passed, listening to this piece evokes bitter-sweet emotions in me.

The song became popular after it was featured in the soundtrack of a film titled “Fly Away Home,” which is about a child who has to go and live with her estranged father after her mother’s death.

Roses for Mama truly touched me when I first heard it. This song talks about a man going to a flower shop and seeing a little boy crying because he couldn’t buy his mother’s favorite roses.

The protagonist was touched by his story so he buys the boy the roses. Later that day he sees the little boy putting the flowers on his mother’s grave.

Let it be is an emotional song that came to Paul as a dream. After his mother passed, he dreamt of his mother telling him the words “Let it be.”

Paul McCartney wrote the song, inspired by his own mother’s death when he was 14. The song has been used globally to represent a host of different messages, and Paul says it is one of positivity.

The lyrics of the track are motivational as they urge us to keep moving forward no matter what. Losing a parent is quite difficult and can break the strongest person.

It sounds like it is sung from the point of view of a dying mother expressing her wish to her children to see the good things in life and have fun while living. Though the song was released in 2000, it continues to be a popular funeral tribute.

The song’s lyrics show Enya’s desire to find a way to reach her lost loved one. Out of multiple songs about losing your mom, this track’s composition relates to most people’s feelings when they lose their mothers.

Goodbye’s is an emotional ode composed by Celine to bid farewell to her mother. The lyrics show the composer showing appreciation for her mother’s effort to give birth and raise her.

She also realizes that the type of love she received from her mother is special and unconditional. Though her mother passed, we can see that Celine is comfortable that her mother’s love will live forever.

12. In The Arms Of An Angel – Sarah McLachlan

Sarah’s voice is what I imagine angels sing like, as it is amazing and beautiful. It is one of the few songs I blast on repeat, and I find myself emotional while I imagine my lost loved one in the arms of an angel.

The artist released the song in 1998 in her fourth studio album titled “Surfacing”, and it became one of her most popular songs of the year.

Losing a parent is a very difficult thing. It is even more difficult when you are not there to tell them goodbye. Radios in Heaven brings what most people feel to light and is one of the best sad songs about losing your mom.

The lyrics “I hope I’m just like you / I hope I turn out to be as good as you” make me tear up all the time.

Written by Diane Warren and voiced by Faith Hill is one of the most famous songs from “Pearl Harbor”, a successful box office film.

This emotional ballad became the artist’s signature song and contributed to the artist’s popularity. It is about remembering the loss of our loved ones and a reminder that though they are no longer physically close, they will always be in our hearts.

The opening line to Sissy’s Song, “Why did she have to go,” is a question that anyone who has lost a mother has asked themselves. None of us is ever ready to lose our mothers, no matter how much time we have with them.

But the song comforts us that she flew up to heaven and walks with Jesus while smiling and saying not to worry about her. This is a message we would all like to get from our mothers.

Recommended: 21 Best Songs to Dedicate to Your Brother.

This song is not exactly about mothers but covers what it’s like to lose someone. It shows the hope that we know our loved ones are watching over us and shining down on us. It also gives us the hope that we will eventually be together again.

17. Wind Beneath My Wings – Bette Midler

Bette doesn’t specify exactly who she is singing to, but you can take this song as one for songs about losing your mom. It talks about how sometimes our mothers can be in our shadows, but they are our heroes nevertheless.

After they pass, they are still there to support us, feeling as though they are the wind beneath our wings. It is a heartwarming song that will encourage you, knowing that your mother is still there for you.

Losing a person is heart-wrenching, especially if it happens unexpectedly. We sometimes wish to get just one more day to hold them close.

This song makes me pray to see my mother one last time, to spend one more day, one more sunset. But as the singer says, having this one more day will leave us wishing for yet another day. Such is the sorrow of losing someone you will not see again.

I am one of those people who believe our loved ones are still with us even after they are gone. Alabama captures my feelings exactly by talking about the angels among us.

They say they come to us in our darkest hours and teach and guide us throughout our lives. This comforts me by showing me my mother will always be there, watching over me.

Perhaps something that makes losing your mom even worse is being there while they pass on. Amber talks about seeing her mother hardly breathing.

The song continues talking about how every day feels like a monsoon because her mother is not there. That is something most of us can definitely relate to.

The days don’t seem as vibrant as they used to be. It shows how hard coping with grief can be, but it will get better.

21. Over The Rainbow – Judy Garland

To end the list is a popular song from The Wizard of Oz movie released in 1939. This timeless piece is often played at funerals and wakes to capture the mood and emotions that come with losing someone you dearly love, such as a mother.

Songs about losing your mom helped me through the grief I am going through by giving me strength and hope that we will meet again.

Many of these sad songs connect us to the songwriter who poured out their hearts to us. You can choose to play most of this song at your mom’s funeral, as they are a powerful medium to channel grief.

I hope the compilation I created represents the perfect songs to honor your mother’s life and legacy.