We all go through it at least once. You spend the entire school year sneaking in Kitkat for your friends and helping them with their geometry homework, only for them to “forget” to invite you when they go to the pool during the summer break.

Then you meet new people and go above and beyond by sharing your grandma’s super special hot chocolate, and what do they do? They destroy your snowman during the snowball fight!

People are sometimes just blah and truly bad friends. As you can see, sometimes it’s difficult to put it all into words. Great luck that we have wordsmiths who can do the job for us.

It’s fair to say that you shouldn’t cross a rapper (or Taylor Swift) if you want to stay anonymous. They will have a diss track ready and published before you process your falling out.

Rappers have been spilling the tea on fakers, users, and hangers-on for decades now. If you were looking for some beats to suit your mood right now, I got you. Sit tight and enjoy some of the best rap songs about fake friends.

A gentleman by the name of Mr. Screwball is having a civilized discussion with a gentleman that goes by Mr. Cormega. They have a few things to say about how jealousy affects friendships and how loyalty is important in human relationships.

Loyalty is just the first track of the album of the same name. There’s a lot more of the similar thing going on throughout this 2001 release. If you want to learn how this conflict develops, listen to the whole album.

The song opens with Mr. Fresh’s incredulity at the behavior of their so-called compatriots. He recalls their closeness that in some verses, resembles a type of friendships girls usually share (stating an observation, not judging), and mentions all the actions that we would expect in genuine friendship.

Mr. Fresh saw the change in his compatriots after money happened. His heart is broken, and he can’t believe they have all come to this even if he saw it happen to other people before.

Mr. Fresh wraps up his song with his sincere wishes that his once friend will experience enlightenment.

Mr. Slug wrote the lyrics for this song. We don’t know exactly who they are addressing, though it’s believed that it’s another artist they cooperated with previously.

Mr. Slug is not impressed with this individual’s opportunistic tendencies. It also seems that Mr. Slug is choosing to take the high road. He’s allowing his old friend the spoils, and he’s avoiding getting into unnecessary altercations.

However, this ex-friend is not getting the message and poking the proverbial bear. However, Mr. Slug is adamant to close this chapter of their life and move on after learning their lesson.

Mr. Rondo seems to still suffer the consequences of an old betrayal. I like how he compares his life to a red rose – a long thorny past with a luscious flower at the end. We love that for him.

Mr. Rondo tells us a little about the circumstances of his childhood and how they led him to form such strong bonds with people in his life. The same people led him onto a wrong path.

Mr. Rondo is a very poor judge of character. Or he judged one particular character badly and had to get it off his chest. It must be something like that for him to find himself twice on this list of rap songs about fake friends.

This time around, Mr. Rondo digs deep into his heart to see how betrayal affects his mental health and overall well-being.

He is still questioning the loyalty of the people in his past, especially because those people thought his that loyalty and genuine affection are priceless. Now all those events lead him to some questionable habits and life choices.

We must applaud Mr. Credle Senior for teaching the younger Mr. Credle some useful life lessons. He opens this song by admitting that his father is a lot wiser than he is. I guess he speaks the truth because Mr. Credle placed a lot of faith into undeserving individuals.

Luckily, Mr. Credle chooses to cut the negative elements out of his life. Those same elements were seeking to share their misery and bring other people down. We applaud Mr. Credle for choosing to extricate themselves and live their best life.

Mr. Ace here is not very fond of gossiping and derriere-kissing people. Unlike the previous entries, this song is not inspired by a specific event, but by a series of acts that Mr. Ace finds unpalatable.

Ms. Rah Digga also joins in to enrich the song with her unpleasant experiences. Overall, they agree that it’s better to have a small circle of friend one can rely on instead a large group of worthless people.

And a quick acknowledgement of the homage to Ms. Kellis in the middle of the song.

Time for a diss track where we know exactly who crossed our Mr. N9ne. I have the tea for you.

Way back when a label called JCor went bankrupt. As a result, they didn’t pay out some of their artists, including Mr. N9ne here and a gentleman that goes by Don Juan.

Mr. Juan blamed Mr. N9ne for this unfortunate happenstance and kept some of his music that was in his possession. As you may guess, Mr. N9ne was not too happy with this development, especially coming from someone they considered a friend.

This was the first round, and you can listen to both of the artists’ works to see what happened next.

Mr. N9ne makes another appearance, this time joining Mr. Rittz on this track.

I believe that the song is about what one would call emotional vampires. Mr. N9ne is addressing other issues this time around, while Mr. Rittz points out something that seems to plague most of the artists on this list.

Some of Mr. Rittz’s friends are mad at life for not going the way they imagined it will. There is a strong implication that they did nothing to change their circumstances.

Apparently, the song was prompted by yet another friend choosing to blame Mr. Rittz for the things happening in their life. And Mr. Rittz is tired of it all.

One should never meet one’s heroes. Let’s add to that, one should also never learn who they truly are.

Mr. Cole directly addresses his displeasure and disappointment in some of the most successful rappers today. It’s not about fake friends, but it displays directly what it feels like when we lose faith in people we look up to.

Mr. Cole even questions himself if he should behave the same way they do. After all, we are just like the people we associate with, so where do we draw a line?

I hope you enjoyed my interpretation of each song. Unfortunately, all these boys didn’t make it easy with their potty mouths.

Anyway, that’s not a wrap on the rap songs about fake friends. As you can see, I’ve skipped better known entries by more mainstream artists like Drake or Kanye West. Some awesome moments also popped up in freestyle sessions as well.

And that’s not all. My research got me all across the world, and listening to rap in almost any language. My conclusion? Rappers seem to be terrible taste in people.

If you can sympathize, at least now you have a few things you can passively-aggressively tweet at your frenemies. 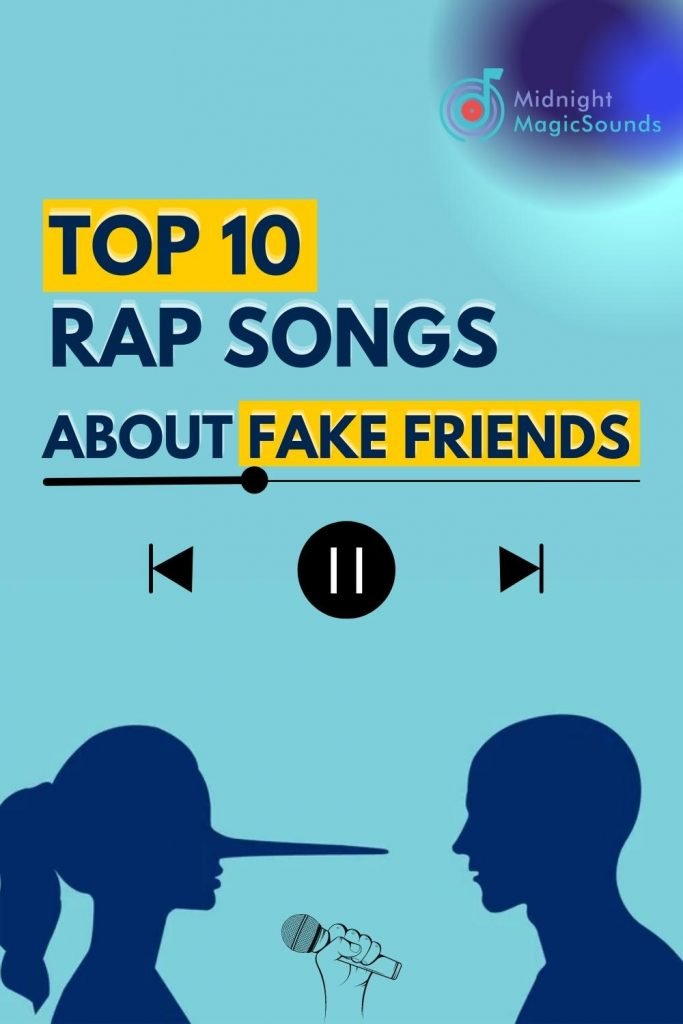