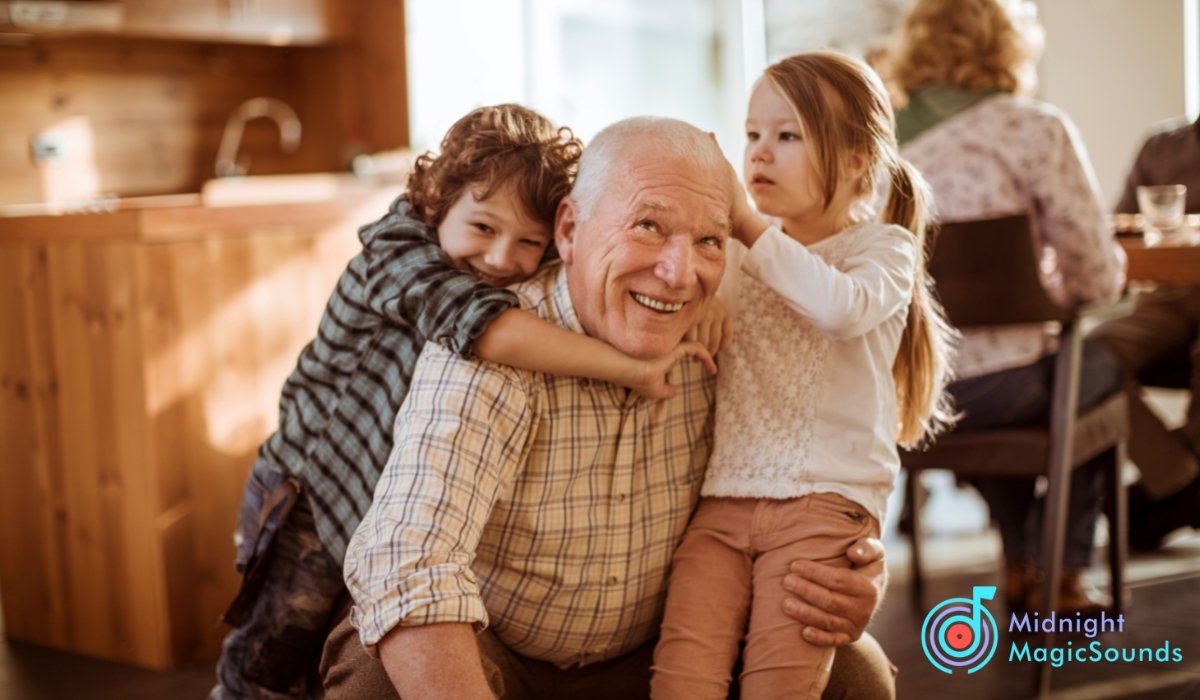 There is an overwhelming sense of joy when your child gets a child, and what is a better way to express the array of emotions that you might be going through than music? I have found that songs about grandchildren not only express grandparents’ love and happiness but also pass on a very important message and advice to the next generation.

There is no denying that grandparents and grandchildren are influential towards each other. The wisdom passed to the younger generation, and life lessons from a grandparent will forever shape a grandchild’s life.

Whether you are looking for the perfect song to dedicate to your grandchild or simply want a great tune you can share to create memories, this list has you covered.

The song comes from different genres and generations and primarily expresses how we feel about our grandchildren and the love we share with them.

21 Most Popular Songs About Grandchildren

Without further ado, enjoy some of the best songs about grandchildren that I compiled, and perhaps you may add a few to your playlist.

To start, this playlist is one of the most popular songs of the 1970s. The song was released in 1975 by Jerry Jeff Walker on his album named Ridin’ High.

The song tells a story of living life to the fullest and appreciating every moment you have with your friends. The song also narrates about not regretting mistakes made and telling your grandchildren all you experienced when old age comes.

2. I’ve Got a Thing About Seeing My Grandson Grow Old – Cat Stevens

Originally written by Cat Stevens, this is one of the best songs about grandchildren that can give an older person hope to live. The track discusses change that kicks in in old age, such as having health issues and more.

But because of the joy of having a grandchild, Cat Stevens will make it through every obstacle, making it an incredible example of how grandchildren can add life to someone and make them feel young again.

3. Child of My Child – Jennifer Gaffney

Child of my Child is one of my favorite songs in this list as it is a grandparent’s prayer for their grandchild. The track shows how special the bond between grandchildren and grandparents is, and Jenifer’s vocals can make you shed a tear or two while listening to the masterpiece.

If you are looking for songs to dedicate to your child’s child, then this piece shouldn’t be missing in your playlist.

Out of most of the songs about grandchildren, “Grandpa” tells a unique story from the rest. It is a reminder of respect for the good old times and will make you reflect on how times are changing.

The Judds are a remarkable team of mother and daughter, and in this duet, they show the purity of their voices and harmonies. The song went on to get covered with popular artists such as Dave Fenley, gaining millions of views and increasing the song’s popularity.

5. Grandpa Told Me So – Kenny Chesney

Kenny Chesney wrote this emotional ballad about his grandfather’s multiple teachings and advice in 1995. Due to its popularity, it reached number 23 on the Billboard Hot Country Chart.

The song carries a message of love and appreciation for grandparents. The song has wisdom, knowledge, and values that are passed from grandparents to grandchildren.

You’re Gonna Be is from a grandmother’s point of view after realizing that her daughter became pregnant at a young age. The song’s lyrics are a guide towards both her daughter and her grandchild that though they will be facing a lot of hardships, no matter what, she will always be there for them.

This is a perfect song to share with your child and grandchild who are scared to reassure them that you will always be by their side.

7. That’s What Grandpas Do – Gord Bamford

Gord Bamford wrote this heart-wrenching tribute to his grandfather. The song’s lyrics detail his interactions with his grandfather over the years. “Better love ’em while you can, man, ’cause that’s what grandpas do” is what Gord tells us.

Through the lyrics, one will quickly identify the massive influence that the grandfather had on his life. I hope you have a box of tissues while listening to the track, as you might get emotional.

Overwhelmed by the joy of experiencing grandmotherhood, an unknown composer composed this melodious track to express the happiness she has.

The song captures the feeling of happiness that the unknown grandmother is going through as she even incorporates the grandchild’s vocals in this piece. This is one of the most unique songs about grandchildren that is not from a popular or experienced composer.

Recommended: The 21 Best Songs About Tigers.

9. A Song For My Grandchildren – Papo Lucca

Every music composer has a unique way of expressing themselves through songs. This magnificent piece was composed by popular Puerto Rican musician Papo Lucca for his grandchildren.

The Latin jazz instrumental expresses his love and pride towards his grandchildren in ways no words can fully express. This ode will fill any grandparent’s heart with joy and happiness while listening to it.

Nancy Stewart has several tunes dedicated to entertaining infants, with popular songs such as “Little Peanut” she has dedicated her time to passing on a grandmother’s love to the younger generation.

Most of her songs dedicated to grandchildren can be streamed on premium platforms such as Amazon and Apple music on her album, “Songs for My Grandchildren.”

The Dreaming Fields is from the point of view of a granddaughter who remembers her great childhood at her grandparent’s farm.

If you ever grew up on your grandparent’s farm, you will be nostalgic for the beautiful images that the composer paints through her lyrics.

This piece was recorded in 2007 and is a great song to reconnect a grandchild to the memories they created while visiting or living with their grandparents.

This is an emotional song about the composer and his grandmother. Robbie Williams had a very close relationship with his grandparent, and it is evident as he tattooed her initial behind his ear to honor her.

The track is about his last moments with his grandmother and his belief that she is in heaven watching over him.

Easy Listening is a unique song about grandchildren as the composer set the theme of the song to be in the future. He understands that while he is growing older, he will have to try to cope with his grandchildren as things would have changed too much.

He talks about his struggle to understand the music his grandchildren are listening to, making it a relatable experience that would make any grandparent chuckle.

The first time I listened to the song, I was a little creeped out by the music video, but I have later come to appreciate its lyrical content.

The songs remind us to live life and enjoy it as life is only precious for the living. Dave’s passion and expression can be felt through his vocals, and only a few artists can attain this.

Grandma’s house is a hip-hop song that resonates with most grandchildren raised by their grandparents. The song talks about the lessons that the hip-hop composer learned while being raised by his grandmother.

It talks about how it was not easy being raised in a tough neighborhood, but he was helped nonetheless by his grandmother to be the man he is right now.

Recommended: The 21 Best Songs About Camping.

Based on his life, this song by Blake Sheldon talks about a special experience that very few grandchildren live to experience.

He sings about the lessons he got from his grandfather to use a gun which he later handed to him. From the narrative, I was captivated by the artist’s decision to pass the experience down to the next generation and not sell the gun despite its huge monetary value.

If you are a fan of the British classic band Queens, then ’39 will entertain you as it is among one of their best-composed songs. The song narrates a science fiction story about an astronaut traveling into a distant place and returning home many years later.

The astronaut reflects on the life he has lived and wishes to relieve the moments he missed.

This song was released on the band’s second studio album. Though it was received with a mixed reaction from the critic, the song’s popularity was unquestionable as it debuted at number 14 on the Billboard Top 200 Chart.

The song is about a conversation between a grandchild and a grandfather. The advice was for him not to be afraid of taking paths that may deem him lonely or very hard.

Although most of the songs in this compilation have meaning and words of wisdom, I’m My Own Grandpa takes a different route from the main theme.

It is a fun novelty song that talks about the singer’s distress after finding out he is his grandfather because of going into a marriage with a widow with an adult daughter that married his dad.

Like his father, Bob Marley, Ziggy Marley has created a name for himself in the music industry by releasing several hit pieces. His song Good Old Days concentrates on the words of advice given by his grandfather.

A look at the song’s lyrics, one will find that the advice given to Ziggy Marley is there is no past or future, but he should always live in the present.

The last song on this playlist is “Glorious” by Mackelmore. The song has managed to get over 265 million views on YouTube since its release in 2017.

The happy song features the composer’s grandmother in the music video about how both of them feel despite the large age gap.

Multiple songs about grandchildren cover an array of topics. Each song is special on its way, and most carry a love message.

Whether you want to share that love or impart wisdom to your grandchild and the only language they understand is music, then the songs above will help you.

I hope you enjoyed the list, and if there is any other song that is not on the list but fits the category, feel free to add it in the comment section.