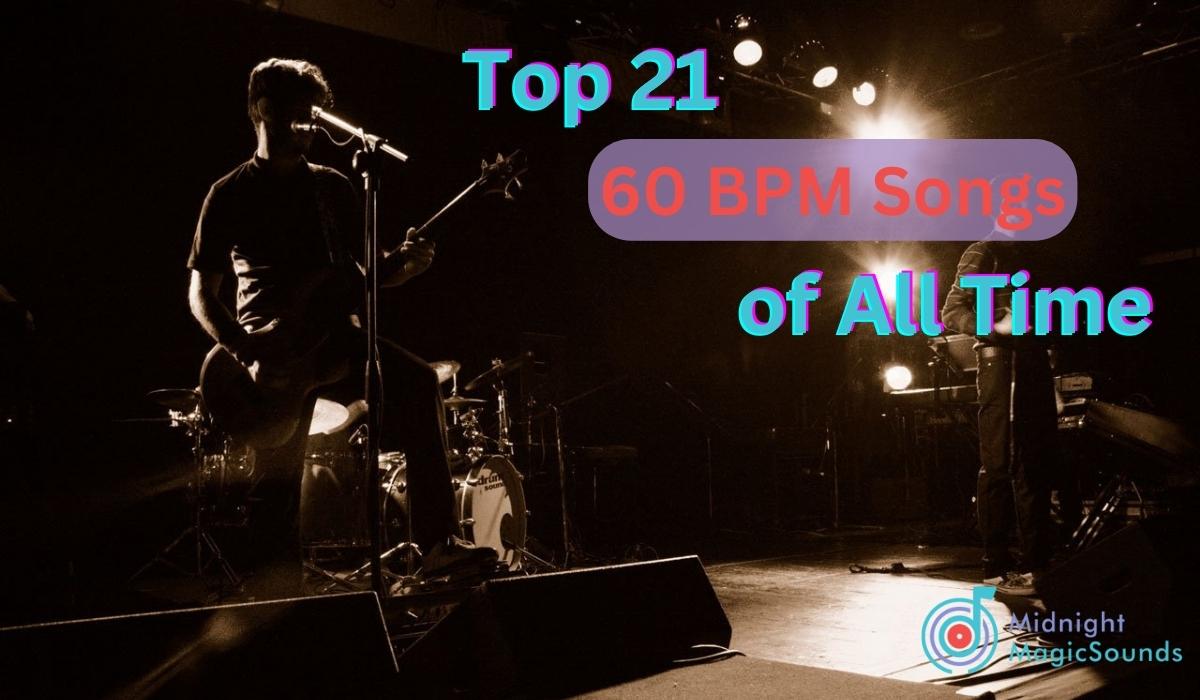 Music plays a significant role in our lives, and because of its importance, we incorporate it into many activities we undertake, such as exercise or even resting. I found listening to 60 bpm songs very relaxing and the best to unwind after a stressful day.

The tempo of the songs in this range can be either slow or very slow. Slower-tempo music can have a profound effect on both the physical and emotional well-being of the listener.

This is the opposite of a faster music tempo as they can make you stay more alert and concentrate better. Research confirms songs of around 60 beats per minute can cause the brain to synchronize with the beat, causing alpha brainwaves.

This brain relaxation can be compared to medication. If you have trouble catching sleep, let 60 bpm songs be the medication that helps you relax.

Multiple songs fall on this beat range. They span from genre to genre, and I found most of them entertaining and relaxing. They include:

Will I Am made a couple of popular songs; a majority of them are fast-paced party anthems. However, he also composed some of his best lyrics in this song that few of his fans are aware of.

In “Good Morning”, the artist put out an inspiring message to his listeners to live their lives to the fullest and focus on the bright aspects of it.

I can never get enough of this song since I stumbled upon it. It’s a one-of-a-kind song that is not only melodic but beautifully structured to keep you calm and relaxed.

The piece has gained mainstream TV success as they have incorporated it in various popular shows such as Gray’s Anatomy. This song was sampled by will.i.am in his song “Good Morning”, the first song on this list.

3. Other Side of the World – Luther Vandross

From Luther’s best album, “The Night I Fell In Love,” comes a song that definitely makes you emotional.

Listening to this classic song will make you wonder what happened to music as it evolved, as the current composers rarely make music that can connect to your soul.

The instrumental of the song is one of a kind as it is slow, romantic, soothing, and sensual, just as Luther intended.

Chris Brown’s music has evolved over the years from singing R&B to Hip-Hop. This shows the artist’s ability to be versatile and conquer any genre.

Out of multiple 60 bpm songs, this piece is among the few songs you can relax or put up on your feet and dance to. Though the audio was released over six years ago, the song still dominates airwaves up to this day.

As Justin was transitioning into making more mature music, he released this piece featuring R. Kelly in his ” Journals ” album. The harmonic sounds between the two artists are quite exceptional.

Here Justin is singing about his relationship with Selena, specifically about treating her the right way in bed and giving her something special.

According to the rapper, the title ‘LSD’ stands for ‘Love, Sex, Dreams.” A$AP Rocky can only capture this type of musical genius by making the listener experience an LSD journey.

The song has over 176 million views on YouTube alone and is the closest feeling you’ll get to taking LSD without it.

All by Myself might not be the most complex song to sing along to, but whoever has listened to the song has probably struggled to reach those high notes.

Celine Dion’s vocals are exceptional, and she makes the song so powerful. The song’s message is about the artist’s need not to be alone, which is relatable to anyone experiencing loneliness.

While others may call this masterpiece just a song, for me it is a message that most of us need to listen to. Few 60 bpm songs will put a full life lesson on a 6-minute song other than “Simple Man” by Lynyrd.

You do not have to experience traumatic life events to learn from the song. The composer teaches us to be content with life by living simply and being honest and caring.

I still remember being introduced to the song by my parents. This is a song that never ages, as the poetry of the lyrics is one of a kind. After looking deeper into the lyrics now I understand why it was recommended to me.

The song encourages the listeners to open themselves and not shy away from love. This is a song that I will share with anybody to accept love before it is too late.

“You’ll Never Know” was written by Harry Warren and Mack Gordon and has since won the Academy Award for Best Original Song in 1943. Michael Bublé did justice to the original composers by performing a moving rendition of the original song.

Michael’s musicianship is flawless, bringing an old song back to life for our generation to enjoy what seemed to be forgotten.

I believe Imagine Dragons are one of the best bands of our generation. Putting the band side by side with other popular mainstream bands, you will notice the group’s versatility and music quality is beyond many.

They have been my favorite band for years, and every song they compose has a deep meaning that teaches a great lesson to everyone.

You have probably heard of this song before in most religious settings. George Frederic Handel composed hallelujah in the 1700s, but it is still popular centuries later.

Out of all 60 bpm songs, this piece has stood the test of time as it is a message of resurrection and hope. I always imagine this is the type of music that angels sing in Heaven.

Sometimes we fall out of love with people we hoped would last a lifetime with them. That can be a hard experience having to go through the pain of heartbreak and move on.

Listening to music with a relatable message to your experience can help you raise your spirits. Vince Gill wrote this sad but beautiful song that you should listen to, especially when going through a rocky relationship.

After the success of Kenny Rogers’s song with a similar title, Gladys and Kenny Rogers collaborated to make this majestic song one of the best duets of that era.

The message from the artist is never to waste time, however busy we are fighting for what we love, and to tell those close to us that we love them. You never know when it will be too late for you.

There are multiple things to love about Open Our Eyes by Earth Wind and Fire. The song always takes me straight to the throne of God.

The melodic voice of Maurice will connect to you spiritually and might even make you acknowledge a higher power. This piece is not only a song but a prayer to the almighty.

16. Signs of the Times – Harry Styles

With over a billion views, it is evident that this piece stands out from other 60 bpm songs. “Sign of the Times” was released by Harry Styles over five years ago but remained my favorite from the artist despite having several other hits.

The song makes me think about how we put ourselves in misery when we shouldn’t. We deserve to live our lives to the fullest and enjoy every beautiful moment in life.

One of the most underrated artists in the hip-hop genre known for his lyrical bars is Hopsin. “I Wouldn’t Do That” and many other songs on his album marked his inception to mainstream hip-hop success.

The artist unleashed motions that might have been building up on this track. To understand, you have to listen to the whole album titled “No Shame.”

The song’s lyrics still give me Goosebumps every time I listen to it. I believe it’s a piece that ignites profound curiosity in the listener.

The theme of the song is thought to be related to the mental breakdown of the band’s former frontman Syd Barrett.

Is there an artist more equipped for the afterlife than Maurice? He truly is a master of meditation, as the combination of his voice and the lyrics from his songs show the profound definition of life.

It is hard to get musicians to compose quality 60 bpm songs that connect to the listener, Earth, Wind & Fire does this best.

While the most popular Jackson is undoubtedly Michael, this piece from the musical family was Jermaine’s time to shine. Many of us feel nostalgia when listening to this song. I certainly do and it also makes me feel positive.

The last song on our list is from the legendary group, The Beatles. Norwegian Wood tells a simple story of an affair that John Lennon was having at the time.

His affair didn’t go well, and some people think that “So I lit a fire / Isn’t it good, Norwegian wood?” means that John burned her house down. The song is almost 60 years old.

Listening to 60 bpm songs not only affects you psychologically and makes you calm down, but they can also synchronize with your heartbeat to enhance a deeper sense of relaxation.

An artist’s choice of using a fast tempo or a slower type will depend on the message he wants to convey to their audience.

I found that many of the songs in this category are classical pieces that are still popular today, so have a listen to the compilation I created and enjoy.