Soundbar systems will give you a more immersive listening and viewing experience in your home theater. However, many premium models come at a high cost.

But if you’re on a budget, the Onn Blast 5.1 will be a good deal. It’s reasonably priced and has decent sound production for all-around use. For this post, we will talk about an Onn 5.1 Soundbar System review to see if it’s the right match for you.

Unlike other soundbar brands, Onn isn’t as popular. After all, it’s exclusively sold in Walmart since it’s made by Durabrand, Walmart’s private label.

Interestingly, the warranty of Onn products is handled by Element Electronics based in America. Meanwhile, Onn devices, including their soundbars are manufactured mostly in Thailand and China.

It’s also important to note that every Onn device is manufactured and handled by different Durabrand partners. This means that their soundbars and TVs are likely manufactured by separate companies. But overall, they will all end up being sold in Walmart stores as budget-friendly options.

Overall, Onn soundbars are functional at best. But to know whether it’s the right choice for your home theater or streaming needs, we created a short review below. Read on and see if this brand is worth your money. 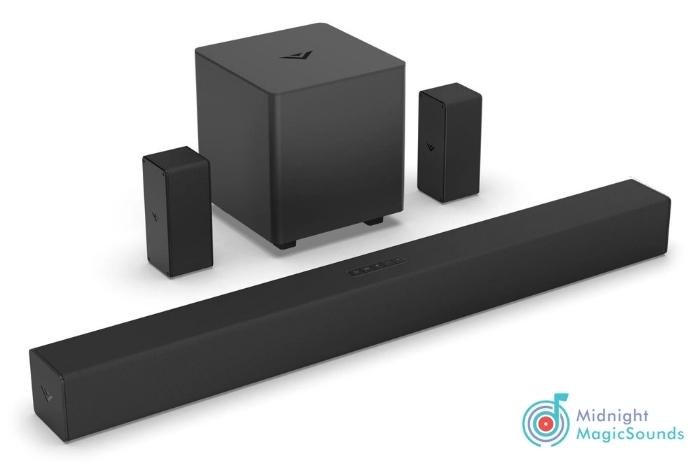 The Onn soundbar is a promising option, whether you’re fond of listening to music or streaming videos on your television. And if you’re wondering if it’s a good choice, you should read our review below.

The Onn 5.1 soundbar is available in 36” 37”, and 42” sizes. You can easily choose the sizes that match your home theater. Also, this gives you options to match your budget.

All three sizes are bundled with specific sound systems. For example, the Onn 42” 5.1.2 soundbar is paired with a wireless subwoofer. Meanwhile, the 36” version also comes with a subwoofer but with the addition of two satellite speakers.

Overall, you can pick the combination that works best for your intended use. 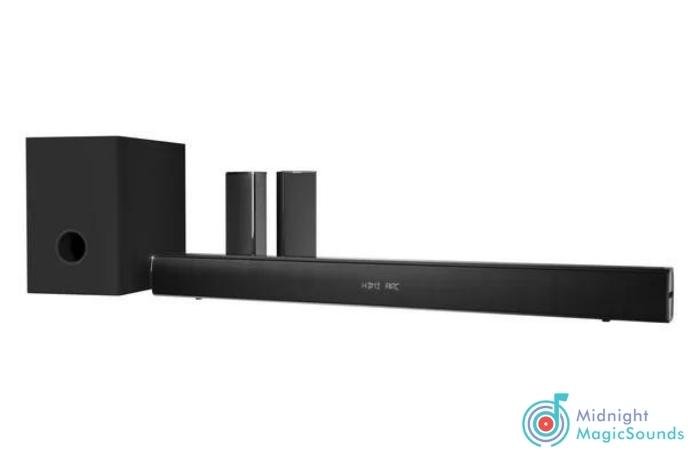 When it comes to sound quality, we can say that Onn has exceeded our expectations. Of course, it’s important to understand that we don’t put this soundbar to the same standard as we do with more expensive brands like Sony, Samsung, or Bang & Olufsen.

Overall, it does exceed the bare minimum we are expecting for such an affordable soundbar.

When it comes to specifics, the 37” Onn 5.1 soundbar has 700 watts of peak power. It’s also equipped with Dolby Digital Plus audio, which is the gold standard in the industry.

Inside, the soundbar has 7-channel speakers for optimal sound reproduction. It performs well both on the treble and bass parts. And to supplement the lower registers, this is bundled with a wireless subwoofer.

Overall, we’re impressed with the life-like nuance of this soundbar across media types. It’s a treat for movie nights, streaming music, and playing other audio files. You’ll surely love the richness and depth of the sound.

When it comes to build and design, the Onn 5.1 soundbar isn’t really a standout. It looks like any other soundbars in the market with black color and controls on top.

Although the aesthetics of this soundbar won’t blow your mind away, it’s just a small niggle if we factor in the sound quality.

Overall, it looks low-key when placed under your TV. It’s virtually invisible in the dark, except for the indicator lights on the control panel. Other than that, the design and build of the Onn soundbar are functional, which is everything you’d want from an audio device. 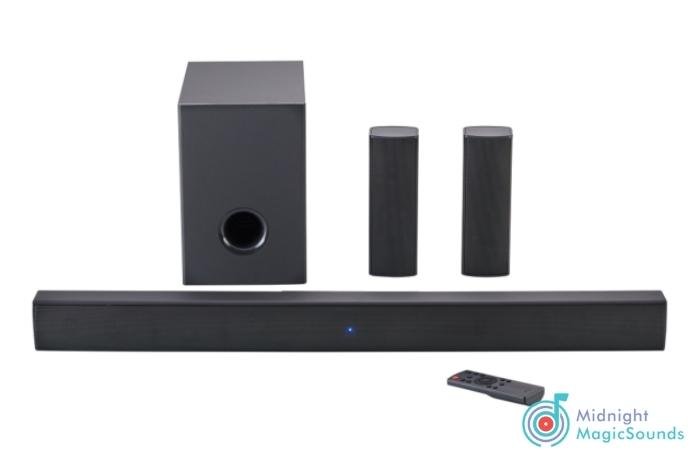 When it comes to controls, the Onn 5.1 soundbar got the essentials covered. Bluetooth connection is available on all models and sizes.

However, it’s important to know that the Apple AirPlay is only available on the 42” Onn 5.1.2 model. So if you want to enjoy that connectivity, you’d have to upgrade to the largest soundbar size under this brand.

As for manual inputs, you’ll enjoy the standard HDMI, AUX, and optical inputs. You’ll also receive optical cables on the box, so you can plug and play the soundbar right after you received it. Some even come with a wall mounting kit for easy setup on your home theater.

Aside from that, you’ll receive a remote controller with batteries. This is where you’ll tweak the settings, including volume and connection modes. For sound enhancements, you can use the Onn remote control included in the package. Unfortunately, it’s not a universal controller, so you can’t use it to control your television. It’s a hassle juggling two remote controls while watching, but it’s not really a deal-breaker for us.

Aside from that, the Onn 5.1 soundbar doesn’t have a mobile app. Your only choice of control is the remote you’ll receive.

When it comes to price tag, we can say that Onn is one of the most affordable in the market. Despite its low price, you’ll still get Dolby Atmos, which is already a steal. Also, it’s easy to find since it’s sold on Walmart.

Take note that aside from the soundbar itself, you’ll also receive either a subwoofer and/or satellite speakers. All of these are bundled for a low price. So if you’re setting up a home theater on a budget, these soundbars would be a great investment.

Sound quality. You don’t always get Dolby Atmos for such a low price that Onn is sold for. Although it’s not as fancy as bigger brands in terms of sound quality, we can say that it’s more than what we expected.

Bundles. We also like that the Onn 5.1 soundbars are always sold with a bundled subwoofer or satellite speakers. This is a good deal to balance the high and low audio registers. Also, it takes away the need for you to purchase the devices separately.

Quick setup. Onn soundbars aren’t as complicated as other options in the market. It’s basically because the device has fewer features, but it can be its strong suit as well.

Price range. We also like that Onn soundbars cater to the lower budget range. So even if you’re not ready to splurge on expensive soundbars, you can still get a taste of audio goodness with this selection.

Lack of mobile app. I wish Onn creates a mobile app soon, so the soundbar can be controlled in a much wider range. Also, it can be tricky sometimes to change the settings with just the remote on and without an actual screen.

Not all have Apple AirPlay. So far, only the Onn 5.1.2 has the Apple AirPlay connectivity. Personally, we don’t mind this limitation, but it’s surely a bummer if you want to play something straight from your iPhone.

It’s not completely wireless. While Onn managed to strip away some of the cable clutter, you still need to plug in several wires to get this soundbar working.

A 5.1 soundbar is a worthy investment if you want to upgrade your sound system. Compared to the 2.1 version, 5.1 has more speakers, thus better sound production. It’s considerably louder, too, without the cracking or frying sound that you’ll usually hear from cheap speakers.

Aside from that, a 5.1 soundbar is the best option if you’re setting up a home theater. It will give you a better listening experience through its immersive and solid audio quality.

However, it’s also important to note that 5.1 soundbars tend to be more expensive. This is understandable considering that it’s an upgrade from the previous 2.1 models.

Onn soundbars are made by Walmart partners. It’s because this brand is exclusively sold and owned by Walmart itself.

Nevertheless, Walmart has entered a partnership with Roku. The latter will produce some of Walmart’s exclusives under the Onn brand. This includes some of Onn’s subwoofers and soundbars. It explains why most Onn soundbars are also marketed as onn.™ • Roku.

On the other hand, some Onn soundbars, especially older models, may have been produced outside of this partnership. That means the soundbar might be manufactured by a lesser-known partner. Despite that, Onn soundbars remain affordable and decent enough for casual use.

Is the Onn soundbar wireless?

All of Onn’s latest soundbars have wireless connectivity. This means that you have the option not to use cables to connect the soundbar to your television or streaming device.

With Onn soundbars, you can utilize Apple AirPlay and Bluetooth. But if you want to go old-school, the soundbars still have HDMI, AUX, LAN, and optical ports. You’re free to choose the type of connection you want to use.

Whatever connection you choose, the sound quality will remain high and at par with the highest industry standards.

Overall, Onn soundbars are easy to set up since it works just like any other soundbars on the market.

After that, open the Bluetooth on your TV or any device you want to connect. Next, look for the Onn soundbar from the list of detected devices. Once you find it, select the device and wait for it to connect. The Bluetooth indicator on your Onn soundbar will turn static blue once the connection is successful.

We hope that this Onn 5.1 Soundbar System review helped you decide if it’s the right choice for your home theater or personal use. It’s a decent audio device with quality sound, simple controls, and an easy setup.

But since it’s an affordable option, you shouldn’t expect much when it comes to bells and whistles. It doesn’t have too many features, not to mention that it doesn’t have a mobile app.

Despite that, Onn remains a hit among budget shoppers. It’s because the soundbar offers just the right balance of quality and price.

What do you think of this Blast Onn 5.1 Soundbar System review? Let us know below! Buy on Amazon
Buy on Walmart