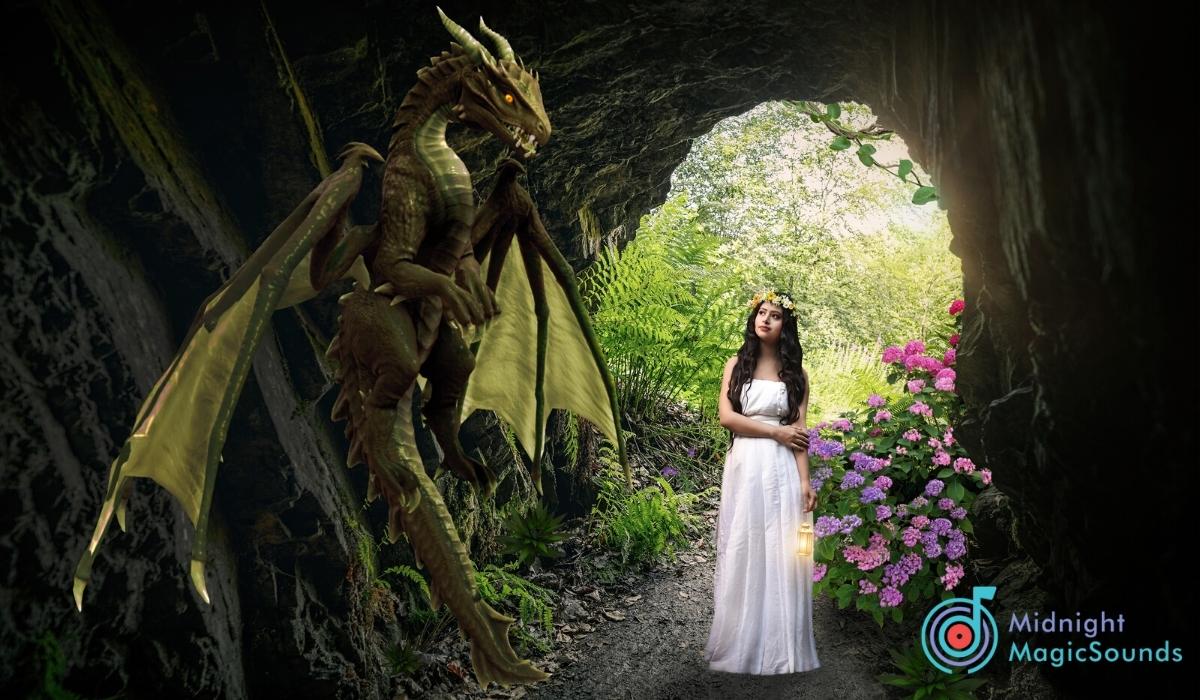 When it comes to mythological creatures, dragons have been present in many folklore songs for centuries. Many cultures portray dragons as ferocious creatures with magical abilities like breathing fire.

While some cultures might show dragons in their songs as evil creatures who can destroy anything in their path, others view them as their protector.

Regardless of the portrayal of dragons in each culture, they will continue to be among the most popular mythological creatures inspiring many songwriters.

Growing up, I developed an interest in folklore songs about dragons; most of them have been a mix of entertainment and education.

These songs about dragons present a message about the cultures of different communities worldwide on how we view dragons.

Some songs use the dragon to symbolize an enigma greater than the mythological creature. Songs about dragons are very popular across all age brackets, and some of the tunes and melodies will last a lifetime.

This compilation of some of the most epic songs about dragons worldwide cut across many music genres to entertain us. They include:

This is one of my favorite songs by Ed Sheeran. It is also the most popular song about dragons worldwide. The song is part of The Hobbit trilogy (one of my favorite movies, so you can see why I am biased) soundtrack, a popular spinoff to Lord of The Rings.

The song is about brotherhood and how the main characters will stick together in whatever tribulations they face ahead. They embark on a journey to meet a literal fire-breathing dragon named Smaug as they seek to repossess their gold fortunes.

Puff the Magic Dragon is a popular children’s song that we all listened to when we were younger, or is it just me? This song is about a boy, his dragon friend, and their adventures.

3. Heart of a Dragon – Dragonforce

This is a popular song that is the genre of metal. It is faced with exceptional drum beats that will get your adrenaline pumping.

The song narrates a warrior’s story on a quest to slay a dragon. I find the piece to have a great hook because of the duet between the drummer and the guitarist to get your heart racing.

4. Dragons of the North – Einherjer

This song about dragons was released by a Norwegian band. It is about their Norse mythology and culture.

If you are a fan of the black metal genre and mythological creatures like dragons, this is a song for you to enjoy frequently. The song is catchy to their fans and has many sing-along parts.

5. The Song of the Golden Dragon – Estas Tonne

This song has nearly 100 million views on YouTube and is worth the mention as the composer only plays melodic guitar tunes that set the premises in most folklore music.

Though there is no singer to back up with words, the tunes will take you to a world as if the composer is telling you a captivating story for 10 minutes.

This is a popular song by a British band named Queen, composed by their lead guitarist Brain May. Most of the track evolved from a jam session the band had at the studio while they were bladdered.

The song has over 3 million views on YouTube. While not necessarily about dragons, the song is believed to be about addiction to hard drugs. It was released in 1980 on their album known as The Game.

7. Tears of the Dragon – Bruce Dickson

This is one of the most popular songs about dragons by Bruce Dickson from his solo career. The song was composed and released in 1994 on his second album “Balls to Picasso”.

The song is talking about the departure of Dickinson from Iron Maiden. He uses the dragon and its tears as a symbol of the powerful emotions that he had kept in for so long and is now letting out.

This popular fan-made song has gained over 51k views on YouTube about Smaug of The Hobbit. The song, as a catchy tune, is backed up by a background voice of the dragon telling the protagonist that he made a mistake awakening him and he is dead.

What I find fascinating about the dragon song is the singer’s tone that builds up a moment when a disaster is about to happen.

This is a song by a popular Florida band about becoming the dragon. The most outstanding element of the first-paced song is the bass solo at the end of the song.

I believe there is no song about dragons in the metal genre about mythical creatures with an ending that can top it.

This is a popular dragon song released in 1999 as part of Guided by Voice’s Album titled, Do the Collapse. The songs narrate the story of a group of dragons who are awakened from their sleep and start to wreak havoc.

The song is slow-paced and has catchy guitar melodies that are captivating. Though the song has only 15k views on YouTube, the song has been appreciated by its fans, and a rock version was created.

I was surprised to hear Sisqo break his stride in this song. It is unlike most songs I was used to by him. It is a popular mainstream song by a hip-hop sensation named Sisqo.

The artist uses Euphemism to express that he can no longer withhold great power within him, a power which he symbolizes with a dragon. The song is catchy, with an easy sing-along chorus.

It is an important song to listen to when you feel the world is holding you back from achieving greatness through a burning desire within you, and you need motivation.

The song is a symbol of the ferocity and fire of the composer. The music deeply connects to fans of Built by Titan, and most appreciate it as it summarizes their favorite animated movie, “How to Train Your Dragon.”

The song is about self-motivation and a strong bond between friendships. The song has unique electric beats that can easily win a place on your playlist.

This is the beautiful lullaby that I use to put my grandchildren to sleep. The voice on this soundtrack is soothing and can leave you with a smile and a peaceful sleep.

This lullaby will surely put your kids to sleep and make they’ll surely be dreaming about dragons and other mystical creatures.

This is an original song written based on the fantasy literature of dwarves. This song has a poetic structure and rhythm. It tells a story of a dwarf’s bravery when they embark on a mission to slay seven dragons.

This is a song that gives off a type of David’s courage when he decided to face Goliath. If you are into medieval literature and mythical creatures, this song will hit the right spots when you listen to it.

Yet another song from what I consider one of the best film masterpieces ever, this is an original song inspired by The Hobbit.

The composer narrates a message from the perspective of Smaug, the king under the mountain.

It is a fiery song that the dragon establishes authority and might to those who dare to cross and trespass on this jurisdiction.

“Dragon” is definitely my favorite song from her album, “American Doll Posse” (2007). This song is directed at a lover that has a lot of baggage left over from their previous relationship.

In this passionate and intense song, the woman dedicates herself to her partner, saying that whatever has happened should be left behind and committing to making him get rid of that baggage.

This is a masterpiece from Gojira, a French metal band that enlightens the listeners to look at themselves from within.

The song challenges the listeners to see their dark side and address their demons, and the band uses dragons as a symbol of that. The song was released in 2005 in their album Mars to Sirius.

This is a beautiful song released by the singer on her 2014 album I Am Dragon. The singer uses metaphors to symbolize what they are with their lover in their relationship.

She compares herself to a dragon and her feelings towards their relationship, which seems like it is on the verge of collapsing.

The singer shows commitment toward her failing relationship, but we are left in the dark on the outcome of it all.

19. Dance With The Dragon – Jefferson Starship

This is a classic song released in the 1970s by Jefferson Starship. This song is about a woman falling madly in love with a dragon.

The song’s story shows the woman acknowledging that it is wrong to fall in love but cannot help herself as she is not in control of her feelings.

The story shows the need for the woman to dance with the dragon to feel his might and power.

This is a popular punk song by Yeah Yeah Yeahs and talks about a woman who is powerful, hot, and aggressive. It is part of their album “It’s Blitz!” from 2009.

The song’s vibe took a different direction from her usual type of music, but she does not disappoint with the song with amazing melodic tunes and a sexy vibe.

Finishing this list is the remix from several hip-hop artists that points out various society’s wrongdoing.

The singers point out multiple issues, such as low minimum wage and high cost of living. Hip-hop artists also constantly point out issues of police brutality in their community.

The song starts with the artists talking about the Dragon of Judah, showing their more religious and spiritual side.

There you have it, a list containing songs about dragons that cut across many genres. The pieces are mainly generally under the rock genre.

These are songs I listen to whenever I need that extra push or just want to rock out. If you love these majestic mythical creatures, you should add these songs to your list.

They can transport you to new worlds and are one of the best things you will ever listen to, trust me. If you want to feel inspired or even sleep after listening to a song about your favorite mythical creature, these are the songs you have to listen to!