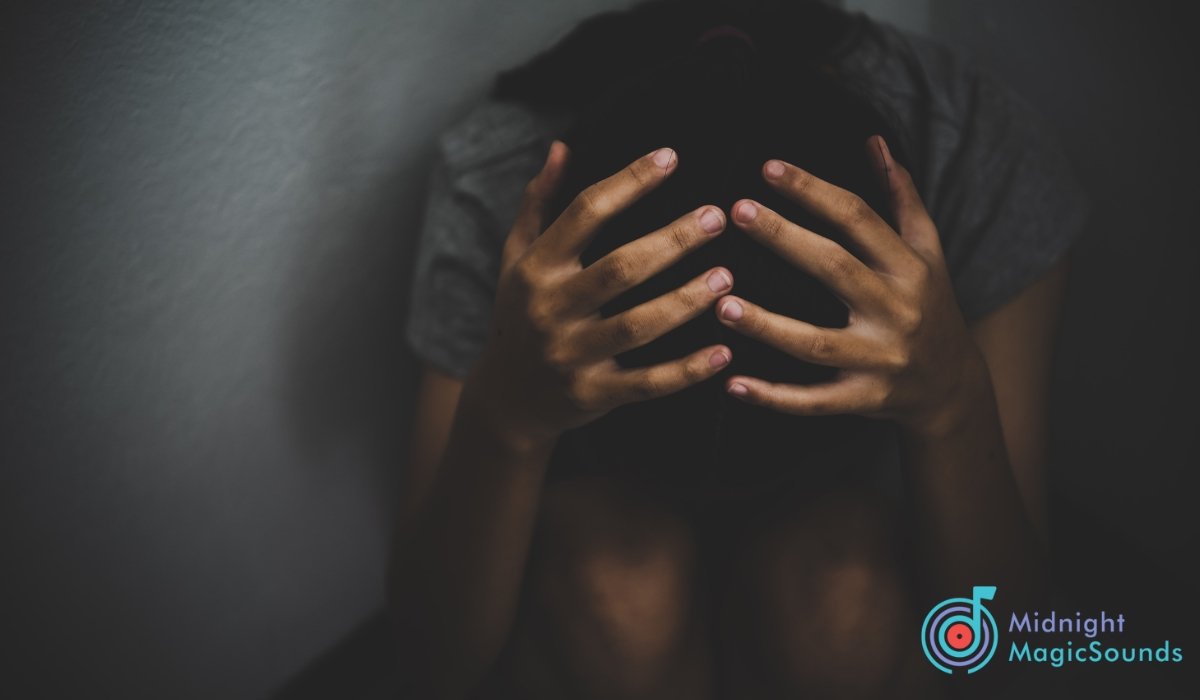 Feelings of sadness and dread are inevitable in our lives. To deal with them, we can dive into the most depressing songs of all time to give us a better perspective.

The songs help us get the support we desperately need in our dark times. Songs have a great gift of giving voice to our emotions; the most emotional ones are depressing songs.

We are human, and life’s challenges will inevitably get to us. So we need an outlet to cope with them healthily for a good state of mind. The songs below will help with that when life throws you a curveball.

They have gotten me through tough times, and I can only hope they give you the same solace. I have made sure that with this list of the most depressing songs of all time, I have diversified them to speak to as many people as I can.

These are some of the most depressing songs of all time that I have found:

Depression is a profound feeling of sadness that makes people feel hopeless and alone. Some people deal with these feelings by trying to bury them with substance abuse to escape the pain.

Lil Wayne is a popular hip-hop artist with immense success, yet he has come out talking about the creeping nature of depression. He talks about how he tried dealing with it through drugs.

Listening to it gives us an inner view of the sad lives people lead and the pain they go through while no one even knows.

Adam’s Song is an example of how far depression can take us and the bad decisions we make because of it. The song is about a teenager who committed suicide and the note he left.

Mark Hoppus wrote this when he was in a state of depression about being on tour and away from his family. While his bandmates had their girlfriends to look forward to when they returned from touring, he had nobody.

These relationships are the first we have as humans, and how they turn out shapes us into who we get to be. If you have had any experience with rocky relationships with your parents, this song will remind you of their depressive nature.

Never Let Me Go is an excellent example of the most depressing songs of all time, as it talks about the depressing nature of a broken relationship. The end of relationships might feel like the end of the world, and the band perfectly captures that in this song.

The song highlights the challenging task of letting go of a relationship that has died and how depressing it can get. It is perfect for anyone going through a breakup, and its depressing nature will move anyone that can relate.

The brilliant Sia graced us with her beautiful voice in this song about how depressing thoughts can cripple the best of us. The depressing lyrics talk about the dreadful emotions we get and the self-destructive thoughts resulting.

Sia explains how hard it is to ask for help in that state, and we can all relate to that. If you are going through it right now, you might feel the same but know you are not alone. In an interview, Sia admitted she wrote the song the night she attempted suicide.

This great emotional song encourages anyone going through depression; it emphasizes not committing suicide. R.E.M. recognizes the snowball effect that can quickly get someone from depression to self-harm.

If you are going through this tough state of mind, you might find calm with this depressing song. Suicide might sometimes like the easy way out, but it is a path no one has to go down on.

This emotion-moving song perfectly captures the urge to get assurance that everything will be ok when sad.

8. Lose You To Love Me – Selena Gomez

In this masterful depressing song, Selena Gomez talks about the challenges that come from going through a tough breakup. She recognizes that she needs to get over it but admits it is easier said than done.

Selena, at the same time, realizes the relationship is not good for her. She talks about how although the breakup is painful, it is necessary to find herself again, an anthem for anyone who has come out of an unhealthy relationship.

Recommended: Top 21 Most Popular Vietnamese Songs to Listen To.

Skyscraper by Demi Lovato shows us that sadness is a temporary feeling and we will get over it in time. She wrote it to deal with her pain when she was in rehab for self-harm and an eating disorder.

She reminds us that we are “skyscrapers” and nothing can bring us down as long as we don’t let it. Great for a list of depressing songs, as it might bring you to tears with the uplifting message.

10. Stressed Out – Twenty One Pilots

This song was a global hit when released, as it spoke to all of us in a way. It relays the depressing times of transitioning from teen to adulthood.

This transition gives us feelings of insecurity, fear of adulthood, and mourning the lost children in us. If you are going through this journey now or already did, we can all acknowledge how stressful, depressing, and nostalgic it is.

Fix You is a great inclusion of the most depressing songs of all time. Coldplay talks about wanting to help a loved one dealing with self-loathing.

As an unqualified therapist, knowing how to do it properly without making loved ones feel overwhelmed is hard. If you are in this situation, you can try being there for them as much as possible.

Not being able to help the ones we love is one of the most depressing things anyone can go through. It was written by Chris Martin to comfort his wife after her father passed away.

12. Only Happy When It Rains – Garbage

This is an alternative rock song with a brilliant depressing sound. The singer talks about how sad they are and how eventually, they got so used to it that that is the only emotional state they are comfortable in.

We sometimes get so lonely that is the only thing we know. But we should always try to get support if the depressing reality gets overwhelming.

13. Little Talks – Of Monsters And Men

Little Talk is about the loss of a loved one. What is more depressing than that? The song speaks of how grief can engulf you if you let it.

When we lose a loved one, it is probably the most emotional time for anyone to go through. And this depressing song may give you solace when you need it most.

This depressing song focuses on how depression is not a permanent state of mind and that we will get over it if we dig in and fight. This is a great song if you are suffering from loneliness, as it will give you the perspective you need to see that there is light at the end of the tunnel.

It is about a relationship that isn’t working anymore and the journey to letting go. The song will take you back to the times when we all should have let go a little bit sooner, causing some depression whenever you listen to it.

Sia’s songs are globally famous for their emotional and depressing nature, and this one is no different. “Chandelier” is a tearjerker of a song, putting it on our list of the most depressing songs of all time.

It shows how people try to portray themselves to the world while suffering inside. Sia sings of pushing it down, talking about how she doesn’t want to deal with self-destructive feelings and wants to be ok. We can all relate to the depressing feeling of wishing to be ok while you are not.

Recommended: 21 Best Songs About Creativity To Get You Inspired.

‘Life can get you down so I just numb the way it feels’ is a lyric from the song to show how he tries to run away from the pain of life.

The singer is in a toxic and unappreciative relationship that makes him feel sad to the point of wanting to numb himself to avoid the depressing reality he is in. Toxic relationships cause us pain and the only way forward is to get rid of them.

“Just A Dream” is one of the best depressing songs I have ever listened to. It talks about the loss of family and friends to war.

It shows how the brain is incapable of comprehending such a massive loss. The loss of anyone in our lives is an emotional moment where we need support as it can devour us.

This emotional song by The Fray talks about the singer’s relationship with God. He feels like God has abandoned him and left him feeling overwhelmed and alone.

It goes into the feeling of being isolated and lonely. It is a very beautiful song that will speak to you any time you have feelings of abandonment.

“Missing You” is an encouraging song to a friend in a bad state of mind. The piece is about a friend who is damaged and encourages them not to give up and concede the fight easily.

It is a depressing song that sheds light on how common mental health problems have become in today’s time. It is an anthem for people going through hell, letting them know those bad feelings are never permanent and will pass eventually, so just hold on and fight.

Pink sings this emotional song about having a supportive partner who helps you through tough times. She talks about how she is grateful to have him in her life as he gives her strength during her bad days.

She tells her partner not to give up on her as she tries to get better. This is a great one for a list of the most depressing songs of all time, as it shows the importance of being surrounded by people we love when going through hard times.

I believe I saved the best for last, with “Numb” being the last and most powerful in our list of most depressing songs of all time. The song talks about how the burden of unrealistic expectations weighs on us.

How sometimes our lives feel out of control, giving us dread, and how being numb feels like the only way out. This is a perfect song for you when you feel overwhelmed.

Depressing songs have a stigma to them as they are seen to encourage self-loathing, but it’s quite the contrary. These songs tap into the difficult times of our lives and give meaning to them.

Sometimes we go through hardships to build into stronger people, but when the building is going on, we don’t see it. So that is where the most depressing songs of all time come to play.

They give meaning to what feels like meaningless pain we go through. I hope you enjoy the song list.