For some reason, I thought this soundbar was only available in Costco. Kind of like one of those multipacks of toilet paper, here’s a multipack of sound, or something.

Did I do any research to see if I was wrong? Of course not. Why would I? I can be wrong on the internet, and someone will jump in to correct me.

But we are not here to talk about random strangers being a lot more efficient than Google. We are here for the LG SNC75 3.1.2 review.

I looked into another LG soundbar recently, and I was pretty happy with it. As expected, I had a few issues, but it didn’t dissuade me from checking out other LG soundbars. My thinking was, if I up the budget, those issues may disappear.

My expectations are simple: this soundbar costs twice as much as bars I would not mind recommending. This means I have to want to recommend it twice as much by the time I’m done playing with it.

I understand there will always be limitations to this type of technology. All I ask is that it justifies its price. If I can get more than that, I will be very impressed. 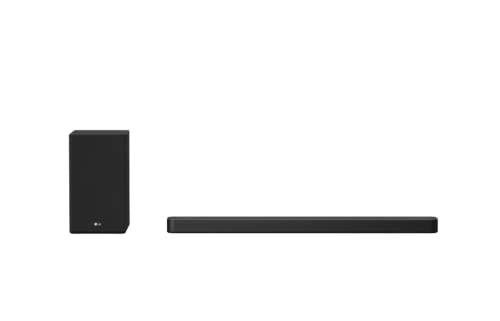 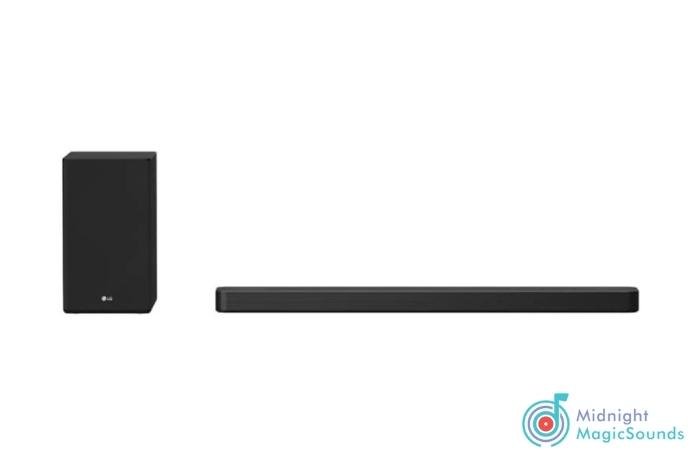 I think I’m understanding the LG look. At first glance, the setup looks sleek and minimalistic. However, when you pay attention to details, there is something very retro about them.

The top of the bar is made from subtly textured plastic, while the grille wraps around the front and the sides. Two additional circular grille moments are on the top as well.

The bar is just under 42 inches long, and it’s recommended to match it with a TV that’s at least 49 inches.

Then there’s a wireless subwoofer that is roughly the same size as a desktop one. A remote, batteries, and mounting bracket are included as well.

Kudos for including the cable management gadget. It’s probably not vital, but it was a lovely touch. 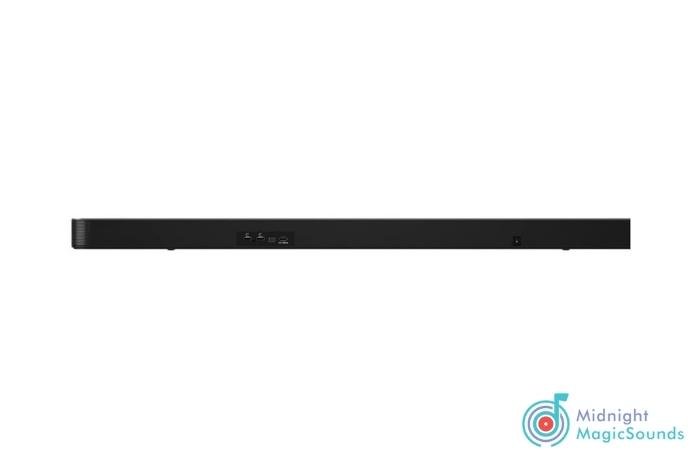 The SNC75 connects to any device through the HDMI cable, USB, 3.5mm jack, or Bluetooth.

However, the most interesting thing is that it also comes with built-in Google Assistant. You don’t have to log in or connect to other devices. Just say “OK, Google” or “Hey, Google.”

If you own an LG TV, you can use the same remote to control the bar as well.

Recommended: Samsung HW-Q59CT Soundbar Review – Is it Worth in 2022?

I have nothing to complain about. Everything feels sturdy and robust.

I would have loved to see even thicker cable cords, especially at this price point. Still, it’s fine, and it doesn’t look like they will break easily.

How easy it is to set up?

The most difficult thing is taking everything out of the box. It took me about 15 minutes to have the bar connected, with probably 12 minutes going into unboxing.

All you have to do is to plug the bar into the wall socket, then turn them on and let them locate each other. They should connect within a few moments, after which you can use the cable and connect the bar to the TV, or connect it via Bluetooth to another device. 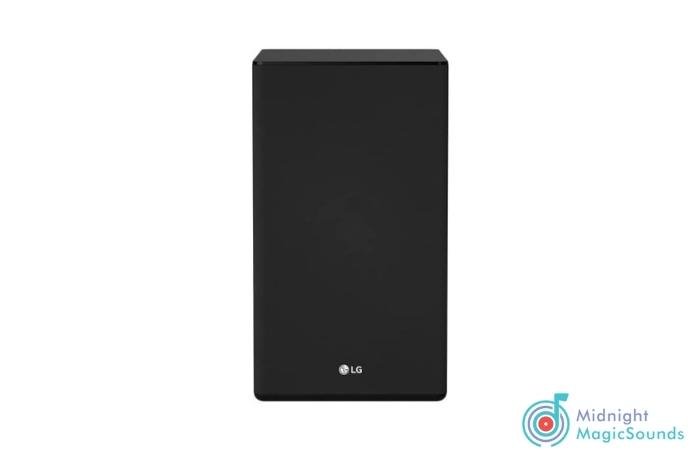 I am impressed. I had a set of full-sized speakers long ago that didn’t sound as good as this. Oh, how technology has progressed.

The AI is supposed to work out the size of the room and adjust the sound to it. So, we did some moving around. I tested the bar in the living room, the bedroom, bathroom, and pantry. I wanted also to go into the cleaning supply cupboard, but I couldn’t fit in it, so that didn’t happen.

The bathroom was a bit a waste of my times because I forgot about tiles and how sound bounces off them. Mea culpa. As for the others? It’s a pretty intelligent little AI. It gave me pretty much identical results, no matter where I was. Five stars.

This item was produced in partnership with Meridian, a British iconic audio gear manufacturer.

Automatically, the bar was set high since their stuff is some of the best on the market.

Listening to music was a treat. Not enough bass for certain genres, but I expected nothing more than that. Similar thing goes for gaming. It sounds great, but I will keep my headphones around for certain titles.

Now, movies. And oh, everything that’s holy, I am thrilled with it. As mentioned, the SNC75 performs better than some of my old speakers. I think it performs better that some of the newer models on the market. Let’s just say that my brain had a problem computing that it’s just a soundbar and not a complete surround system.

I played every movie I could think of, from Valhalla Rising to Transformers. I even went for a few black and white one (the ones without remastered sound, of course). There are no complaints from me. None. 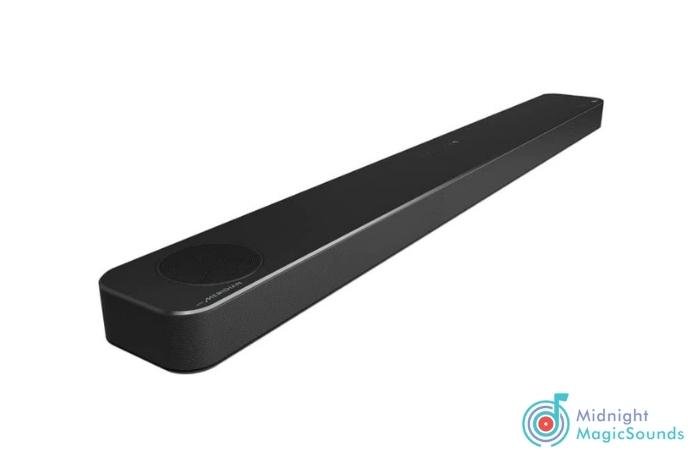 So, I like this soundbar. But this LG SNC75 3.1.2 review wouldn’t be fair if I didn’t push it to its limits and beyond.

I have a few tests I like to perform to see how audio equipment performs outside of the mainstream norms. I already tried to lock myself in the broom closet, so you know this will be fun.

We start with some Mayhem. This band is the best way to testing audio equipment because of their abhorrence of decent production. If Mayhem can sound good, everything will sound good.

Mayhem sounds good. Well, -ish, but it’s not because of the soundbar. I’ve dialed up the volume up to the max, and the sound stayed the same as when I was listening at the normal volume. I say it’s a pass and that this bar can handle almost any kind of noise.

Then I played with Google Assistant. If you have an Android phone, you know that sometimes Mr. Google likes to ask you if you were talking to it out of nowhere. Very needy, I know.

So, I put a documentary on and loudly mentioned several times how I needed to Google some of the info. Sometimes, I was met with silence, but sometimes, Goggle would either ask me if I were talking to it or would search for answers to my questions.

Conclusion: don’t talk while watching something. If you do, don’t mention Google.

Finally, it was time to see if this model is suitable for people with disabilities and hand dexterity issues. I do this by putting on kitchen mittens and playing with the remote.

Okay, it’s a fail for me. The remote is slightly better than others I got to test, but it’s still not ideal for someone with severe disabilities. I believe those with milder ones could use it or at least adapt to it.

Are 3.1 soundbars worth it?

That .1 stands for subwoofer. Though it’s debatable that a soundbar can give you an impressive amount of bass, it will still produce a more realistic sound.

You can easily compare it to playing the music on your phone through the built-in speaker or plugging in the earbuds. Even the cheapest buds will sound better than the alternative.

Is LG soundbar better than Bose?

In my humble opinion, no. I’ve also seen others that agree with me.

The thing you have to keep in mind is that Bose predominately sells audio equipment, while LG has its fingers in many pies. Speaking of pies, imagine LG making every type of sweet and savory pie, while Bose specializes in apple pie.

We can make a different arguments in certain product vs. product showdowns, but overall, Bose is a better brand for speakers and headphones.

Recommended: Sonos Arc vs. Bose 700: Which Soundbar Is Worth Your Money?

Most soundbars come with at least three front channels, but the ones in the back are where things get interesting. It could mean that there are channels built-in the back of the bar, but more often, this means that the bar comes with two satellite speakers.

I’ll be honest. Most people don’t need to dish out this much on a soundbar. I think that you are overspending if you are a casual movie watcher.

But if movie nights are a religion in your home? There are a scant few better ways to worship when it comes to sound.

I guess it’s still the early days, and there’s not much about people’s experiences after long-term use. For now, I’ve found mostly good reviews and people loving how easy it is to set up and the sound quality.