When I started making proper money, soundbars were still a cheap alternative to a full surround system. So I bought that.

However, some time ago, my life changed, and it required me to move frequently for work. It became impractical to tote my “home cinema” everywhere, so I had to look into a more compact solution. Ergo, soundbars.

Recently, I talked about the Samsung HW-Q59CT soundbar. It impressed me enough to want to continue digging and see what else is out there. First stop, LG.

Both LG and Samsung hail from South Korea and helped put that country on the map, at least with electronics. I have an impression that these two brands work as a team and not much as competitors. Samsung is dominating the TV and smartphone market, while LG makes some of the best home appliances. But how do they compare in the audio department?

This LG SN7R 35 5.1.2 review will try to answer that. We’ll also inspect the LG soundbar itself. I’ll also go through additional tests to see how this bar performs in somewhat unusual situations, as well as how easy it is to use in case of disability hand dexterity issues.

My expectations are simple: this soundbar is more expensive than the Samsung and I have to like it enough to spend that extra cash. I’ll forgive it for not giving me the same experience as a full surround system, but it still needs to be worth the money. 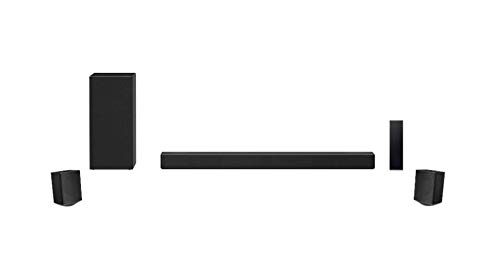 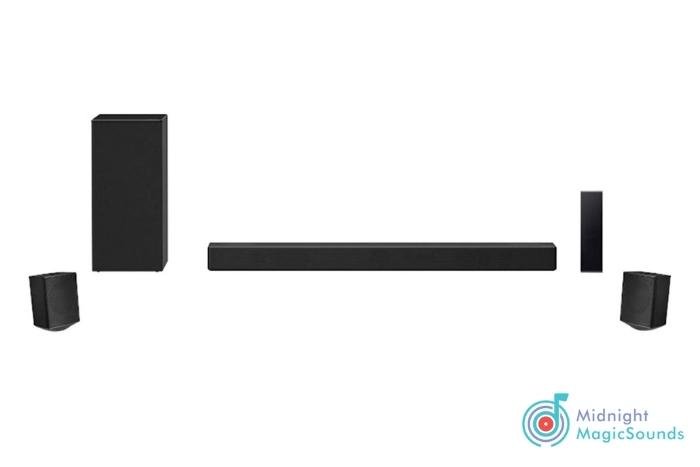 There’s a lot of stuff in this box. The entire system consists of a soundbar, a subwoofer, and two satellite speakers. Everything looks a little boxy, like it’s several steps away from having a vintage appearance.

The soundbar is just a fraction longer than 35 inches, 2.6 inches tall, and 4.7 inches deep. It has a grille that wraps around the front and the sides, with two circular pieces on top of the bar. The texture of the plastic imitates painted wood somewhat.

It also comes with an external wireless receiver for hooking up the subwoofer and other devices. Other things included are also wall mount brackets and the remote (with batteries). 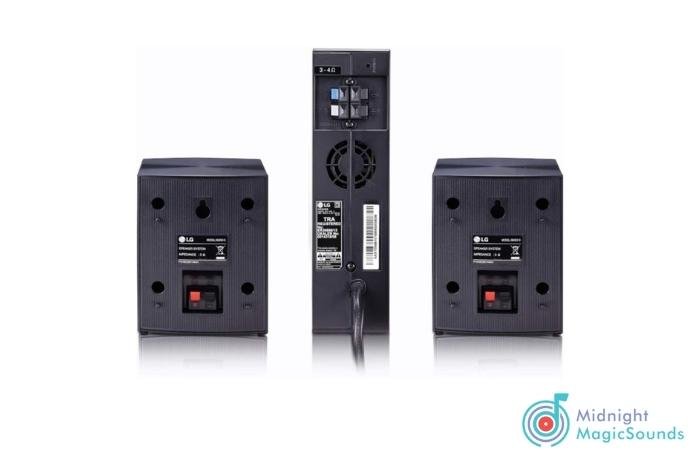 This soundbar is compatible with any device it can connect to via Bluetooth or an HDMI cable. There’s also a USB slot, so you can play music directly from a USB stick or external hard drive.

The official product description claims that it’s suitable for 40-inch TVs or bigger. However, I would take that with a grain of salt. If the TV has legs or a stand, bring up that number to 42 inches.

You can download an app for both iOS and Android that will allow you to control the soundbar from your smartphone, including playing music from it and adjusting the audio settings.

This soundbar is so heavy it should be classified as a cold weapon. Joking aside, everything feels robust and solid.

The plastic is that good stuff. I’ve dragged both the bar and subwoofer around to test the durability and didn’t see any scratches.

The cords are thick and don’t look like they will fall apart easily. Overall, I’m very happy and confident that I could take these on the road with me next time I move and not worry about them surviving the trip.

Super easy. You have to hook the power cables to both the soundbar and the subwoofer and pair them. Then connect the soundbar to the TV using the HDMI cable.

Connecting via Bluetooth is as easy as with any other device. Just make sure first to pair the two components. 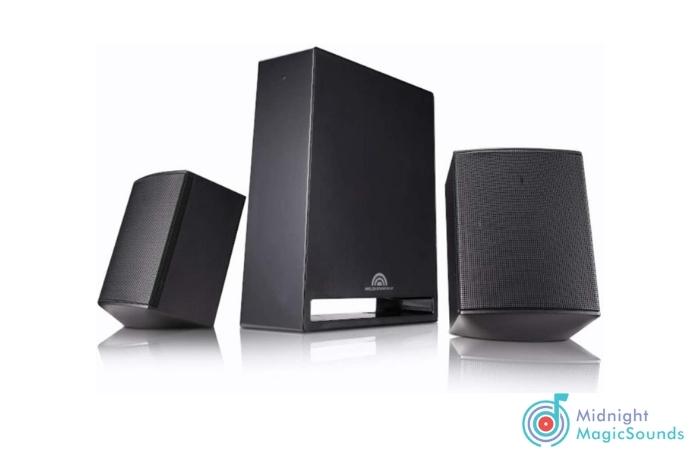 Before I get into anything else, this model has the best bass I’ve heard from a soundbar to this date. It’s still a big fish in its small pond, but it’s a fat and delicious one. I played some rap and hip-hop and, honestly, outside of getting larger speakers, I don’t think I could do better.

I went through other genres as well, and the only time I was not impressed was when I played contemporary pop. Thought, that has more to do with the music than anything.

The app is a nice touch, but more for the equalizer than convenience. The built-in EQ presets proved themselves useful frequently.

I played some video games as well (for science, of course) and have no complaints there at all. I still prefer headphones for certain titles from my collection, but still enjoyed the atmospheric sounds I got from the LG soundbar.

Finally, I had to do the movie test as well, which usually includes at least one Michael Bay movie and some anime. On one side, we had all the explosions that had to sound realistic, and on the other were those high-pitched voices that… should not sound too screechy. As far as I’m concerned, we had a pass.

If I had to nitpick, I noticed sometimes something unnatural about human voices. It was nothing too obvious, more like an uncanny valley. Some speaking voices would simply sound wrong like they don’t quite belong to the person on screen. It happens to different voices in different modes, so consider yourself warned.

If you’ve been here before (hi, friends!), you know I have the Mayhem test. For the newcomers, Mayhem is a band that sounds like a bunch of broken vacuums. I’ve encountered a tiny number of home speakers that can handle that at full volume, so it’s my favorite way to test what other audio equipment is capable of.

I give LG a pass. There was no crackling, nor did it burst into flames. I would not say this means you can use the soundbar for your weekly raves. However, if you want to have a little get-together and play your music louder, it will still sound good.

I followed that up by taking the soundbar out. Without a wall for the sound to bounce against, you can see the clear potential or the lack thereof. The results were okay, good enough for a model that was not designed for outdoor use. I could still hear a lot of the details, but I had to crank the volume up.

Finally, it was time to test the usability. I did that by putting on a pair of kitchen mittens and playing with the remote. Compared to Samsung, it was a lot easier to adjust the volume and press mute. The rest of it, not so much. In my book, if I can’t give a remote a 4.9/5, it gets a zero. I would recommend either getting a different remote or another soundbar altogether.

Since the set came with an external wireless receiver, I also walked around a bit to test it out. All in all, it improves the connection between it and my wireless devices. I could even play music and send commands with the phone app even with a wall between us.

My overall score for this model is 4.9 stars, with the price being the only thing that would prevent me for giving it full marks.

No eARC, just regular ARC. However, other models released since 2020 do.

If we are comparing Samsung HW-Q59CT soundbar to this model from LG, Samsung comes out better at higher volumes.

I slightly prefer LG form gaming, but find them more or less equal for playing music.

Will a Samsung soundbar work with an LG TV?

Yes, as long as you can connect it with an HDMI cable or Bluetooth.

However, there are advantages to pairing apples to apples and oranges to oranges (Samsung is an apple in this case because Korean for apple is “sagwa”, and that’s close enough). Both brands make it so you have the best experience if you pair their products with each other. At the very least, you get to control several devices with a single remote.

Let me wrap up this LG SN7r 35 5.1.2 review with a few additional thoughts. I like this soundbar but I don’t know if I could recommend it over something more affordable. I guess that it’s in that weird in-between space where it’s not quite good enough to be an aspirational investment, neither is priced low enough to be considered a steal for the quality.

If you can afford it, go for it. You’ll love it. If it’s outside of your budget, don’t bother saving up or putting it on your credit card. You’ll find other options (including some from LG as well) that have an impressive performance at a lower cost.

Other positive reviews I found online agree with me here. I went over so many of them saying how it’s one of the best purchases they ever made. But there are also customers agreeing with me about the cons.