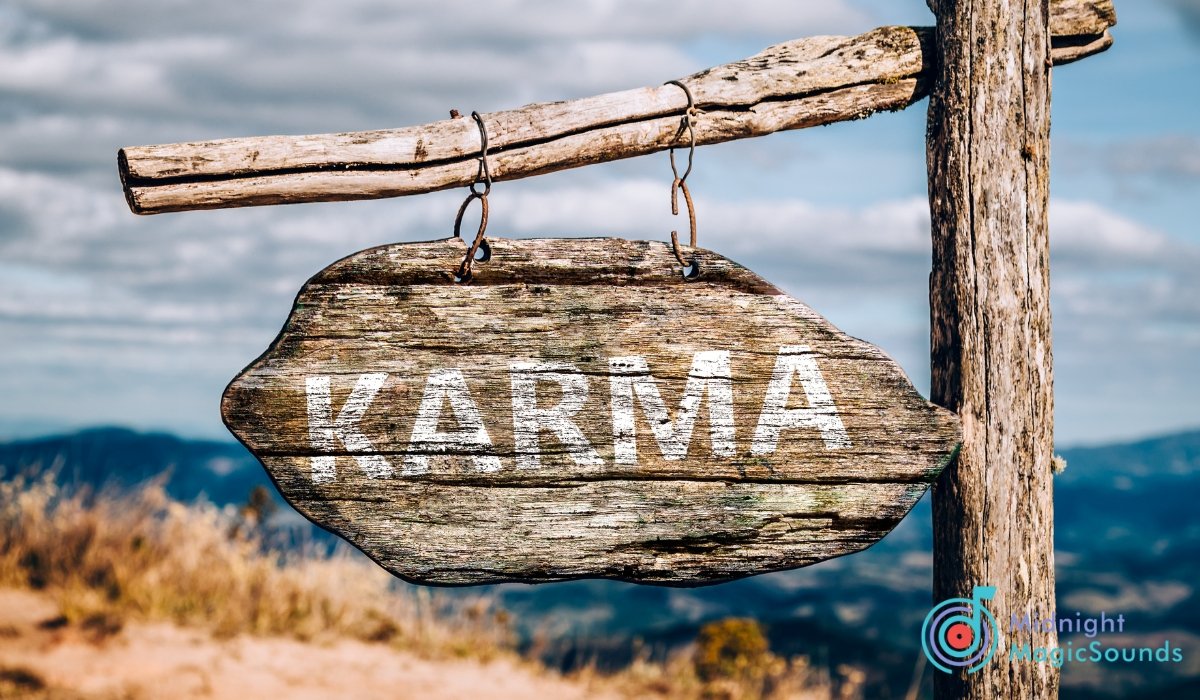 Numerous songs about karma are written from different perspectives of composers. These songs tell the concept of cause and effect and that our actions have consequences.

This word originates in ancient India and has become a life mantra to many globally. Many believe that our good deeds will receive better rewards in the future, and the negative ones we experience will also be paid for in the afterlife.

This cosmic justice system has inspired numerous musicians both positively and negatively. These powerful statements in music are a significant influence on many people’s lives.

Below is a compilation of songs about bad Karma from multiple genres that I found interesting.

The first song on this compilation is a classic song released by The Culture Club in 1983. The song is part of their Color by Numbers album and talks about Karma that one gets from not being true to oneself.

The vocals and instrumentals show British pop music at its absolute best in the 80s.

2. Before He Cheats – Carrie Underwood

Before He Cheats is one of my favorite country songs, as Carrie tells a compelling story of revenge and karma that a cheating partner deserves. It was one of her earlier songs released on her debut album and had rock energy.

The song made the artist win Single of the Year from the Country Music Association Awards, among other awards.

Released in 1970, it is a shock that it has been over 50 years since this masterpiece was composed. The song’s lyrics carry a message and belief that our actions here on earth have an effect on our future lives.

The song was written and recorded in a single day by the artist, unlike most of the songs by The Beatles. There have been numerous covers of the song by popular artists.

4. What Goes Around…Comes Around – Justin Timberlake

Though it might be longer than an average song, I consider this piece Justin Timberlake’s finest work. It tells a story of a cheating girlfriend in a relationship, and it had been speculated that it was about her ex-girlfriend Britney Spears.

The artist’s vocals and eloquent storytelling make this track one of the best songs about Karma to have ever been composed.

Radiohead will go down in history as one of the most complex and brilliant bands to ever exist. In this song, there have been multiple attempts to analyze the lyrics and music videos to find the track’s true meaning.

Though the vocals are melancholic, they are also angelic, and the song video shows us no one should be responsible for serving karma to others or you too will get it.

Taylor wrote this song to express her frustration about her undisclosed former female friend that tried to sabotage her. Though she never confirmed who she was, her fans have speculated that it was about Katy Perry.

The song’s lyrics send a message that you will get what is coming for you soon from the composer. The song has managed to accumulate over 1.5 billion views since its release in 2014.

With over 128 million views, this song is one of the most famous songs about karma in this playlist. This slow jammed track by Queen Naija was released in 2018 and reflected the artist’s past relationship.

The lyrics tell a story of betrayal. She stayed with her man through thick and thin but he ended up breaking up with her. In the song, she’s warning him that soon enough, karma will catch up to him.

8. You Get What You Give – New Radicals

The next song about karma in this compilation is a 90s hit single; You Get What You Give by New Radicals. The lyrics not only have a message of what goes around comes around, but I found it brilliant and uplifting.

There have been many testimonies by the band’s fans that this track saved their lives due to the message that there is still hope and to continue doing good and living despite life’s challenges.

Recommended: 21 Songs to Celebrate Being 17.

Alicia Keys hitting the high notes on this piece always gives me Goosebumps. The song has stood the test of time as the unique and powerful melodies were still as entertaining when released almost two decades ago.

The artist narrates a story of losing love in a relationship, where the guy rejected her as he didn’t love her anymore. After a while, he comes begging to get back together.

Alec Benjamin is an artist whose songs are worth listening to, as he is an incredible storyteller. The song is about a narcissist who has broken multiple girls’ hearts.

He later realizes the damage he has done, and it is just a matter of time before karma eventually catches up to him.

Karma by Opeth might be their best track on the “My Arms; Your Hearse” album. This is because of the massive weight of its lyrical content, where the song’s verses paint a beautiful yet dark picture of isolation.

I found the final guitar riff on the song to be quite frantic and violent compared to the other piece on the album.

12. True Friends – Bring Me The Horizon

Oliver Sykes wrote this song and released it in 2015 about his past relationship in which he betrayed his lover. The lyrics show that he doesn’t want anything to do with her and believes karma will catch up to her someday.

The song was a way for the composer to come to terms with what happened to him and release all the anger he was bottling up.

Karma by AJR is one of the most interesting songs about karma I have ever listened to. The song’s lyrics underline the theme of karma in a unique way that not many composers do.

We are taken on the mind of the artist who tries to wonder how his life is not that great. He questions why he is not receiving good karma despite being good the whole year.

There are moments in life when you notice some who pretend to be friends, but they are your foes. Tiffany Alvord tells a story of a group of friends who conspire to make her feel that she doesn’t belong.

They go to the point of writing rumors on bathroom stalls about her. The lyrics are a way for the artist to express herself and tell them that karma will return to haunt them.

Karma’s Payment is from “The Fruit That Ate Itself” album by Modest Mouse. The song has a slower rhythm than other songs in the band’s album, but I still found it to be a great listen.

The song tells the story of how the protagonist got what he deserved. One day the singer’s car broke down but a guy helped him for free, saying karma would pay for his deed. The protagonist ditches him and later down the line, his car got jacked.

The next piece on this list is Karma Killer by Robbie Williams, released in 1998. The singer wrote the song to express his frustration about his former music manager.

The lyrics show the artist’s hate towards his ex-associate as he wishes to choke on his favorite drink. The song has a catchy tune that will surely get stuck in your head when you listen.

17. Only a Matter of Time – Joshua Bassett

Similar to his previous track, Lie Lie Lie, the artist shares similar sentiments in this piece. The song focuses on the idea that our deeds will eventually catch up to us.

The theme of karma in this song shows that the artist was sending a message to the same addressee. It has been speculated that the song was addressed to Olivia Rodrigo after they were in an entanglement with the composer.

Every time I listen to this track I am transported back in time, and the nostalgia from that experience is so powerful. I believe music is the literal time machine for that kind of experience.

Karma is Lloyd Banks’s third song in his debut album, “The Hunger for More.” The song is about unrequited love and how the composer is moving on.

Maxwell’s Silver Hammer is a dark comedy about a medical student who murders people. The song was written by Paul Mc Cartney, who got inspiration from outrageous stories he heard growing up.

This type of composition shows his contracts with John Lennon, who focuses more on actual people and events.

The next song on our list is Make It Bleed by Whitechapel. The track has a heavier metal sound, and its lyrics express the narrative that we all make mistakes.

The melodic opening and closing of the song add to the beauty of the song.

Jessica Andrews is a country music singer who has been topping the music charts since she was 15. Her most significant success in her career was when she released “Who I Am,” which hit the first spot.

Her song Karma has the usual theme of what comes around and goes around, similar to songs in the category.

This list contains some of the most interesting songs about karma I have ever listened to. All the artists explore the theme of karma in a unique way that lets us believe that our actions have consequences.

The songs allow us to learn more about karma through the artists’ experiences, while some tracks prove to be fictional but with a moral lesson. If you are on a journey of learning about karma and love music, be sure to check out these incredible tunes.