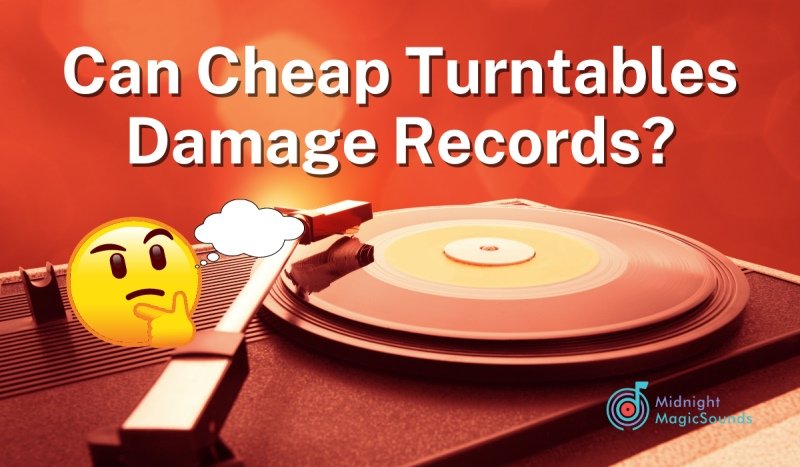 As we get older, our possessions start to mean more to us.  It’s not that they didn’t when we were children. It’s more that we begin to understand the value of properly taking care of our things.

So we take an extra moment to return a DVD to its case; we remember to run the battery down all the way when it is new before charging to make it ultimately last longer.

Collectors, especially, are sticklers for keeping their collections as pristine as possible. It’s sometimes for the sake of resale value, but often it’s simply because they really love their things. DVDs and records require special care, and they should never be stored in extreme heat.

Records, particularly old ones, are a sensitive medium. It’s one of the many reasons so many people have started to digitize their record collection, but they lose some of the audio quality in the transfer. You’re never going to get a purer sound than you are from a turntable.

That turntable, however, must be the right one, and you must know how to use it. If you buy a professional DJ turntable and don’t know what “reverse” does, you’re likely going to ruin a record. A cheap turntable, too, can ruin records.

If they have a cheap or inefficient stylus, a cheap turntable can do some real damage to your collection. Fortunately, though, that doesn’t mean the entire turntable is useless to you. There are some quick replacements you can make to make an inexpensive turntable worthwhile.

The Importance of the Needle To understand why the stylus, or needle to laymen, is such a vital part of the turntable, we must first know how it operates. The stylus usually sits within the grooves of a record. To produce the right sound, it has first to find that groove and also be the right weight. This can often be just a matter of having the right material.

The stylus may not look like it’s under very much pressure; it appears to sit lightly atop the record. However, the pressure of playing a record is about 26 tons per square inch. It’s also doing a lot of footwork. To play a full LP, the stylus has to move approximately 2 miles.

That’s an awful lot of work for a tiny little needle, so it naturally wears down over time. Any debris encounters on its journey, even dust, is going to contribute to that erosion. When this happens, you’ll hear it on the speakers. That is the crackling and spitting noise that happens sometimes.

The crackling sound may be due to other factors; however, it is often a sign that you should change the needle. A needle should be changed regularly; however, how frequently that depends on what kind of stylus you have. There are many different kinds on the market, but the general agreement amongst audiophiles is that most of them wear down fast.

The best material for a stylus is diamond. You’ve probably heard old expressions about how durable diamonds are, and they’re all absolutely true. It’s the strongest material known to man, and a diamond stylus has been known to last for up to 1000 hours of playtime. Some styluses are even rendered unsuitable for use after just 40 hours.

You may have seen elliptical or spherical styluses advertised. These are terrible options, as they easily scratch records, so don’t be fooled by their cheap, alluring cost. Stylus with a diamond tip is the best option. While the price is high, they are worth every penny.

A worn or cheap stylus is not the only thing that can damage your collection. There are other components on a turntable that, when produced cheaply, can cause serious damage. The stylus’ weight is heavy. That’s why the tonearm and counterweight work to fine-tune the pressure the stylus is exerting on the record.

Too much pressure and the record could crack, however, a stylus being too lightweight is also going to cause listening issues. As a rule, you typically want your tracking weight between 1.5 and two grams. You can usually find the adjustment settings at the end of the tonearm.

However, if any of these components are not made well, you’re never going to get the right weight.

There have been some studies done, and the research shows that a cheap turntable made with inexpensive materials can start doing damage to your record collection after as little as 1000 plays.

That may sound like a lot, but consider how often you listen to music. So it’s important to find a turntable that works well, but also one that you can afford.

What You Can Do

Buying both a high-quality turntable and an excellent, diamond-tipped stylus is not easy for someone on a tight budget. Fortunately, you don’t need to get the most expensive turntable. Price is not everything in the turntable market, and there are some upgrades you can make after purchasing a cheaper one.

In that range, you can find many options that include a stylus that can be easily upgraded. But how much you’re willing to spend is going to depend on how much you care about your music.

One way to think of this is in terms of your other creature comforts. How much were you willing to spend on television, a soundbar, a pool, a lawnmower? If your music is as important to you as any of the things you’ve invested a lot of money in, then you should buy accordingly.

The most important thing to remember is that even a diamond-tipped stylus must be eventually replaced. Time wears everything down, and the cheaper your turntable is, the more likely it is to have other equally problematic components and to damage your collection.

This is why it’s better to invest in a high-quality turntable with a diamond-tipped stylus.