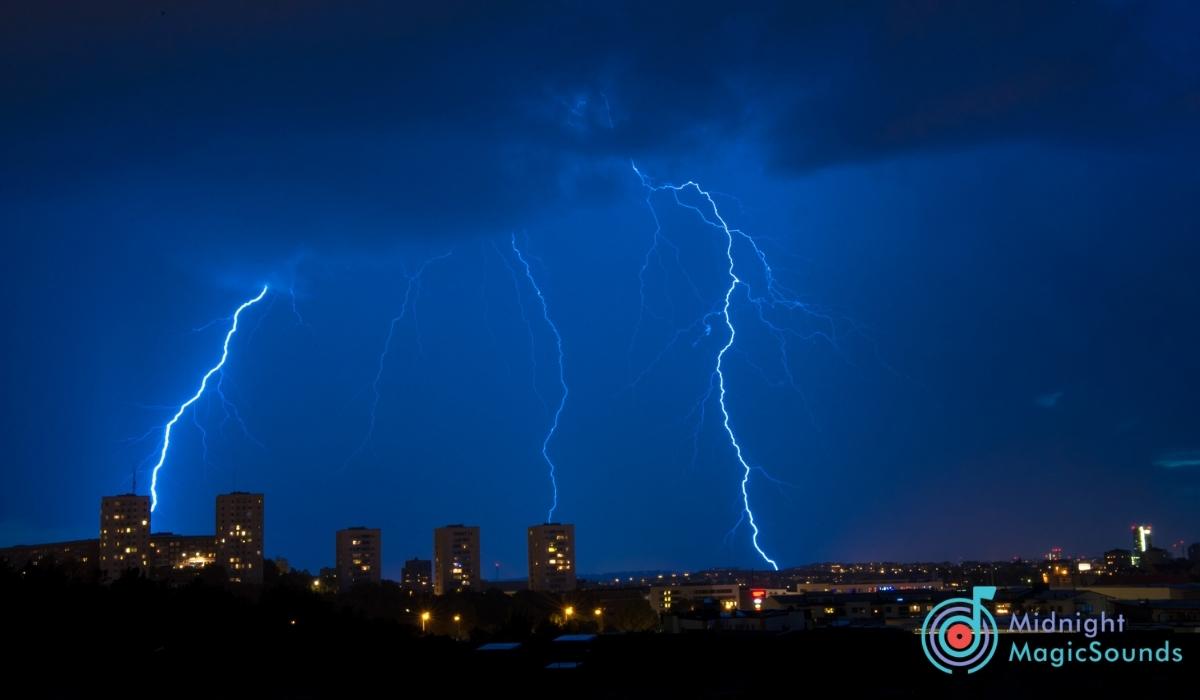 We come across music almost daily, whether via radio, tv, or someone just randomly singing next to us. Music has a way of speaking to us where words fail.

Music has been known to bring people together, improve one’s health and overall well-being, and create an outlet to express oneself regardless of our cultural background. Music can also help one escape reality.

Sometimes people listen to music just for fun. Whether young or old, thunder and lightning have always riveted people, and songs written and sung about them have always been as electric as their components.

Thunder and lightning are some of the most fascinating types of weather phenomena. These mysterious forces are often considered a source of inspiration for musicians and songwriters.

Most songs about thunder and lightning are usually in rock or metal styles. However, they can also be country, rap, pop, and more. Most of these songs use storms to connote religion or symbolize a massive disruption in their lives.

21 Best Songs About Thunder And Lightning

Are you in the mood for some electrifying songs? The list below will explore why these are the top-rated 21 songs about thunder and lightning.

Written by Beck and multi-award-winning Pharrell Williams. In the song, Pharrell Williams plays the drums and keyboard. The song has different weather elements, but according to the writers, Beck recalls a phenomenon he experienced that led to the destruction of things around him.

There seems to have been a thunderstorm, which brought down various mountains, temples, and prison walls. He also recounts flooding in the area, and children fleeing since there is nowhere to hide. The beats to the song will get you on your feet dancing.

Award-winning Garth Brooks wrote this song about an unstable marriage. It’s a song about cheating where the husband returns home after having an affair.

As he pulls into the driveway, the wife looks at him through the window, and when he enters the house, the wife is full of rage. The thunder symbolizes the wife’s wrath.

There is an extra verse only heard at live performances, which includes a line where the wife goes in and gets a gun to kill her cheating husband. In order to make this song available commercially the verse had to be omitted.

It is ranked 111 on Rolling Stone’s 500 Greatest Songs of All Time list. The legendary American singer and songwriter Bruce Springsteen wrote this song in 1975, released on his album, “Born To Run.” The lyrics describe a young woman named Mary, her boyfriend, and their “one last chance to make it real”.

Thunderstruck by the legendary band AC/DCA and is thought to have been inspired by a near-death experience. The songwriters: Angus and Malcolm would often tell a story where Angus was flying in a plane that was struck by lightning and nearly crashed

It is a heavy metal hit that was released in 1990. The song is generally about celebrating and having a good time. It is an all-time fan favorite for most rock lovers for its unbeaten riffs on the intro about thunder and lightning.

The famous American rock band Kiss has a song titled God of Thunder. Regarded as one of KISS’ best songs, it was a banger hit because of how it captures the clap and rambling of thunder. Its loud and catchy chorus makes it a hidden, fun favorite tune.

Its fast tempo and heavy guitar riffs get one’s heart racing to the beat in no time. It is undoubtedly one of the top thunder and lightning tunes. The song talks about the singer’s dream of becoming a rock and roll god named God of Thunder.

This song propelled Jake Bugg to fame in 2012. The singer is experiencing a string of good occurrences. The vocalist is portrayed in the lyrics as someone who accepts everything that has been placed on his plate for him and who will take the opportunity when it presents itself.

The lightning bolt may also stand for love at first sight, in which case the singer would be willing to constantly take a chance on romance.

Imagine Dragons are a pop-rock band that has risen to fame in the last decade. They are famous for their hit songs Believer and Radioactive. Thunder featured as number one on the US pop songs charts.

In the song, the singer is taking us back to his youthful and idealistic years. He didn’t let his peers (who didn’t bother to dream) hold him back back then because he dreamed of the fantastic things he wanted to do. Thunder, here means that when he was a kid, he was “lightning before the thunder.”

If you are a rock fanatic, the guitar riff at the song’s beginning will get you hooked. The song is about a girl who struck the vocalist within his heart like a bolt of lightning. He goes on to lament about having to let the mystery woman go.

The Pearl Jam rock band might not be your household name for top rock bands, but with this song, you will be engrossed from start to finish, especially with the euphoric instrumental.

It was recorded in 1956. This song is a classic yet chilled groove. Listening to it makes you understand why Howlin Wolf is so legendary. His vocals and instrumentals merged so well. The lyrics are “a pastiche of ancient blues lines and train references, timeless and evocative”.

This song is definitely a masterpiece by Ozzy. He showcases his vocal performance as he has never done before. The heavy metal guitar riffs and drums work harmoniously with his vocals in this rendition.

The electrifying imagery in the song reminds us that regardless of how powerful we are, we are all mortal. It was ranked number 9 in the UK charts making it one of the best songs about thunder and lightning.

Chi Coltrane is a renowned American songwriter and singer. She was born in 1948. Thunder and lightning was one of the best-selling songs on her first album. She sings it passionately and describes falling in love with a controlling lover.

Probably one of my favorite songs from Jessie J. Her retro vibes take us back to the 80s. It starts softly, and the euphoria builds up, clapping like the thunder of a catchy chorus.

The song is about her relationship with God. She describes it as thunder that hit her and changed everything in her life. She hopes to spread positivity and faith to her listeners worldwide through the song.

13. The Shock Of Lightning – Oasis

The next song about thunder and lightning is English band Oasis’s “The Shock of the Lightning” from their studio album “Dig Out Your Soul” (2008). The song is about the concept of love and what it entails.

The singer narrates a story about how he becomes suddenly aware that he might be falling in love but struggles to accept it. He keeps making the argument that the sensation is all in his head and that he feels out of control but he is tied up tight.

The phrase “shock of lightning” is perhaps a metaphor for how shocked he is by how he is feeling, perhaps a spark between himself and the person he is falling in love with.

Undoubtedly one of Beck’s best pieces in the album Stereopathetic Soulmanure. From its fascinating and well-articulated lyrics to its rendition, as a listener am usually left in awe.

This song was inspired by Beck’s personal experience. It is about how as human beings, we all have inner thunders (steam) that we need to blow off sometimes.

The song was released in 1988. It’s a Riot fan favorite, especially with the heavy metal rhythm. The song is about a hero’s struggle to protect the people he cares about. Thundersteel is the hero’s sword that he uses in combat.

This song was written by Leo Sayer and Tom Snow and released in 1977. It is a soft rock. The song is about how Leo Sayer met a woman and fell in love with her in just an hour. He describes that the voice in his head tells him to not fall so hard for a woman he just met but a thunder in his heart drowns it out.

He sings about being in love with a woman he isn’t sure he should be with. It hit the charts in the UK, Australia, United States, and New Zealand upon its release. A remix to the song was released in 2006.

What a debut! This song was Luke Comb’s debut single, and so far, it has received 3x Platinum recognition and sold more than 670,000 copies. In the song, Luke talks about being out of town and bumping into an old flame.

Something that wrecked his whole world, and he compares it to being hit by thunder, lightning, and a hurricane. The lyrics will keep playing in your head even after the song ends. Making it a top favorite song of thunder and lightning.

This song was the band’s fifth song from their debut album, “Boys Like Girls”, and even though it didn’t get a lot of popularity, it eventually became certified gold. This song’s lyrics make it clear that it is about a summer romance and and holding on to it even after it’s over.

The Owl City Band features Sarah Russell in this song. Sarah Russell is known for her angelic and seductive voice. And with this addition to the song, you will undoubtedly find yourself singing along to the lyrics, especially the chorus.

The song is about how a woman falls in love with a ghost. Though doomed from the start, she is thunderstruck.

This song was written by the group lead Jeff Lynne. In the song, Jeff takes us back to a point in our lives when we fell in love, but unfortunately, it was one-sided. Jeff speaks about falling in love with a lady who didn’t feel the same towards him.

He compares this to a passing storm, which denotes him falling in love with the lady, yet the lady doesn’t reciprocate his feelings. After the storm comes the Summer season which he likens to how happy he feels thinking about the girl.

The song was released in 1995. Its nicely arranged chord progression will leave you in awe. It is about two people who try to communicate their electric emotions towards each other, which are likened to thunder and lightning in the song.

The humor in the song is that every time the postman tries to deliver the letter, the receiver fails to get it as the postman is struck by lightning.

You now have my all-time favorite songs about thunder and lightning. The next time you are in a storm and need to get some work done or need some motivation, I hope you can add these tracks to your playlist.

Most of these songs have won multiple awards and are timeless since their popularity is still surging despite most of them being released decades ago. Thunder and lightning mean something more profound to the composer of the songs.

In most cases, it denotes falling in love, falling out of love, finding God or a religious breakthrough, and sometimes a newfound passion for rock music. Knowing this helps one understand the lyrics to the song even better.