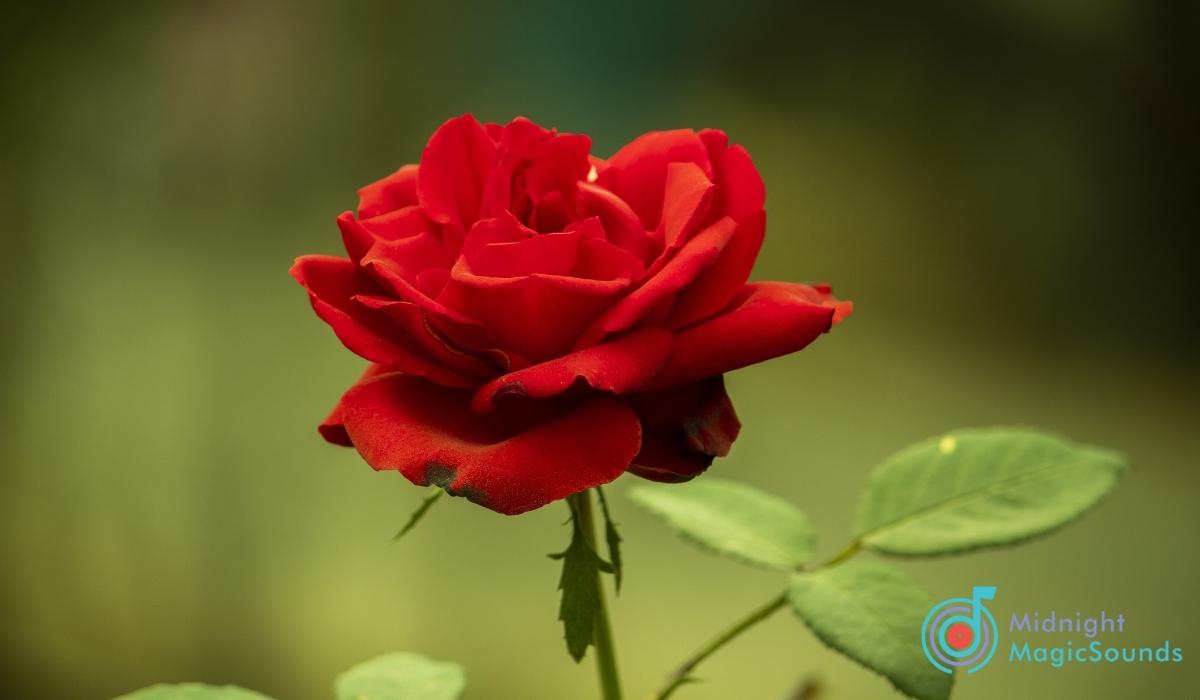 Music is one of the most moving and touching forms of art one can experience, and what better way to express yourself than to sing songs about roses? The rose can be metaphorical, giving a whole different meaning to the song.

But that is the whole point of art. I believe it is about the subtlety, the nuanced way of broaching a subject, and most importantly, the expression of oneself in a unique way that shows a mastery of language and music.

The rose is by far the most beautiful flower. Giving it to someone can rouse feelings in a partner or friend. It is no wonder that this flower has made its way into multiple songs.

Music, in its way, achieves the same effect as a rose. It moves people, elicits feelings from them, and lets them know they are in your heart. I found songs about roses to exist in multiple genres and languages and created the playlist below to share with you.

The following songs talk about roses in their unique way and bring out beautiful messages to the listeners. They Include:

Mumford and Sons are a British folk rock band from London. The rose of Sharon is a symbol of beauty and has been mentioned in the Old Testament. The band attributes this sacred beauty symbol to a lover.

2. Every Rose Has Its Thorns – Poison

Every Rose Has Its Thorns is a song that the band wrote about its lead singer’s failed relationship. Bret Michaels said that in the song title, the rose represented his blossoming music career, while the thorn was a metaphor for how success had cost him the relationship with his girlfriend.

This song serves as a reminder that relationships are delicate and complex and require patience and understanding, but most of all, they require communication.

The rose in this song is Patti Smith’s mother, and this song pays tribute to her. She explains how selflessly her mother cared for her and how she would be there every morning without fail.

The feature I found unique about this song is that she also sings from her mother’s point of view and how she seemed almost happy as a mother to do everything for her child.

This song certainly isn’t for everyone with its unique sound and lyrics. She calls people “roses” and claims she loves them equally.

Showing how she chooses to see the good in people and is willing to spread love and optimism. Compared to other songs about roses, this piece offers a point of view that should be shared in this divided world we live in.

Desert Rose is a timeless masterpiece that was inspired by the novel Dune. The song features Arabic vocals by the Algerian musician Cheb Mami.

According to Sting himself, the meaning of the song has to do with lost love and longing. Here the “desert rose” is a reference to a woman.

This particular song about a rose comes from Dropkick Murphys, the American Celtic punk band. In this song, the meaning of the rose tattoo is Ken Casey’s (the band’s bassist) tattoos.

This tattoo is a memorial to his grandfather, who raised Ken after his father died. The song talks about this experience and how much his grandfather means to the bassist.

Very rarely do roses get used in a way that serves as a warning, but Roger Waters nailed it by using the phrase “Wake up and smell the roses”. Couple that with a jazzy beat and somewhat dark and foreboding lyrics, making this song an exciting experience.

“Smell the roses” could also mean embracing a new day where you forget about what happened yesterday. Roger Waters wrote this song as a form of protesting against wars that are done for money and the disaster that they bring.

The “Rose of my heart” in this song symbolizes the woman that Johnny is singing about. This song has a country feel but would appeal to anyone who likes love songs with beautiful lyrics.

If you are looking for songs about roses to send to someone to express precisely how much they mean to you in case words fail you, this piece will not disappoint.

Last of the English Roses is not for everyone, but it certainly has an audience. Peter Doherty narrates a simpler time when he and his friends would have fun on a playground together.

The main topic, however, is about a crush on a girl he played with at the playground. The vocabulary isn’t easy to follow, but die-hard fans would have no trouble with this.

“Just remember in the winter / Far beneath the bitter snows / Lies the seed that with the sun’s love / In the spring becomes the rose”. This line at the end of the song sums it up beautifully.

The song encourages the audience to take chances so they may experience love or live life because, without a bit of risk, we cannot get what we want.

11. A Rose Is Still a Rose – Aretha Franklin

There is no doubt that Aretha Franklin is a juggernaut in the music industry, so it is no surprise that this song is a classic. From her vocals to the message of the song, everything is perfect.

In this song, Outkast talks about a girl called Caroline that has very good looks but a very petty and ugly personality when you “lean a little bit closer”. With roses, he means the beauty of the girl.

It delivers the message in a lighthearted tone through rap with some decent lyrics. The music video is also in keeping with the entire theme of the song, as it is funny.

Though roses are often described as beautiful, Linda warns the listener not to pick them because roses usually have thorns that could hurt someone.

This serves as a warning that even though love is a beautiful thing, you could still end up getting hurt. The song is characterized by simplicity, with the banjo being one of the only instruments accompanying it.

Kiss From A Rose is a song that I adore and it gained popularity for being used in the movie Batman Forever. Seal didn’t want to explain the meaning of his lyrics, only providing that some relationship inspired him.

He decided to let the listener form his interpretation and find his intention in the lyrics, which enabled this song to resonate with many people. It shows that a work of art could inspire different emotions depending on the listener.

La Vie En Rose word by word translates to “life in pink” in English. However, it means seeing life through rose-colored glasses, specifically when you are in love.

Édith Piaf proceeds to talk about a man she is in love with, how the simplest things he does make her fall even more in love with him, and how every day with him is a “life in pink”. Unsurprisingly, this song has had many iterations in English, most famously by Louis Armstrong.

The Chainsmokers are an American electronic Dj duo that has produced and composed a lot of hit music. Though this song doesn’t mention a rose in its lyrics, it gives an uplifting sound that inspires optimism and a general feeling of happiness.

It has the typical The Chainsmokers electronic beats that get your head bopping and feet tapping to it, I found its tunes very catchy.

Fresh Roses is a very sweet song by Juke Ross, who began his singer/songwriter career after he was inspired by John Mayer. Regarding the song, Juke has said the following:

“Like a Fresh Rose needs rain and nurturing so does new love. The song is about being caught in the space between trying to latch on to the bliss of new love while escaping the sting of the past.”

Black Roses Red is a sad song that she delivers in a beautiful voice. The black rose symbolizes decay and grief while transforming them to red would symbolize a change into a more optimistic and loving state.

The song describes a sad person who thinks that they may not find love at all but finally manages to find it and confesses to that love.

This is a heartwarming country song about a truck driver named Charlie, who is on his last drive and is heading home. He is thinking about his wife at home and how they will spend time together after he is done working, since he is retiring.

Stone Sour contemplates his relationships with his friends and is wary of them. He feels he cannot trust them and feels old and overused by those close to him.

The rose in this song is Teyana Taylor herself, and she compares her struggle to succeed to a rose growing through concrete. She talks about all the people who doubt her and ask why she hasn’t become “pop” yet.

She advises herself not to get caught up in other people’s opinions. This song inspires and encourages people to focus on their journey to success even though they have not made it yet.

There is no doubt that roses are beautiful and have inspired many songs from different genres, whether RnB, country, or rock. These songs about roses use the flower metaphorically or even literally.

They range from loving to sad to reproachful, and the artists pour their emotions into their pieces to create works of art. The rose has been romanticized for a long time and will continue to be used to deliver varying messages depending on the artist’s context.

To say that songs in this category have all been written and done would be a lie because as long as songs continue to be made and the rose is ever-beautiful, you can be confident that there will be more.