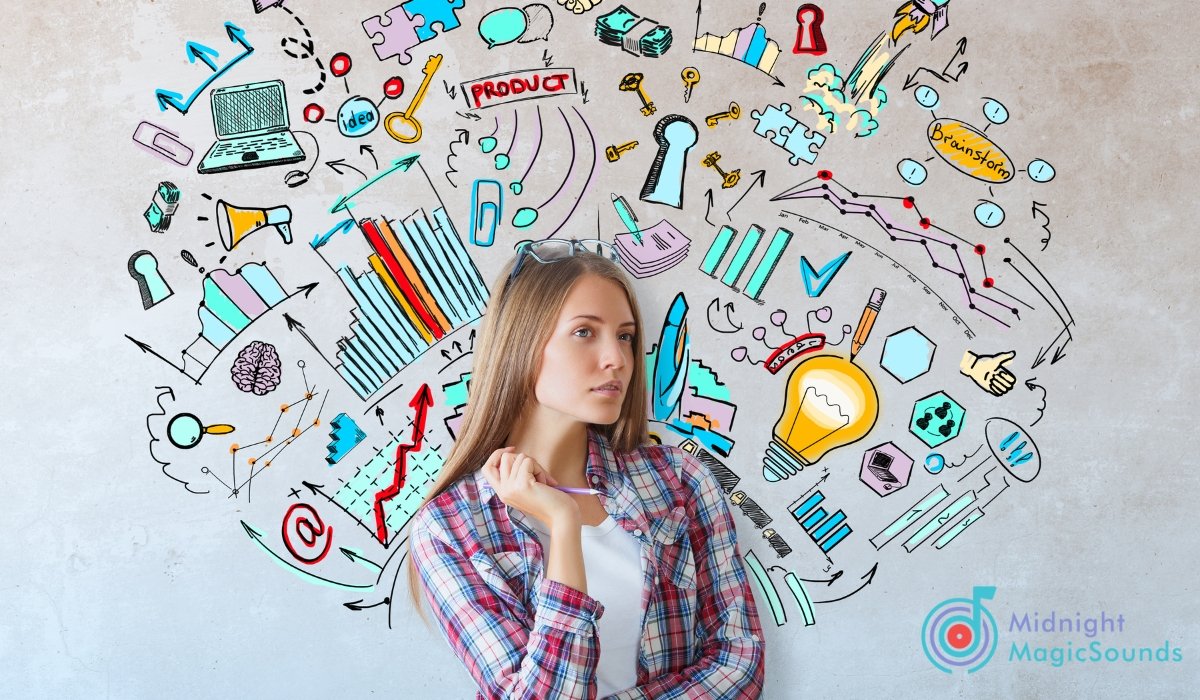 Having songs about creativity to listen to when you need inspiration is one of the ways I cope with writing. Creativity doesn’t always flow when you need it; these songs can get you out of that rut and into your creative mode.

That is why I have made this playlist to inspire you when you need it. Today we will look at various songs that applaud the variation of creativity across different people and genres.

The songs might inspire you to follow your imagination to see where it leads. Play these songs when you need that artistic push, and let them inspire you to continue with your creativity.

These are some of the best songs about creativity that I have come across.

“The Creativity Song” is perfect to start this list of songs about creativity as it tackles that topic in various ways. The song has some conspiracy surrounding it, with people finding different meanings.

The most common meaning derived from it is that it’s a jab at the current society limiting children’s imagination and creativity. It is an intriguing and quirky listen, and you might find new meaning, which is the whole point of the song.

Dream On by Aerosmith was released in 1973. This powerful ballad was part of the band’s debut album and their first major hit. This magnificent piece saved the band from being dropped by their record label, and it took Steven Tyler quite some time to compose it.

If you need a song to get your creative juices flowing, there is no better piece than this, as it will inspire you to achieve whatever you put your mind and heart into.

The bridge encourages you to dream on no matter what. If Steven Tyler didn’t abandon his dreams and ended up achieving success, neither should you.

3. Somewhere Over the Rainbow – Judy Garland

This ballad from the marvelous Wizard of Oz has been my song whenever I want to get lost in my imagination. Dorothy sings of a place over the rainbow where everything is better.

It is a kind of escape from the world we are in, and listening to it can help you reach for your creativity and expand your imagination.

This song was written by many Coldplay members, part of an album called Mylo Xyloto. Chris explained that the song is part of a story that gets tied together throughout the album.

It is a tale of two people who grew up separated in a big oppressive city. It focuses on the girl who, after being disappointed by the real world, tries to escape it in her dreams through her imagination.

“The Knitting Song” is a brilliant inclusion on this list of songs about creativity, as the whole song is full of it. The name, which is playful at the same time symbolic, is basically a love song.

She compares the warmth she gets from wearing a sweater she knitted to the warmth of sleeping next to someone. It’s like in order to make herself feel the warmth of someone else, she knits a sweater.

The calming tunes are perfect background noise to spur you on when trying to get in tune with your creativity.

Speaking of calming songs that can act as background music, “Where I’m From” is another favorite of mine. It has such a soothing beat, with the vocals bringing a sense of longing.

It is one of the best songs I listen to when writing or when I need to take a break. It feels like it massages my soul.

Queens of the Stone Age is a popular rock band that releases songs that are both soothing and can make you rock out. “Fairweather Friend” is the perfect song for metalheads when you need to get that kick to push you forward.

It’s a great listen for when you want to get out of that runt, the rock rhythms will push you to start working and open your creativity doors. There’s no way you won’t be inspired after listening to those guitar parts.

The song was initially written for the movie “Charlie and the Chocolate Factory.” The film is a classic, just like the song, for its encouraging message of imagination and creativity.

Jackie’s message in the song is that we should always dream big and, using our creativity, we can conquer anything. Look around, because anything around us can be the source of our creativity.

9. Everyday I Write The Book – Elvis Costello & The Attractions

Elvis Costello is a brilliant storyteller, and his abilities are illuminated in this song. The song was released in 1983, and it is a love story being told by Castello as he unravels his love life.

Every verse is a new chapter of his relationship as he describes their love story from the beginning. This song about creativity compares the romance that you show to the writing of a book, where you’re always supposed to be creative, patient, focused, etc.

Jim Morrison is a brilliant artist, and right before he died, he graced us with this masterpiece. The soft rain sounds that are heard in this moody classic just get me every time.

This song oozes creativity from the beginning to the very end. It shows itself in the lyrics that paint a clear mental picture of what he is talking about. The rain sounds and the brilliant delivery allow your mind to roam, and who knows, you might get a spark of creativity from that.

11. Runnin’ Down A Dream – Tom Petty And The Heartbreakers

Tom Petty is a Rock Hall Of Fame artist, and some may credit that to this song. He says he wrote the song after seeing Elvis Presley perform and got inspired to rock as hard as he does.

In the song, he refused to give up his dream of becoming a rock star. It resonates with me strongly as when I refuse to lose my creative edge, I listen to the song and keep going, and it might spark the same thoughts in you too.

12. If You Could Read My Mind – Gordon Lightfoot

When we think of songs about creativity, we find ourselves thinking of cheerful songs. Well, this one challenges that perception. It comes with pain, tears, and heavy emotions, showcasing emotions that get you every time.

It is the perfect song to play when you want your emotions to show through whatever you are doing, such as writing. It makes your artistry flow seamlessly, bringing your creativity to the forefront. We can see Gordon’s creativity in this tune where he compares various works of art to his divorce situation.

John Lennon made the song after he read a book by Robert Masters and Jean Houston called “Mind Games: The Guide to Inner Space.” The message is about how we can improve ourselves by tricking our own minds.

Sometimes our mind is the biggest hurdle, and if we can get ways to bypass the stubbornness of self-doubt, we will be more productive. Don’t let your mind block your creativity; you can beat it!

Gary Wright got his inspiration for this song from a Hindu monk when on a religious journey. The song is about a dream weaver who comes at night to take all your worries away, leaving room for creativity and imagination to take over.

We all get those days when we are filled with dread and wish for our own dream weaver to give us peace. This song can be that escape, unleashing our dreams.

“Imagine” by John Lennon might be the artist’s biggest song. Lennon got inspiration from Yoko Ono’s book “Grapefruit.” It has a strong stance on political matters, mainly speaking about how the world would be better if no one had personal possession, money, or anything materialistic.

You can use this song to encourage you to showcase your creativity, no matter how strong or unpopular your method is. The first step to a better world is imagining it, and I hope this tune sparks that light of creativity in you.

Al Stewart is a musical genius with excellent storytelling ability. When you get lucky to come across his work, you will not get enough of it. The song was released in 1972 but still stands the test of time, becoming timelessly brilliant.

It talks of an artist who is so creative they can make songs out of clay.

Leah Andreone delivers this love song to us, talking about how she dreams of a life with the person she loves. Her creativity captures our attention with her unique voice while taking us back to when we loved someone and how we wished they did the same.

Taking you out of your body and letting your mind roam is the whole point of songs about creativity, and this one will do just that, opening up avenues to let your creativity find its way in.

Aldo Nova challenged the norm of music production as he chose a different and creative way to go with this. He wrote the lyrics before having a vision of what their arrangement and the instruments would be.

“Fantasy” encourages us to take different creative directions, even when they go against the norm. You should not hide your idea just because people don’t do things the same way or won’t understand your vision.

There isn’t much to say about this song, but that is because it doesn’t have lyrics. “5:32 PM” is more of a mood and vibes song with a relaxing beat.

It is another great background song that acts as an ear massage. Playing it while working allows you to relax and not get distracted, letting you focus on showing your creativity.

This song is an encouragement if I ever saw one. While the lyrics aren’t necessarily about creativity, the overall song is about perseverance and believing in yourself.

There will be times when you question yourself and what you do, but you should not let that stop you. Don’t stop believing in yourself and your art; hold on to that feeling, and you will succeed.

What a great way to wrap up these songs about creativity. “What a Feeling” was made for the popular 80s movie Flashdance. It is a song that will get any dancer, singer, or anyone who wants to release their creativity.

The song shows how letting go (in this case, of your creativity) is such a wonderful and incomparable feeling, with Irene Cara encouraging us to make our passion happen. Oh, what a feeling indeed!

We all need a touch of creativity to add spice to our lives, and the list of songs about creativity will do exactly that for anyone. Creativity is a subjective thing, and we all perceive it differently.

With the list above, I tried to touch on every way we might see it. I hope the compilation I have for you today has helped you find a couple of new songs for your playlist.

I’m sure you will find some representation no matter what you are looking for, considering the songs come from different genres.