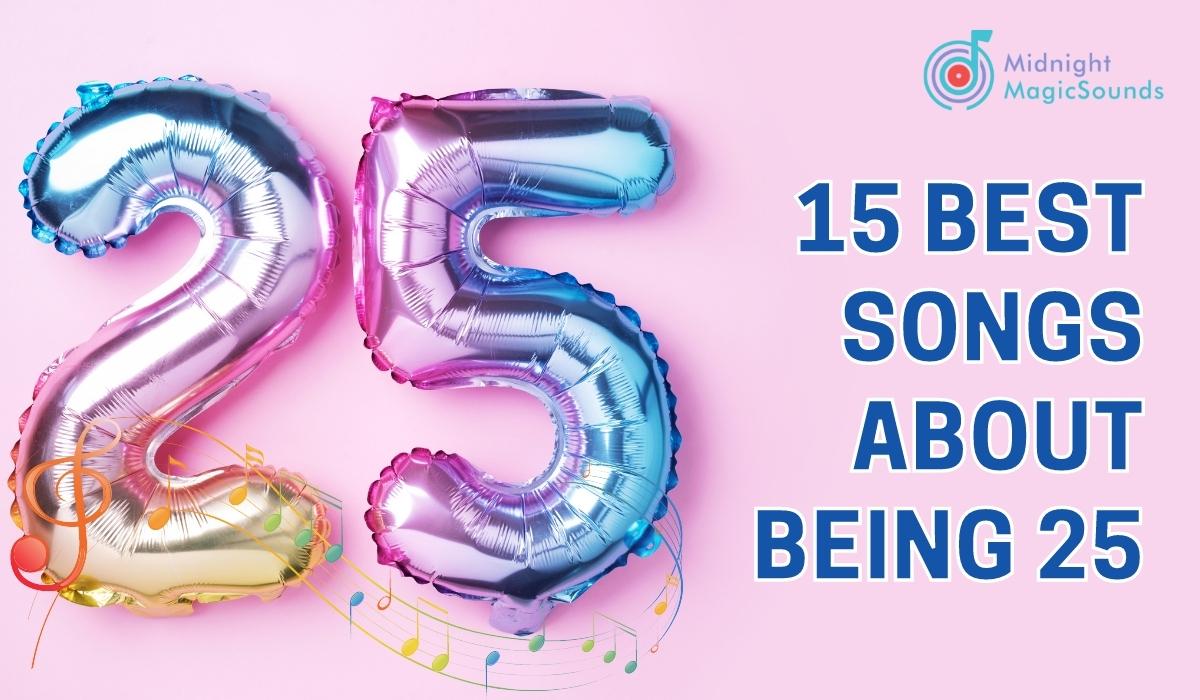 Have you turned 25 and looking for some musical inspiration? The quarter-life has its ups and downs, but the music never fails to make our journey a little bit worthwhile. At this point, songs about being 25 years old are surely great additions to your playlist.

Being two and a half decades old is both a blessing and somewhat a curse. It’s the midline between your raging 20s and the looming 30s. Being in between these two largely different phases of your life can be confusing and depressing.

It’s the age where you start to become the “bona fide adult” that society expects you to be. While it’s not easy, being 25 can also be fun if you decide to make it happen.

Such a time in your life deserves a perfect anthem. A few years from now, you’ll look back and listen to the same songs but with a different perspective. How cool is that, right?

So if you’re looking for the best song to be the theme song of your 25th year, the list below might nail it for you.

There’s no better way to bid 24 goodbye than singing one of your newest life anthems. Here are 15 songs about turning 25 and the challenges that come with it.

‘Birthday’ is a song from Empty Atlas’ 2020 album called ‘Kairos’. Through the lyrics, the band encourages 25-year-olds to enjoy their 20s despite losing friends and having the need to be patient.

While the band is yet to get their big break, this song is nothing short of comforting for those who recently turned 25. If you want easy listening, this might just be the song you’re looking for.

The song 25 by Pretty Reckless explores the life of lead singer Taylor Momsen growing up. In the song, she talks about specific stages of her life, including the age of 25. The song is both rebellious and dramatic, both in its lyrical and musical aspects.

Momsen wrote this song when she was 25 years old, making it even more relatable for the quarter lifers. It’s in a darker mood than other songs on this list, but it’s still worthy of a stream.

If you’re into rap, one of the best songs about being 25 that you might like is G Herbo’s Turning 25. In the song, he recounted the days he almost quit as well as the reality of violence at such an age.

While G Herbo isn’t as popular as other rappers, he makes a statement in this piece.

4. Through The Fire by Chi TheRealist.

Another rap piece that you might like is Through The Fire by Chi TheRealist. In the song, he talked about the losses and failures of prior years.

The lyrics take an uplifting turn as Chi TheRealist sings about getting back up and knowing that whatever’s lost can be replaced.

The Smith Street Band laments about the fears and struggles of turning 25 in a rock music fashion. Also, the manner of singing of the band is somewhat reminiscent of the style of the band ‘The Smiths.’

Nevertheless, their name came from Smith Street in Australia, where they are from.

If you want to rock on your 25th birthday, you might as well crank the volume up on this song.

6. In Love or Whatever by Future Teens.

Future Teens’ In Love or Whatever talk about the feeling of getting lost at the age of 25. The character in the song is struggling between finding love and figuring out what he wants to do in life. These are themes that most 20-somethings can surely relate to.

This is the fourth track on the band’s album ‘Hard Feelings’ released in 2017. It’s currently the most streamed song in their album on Spotify.

In ‘We Don’t Care,’ Kanye West (now goes by the name Ye) tells the reality of having to deal drugs to survive during your 20s. The song brags about not having care what the world says about being a drug dealer or a college dropout.

This song is the second track of Kanye’s ‘The College Dropout’ album, released in 2004.

Damaged Kids serve as an anthem to 20-somethings about being isolated from society. In the song, Broadside sang about being 25 and not having the courage to speak out. In the end, they left a question about whether we’re just recluses or damaged kids.

This song was released in 2015 as the ninth track of Broadside’s album ‘Old Bones’.

The angsty rock vibe of this song makes it a great choice for a head-banging 25th-year celebration.

‘Schoolin’ Life’ is from Queen B’s fourth studio album. It’s on the same album as the massive hits ‘Love on Top’ and ‘Run the World (Girls).’

The song talks about growing up and life in general. In the lyrics, Beyoncé dedicated the song to 20-somethings and how they should enjoy life before it slips off their hands.

Beyoncé’s recording engineer Jordan Young mentioned in an interview that this is his favorite song on the album.

11. Twenty-Somethings by Judah & The Lion.

This song is the fourth track on the album ‘Kids These Days’ released in 2014. This is one of the songs about being 25 that talks about how life comes rushing fast even if you’re not ready for it. The lyrics also included the reality of being broke and struggling in your 20s.

Overall, this song is simple in terms of lyricism, but it’s surely relatable for 25-year-olds.

While the song doesn’t necessarily mention the age of 25, the lyrics of ‘9 to 5’ is something every 25-year-old can relate to. It talks about being a working young adult, having ambition, and trying to survive while waiting for your turn to come.

Although it was released in the 1980s, ‘9 to 5’ remains a timeless classic, even for 25-year-olds of this generation. It’s a Dolly Parton song, after all.

If you’re looking for a bop to brighten up your 25th birthday, Icona Pop’s ‘All Night’ will not disappoint. It’s a banger that sings about the carefree and hopefulness of being young.

This song was released in 2013 and belongs to the same album as the smash hit ‘I Love It’, which shares the same boppy tune. It’s the second track of the album ‘This Is…ICONA POP’.

14. Forever Young by One Direction/Alphaville.

25 and feeling young as ever? Nothing is better than to sing it with One Direction’s ‘Forever Young’. It’s a modern rendition of the Alphaville classic, which made the song popular with youngsters. The original was released in 1984, and One Direction performed their cover shortly after placing third in X Factor back in 2010.

Try to listen to both and see which will appeal more to your musical taste.

SZA wrote ‘20 Something’ in her late 20s, where she poured her heart out about not having things figured out. She continued to echo the common struggles people experience in their 20s.

Moreover, this is the last track of SZA’s ‘Ctrl’ album. It joins the ranks of ‘Love Galore’, ‘Garden (Say It Like Dat)’, and ‘Drew Barrymore’. Overall, 20 Something is easy to listen to, thanks to SZA’s smooth voice.

We hope that you find these songs about being 25 relatable or enjoyable to listen to as you welcome another year. While turning 25 can be pretty daunting, always remember that it’s a blessing to be given another year to enjoy. Make sure that you make the most out of it in any way possible.

Don’t forget to add these to your playlist. After a few years, listen to it again and see how much of you has changed. Quarter life is challenging, but you should trust the process.

Do you have other songs about turning 25 that you want to share? Let us know in the comment section!