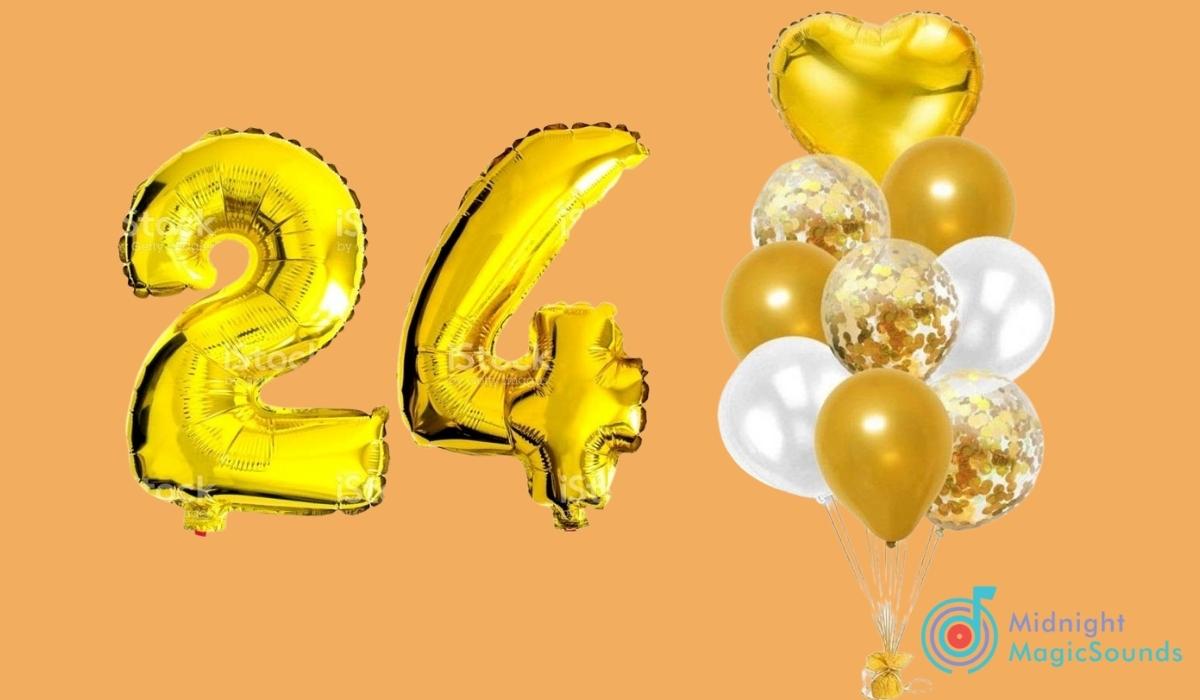 Growing old can be exciting, but it can also be scary. You constantly have many what-if questions that take your mind off celebrating your age.

However, did you know that there are songs composed about a certain age that can help calm down your anxieties? Well, if you’ve just turned twenty-four or are halfway through this year, we have created a list of the best music to listen to at this age.

These songs will help you celebrate and enjoy your 24 years. You can add them to your playlist and listen to them when you feel overwhelmed. That said, let us look at these compositions.

We have listed the best 15 songs about being 24, followed by the artist and why you should listen to the song in the below paragraph. We hope you enjoy and find them relatable.

The vocalist starts by explaining what the song is about. The song is written for a caretaker that lived on a ranch he bought. It compares the old man with the young man and comes to the conclusion that the old man was once just like the young one.

The exceptional vocals and profound words made this song an instant hit, reaching #31 on the Hot 100. Although it was released more than forty years ago, many people continue to love this composition. Neil was twenty-four when he composed this song.

Recommended: 15 Best Songs About Being 22.

This song is based on Jon Forman and was written when he turned 24 on his birthday. It talks about the past 24 years of Forman’s life.

Generally, it describes how much you can change your perspective in life and yourself from just a single event. Although it was released in 2003, many people still love it.

The track was released in 1992 in an album that became very popular once it was released. If you listen carefully to the lyrics, you will notice that it is a dark and troubled track.

The singer says that twenty-four is different from what he thought. The song has a gentle opening that sometimes feels like a struggle to keep it going. The vocalist doesn’t welcome this age. It almost feels like this song is a suicide note since he doesn’t see anything good with this age.

It’s not an easy song to listen to. But it describes the disappointments many people face as they get older. It stands out as an honest track representing the reality of things.

This fairly new song, released in October 2020, features some impressive pedigree. It was written and performed by Young Blue, a talented rapper, and later remixed by TRF Natu.

Natu talks about how his goals changed now that he was 24. It’s mainly about missing an ex-girlfriend whom he mistreated. Then he later realizes his mistakes and the bad things he did to try and get her back. This will be a great track to listen to if you love hip-hop.

Definitely one of the best songs about being 24.

Ice Cube released this song in 1992 in the album “The Predator.” Thirty years later, this song is popular and many people’s favorite. Although the singer is thankful for being alive, he worries that he might not see another 24 years due to his rough life.

He describes what according to him was a great day, and a person from Tumblr gathers the clues and finds the date of the day that Ice Cube meant, January 20, 1992. Ice Cube is talented and has a unique voice. It’s easy to see why his tracks quickly hit and made him famous.

No Hope describes growing up and getting older. It’s inspired by the struggles Justin Young passed through in his twenties. The track encourages people to be prepared to transition from teen to adulthood. Otherwise, their adult lives will be harder.

Many people can relate to this song as it talks about the reality of things. If you aren’t prepared for this transition, you will find it challenging to understand adulthood and make it through, especially in your twenties. The track was released in 2012 as part of the songs in the “Come of Age” album.

7. It Could Have Been a Brilliant Career – Belle & Sebastian

The most eye-catching thing about this song is the opening line. The vocalist says he had a stroke when he was only 24 years. Now, this line is enough to draw someone into the narrative.

The track was produced in the 1990s and is considered an indie-pop music genre. From the title, you can guess what this song is about. It describes what might happen should an unfortunate event happen to you.

In this case, the man suffers from a stroke that seems to steal his future. However, the writer paints a picture that even without the stroke, his career may not have gone too far. The main message is that life always throws curve balls despite our plans.

Speedboat was one of the hits that took the world by storm in 2019. It is featured in the ZUU album and talks about how difficult making it to 24 is when you live a dangerous lifestyle. Curry references XXXTentacion, who was murdered at only 21 years.

Curry says he needs to adopt a different life if he wants to go far. A unique thing about him is that he changes his style in every album. So you will get to enjoy new, better sounds from this talented rapper.

The song wants to sound closely like an Athens-style indie jangle genre. It starts slowly as instrumentals for 30 seconds, followed by deep, powerful lyrics that don’t last more than three minutes. Although the lyrics are opaque, the writer describes the crisis after college.

It paints the narrator as a young adult unsure of where he fits. He continues this theme until he finds his way and leaves his parents’ home. It was released in 1985 on the “Real Nighttime” album and quickly became popular.

This is another song, not necessarily about being 24, but rather about the experiences of a young adult in his 20s. Specifically, it is about hooking up with your ex.

Compared to most other hook-up-with-your-ex songs which are full of regrets, this one is written to be feel-good. It talks about the various experiences an adult goes through in this new phase of life.

This is one of the most popular songs by Blink-182, released in 1999. But, while it is an old song, and it is not exactly part of the songs about being 24, it’s still popular and depicts the realities of life. The vocalist sings about the tricky period of transitioning from a teenager to an adult.

The song was inspired by Mark Hoppus, the band’s lead singer. He says women often called him immature.

But he didn’t care what others thought of him as he had a don’t give a damn attitude. The video shows three trios running naked in the streets of Los Angeles, generating plenty of laughs along the way.

Recommended: 21 Best Songs About The One Who Got Away.

The song doesn’t mention a specific number. But it talks about the experience of living life in your twenties. Judah and the Lion are a rock band from Nashville, Tennessee, USA.

They make music of different genres, including pop, rock, and country. It is an easygoing track that is built gently. The lyrics and the overall music fuse pull listeners together without them knowing.

It talks about living in your twenties when you don’t have any commitments but still want to find your way. And it’s relatable to many people since although they wish to continue having fun, they still want to settle into a moderate way of living.

In 2017, Dave produced a song called My 19th Birthday that talked about his experiences and successes during his 19 years of age. Years later, Dave wrote the song “My 24th Birthday”, one of the iconic songs about being 24, to follow up on the previous one.

He uses this opportunity to describe where he currently is in his life. The song consists of stories that are from Dave’s life.

When we transition into adulthood, many of us start missing our childhood days when things were simple and didn’t care about anything. However, now we are adults, we begin to see how challenging life is, and we have constant battles in our heads.

This nostalgic feeling is what AJR talks about in this song. It talks about the childhood days instead of focusing on a young adult and struggling to live behind the innocent, naïve life you once lived. Unfortunately, you can’t go back to this stage which leaves you empty and heavy.

Lastly, we have this song about salvation and redemption. It talks about where Josh and Tyler, members of the Twenty One Pilots group, come from in the life of darkness, depression, and sin they used to live in.

The track describes how they switch towns to move to another better place. It is generally about forsaking your hometown and moving into another field with hope and better days.

These are just some songs about being 24 you can listen to when you turn that age. There are many that couldn’t fit on this list. But, we hope that you can find them relatable and enjoyable once you listen to them.

We’ve only given you fifteen examples as a head start. So have fun, and we hope the tracks will fill you with hope and enthusiasm for the future.