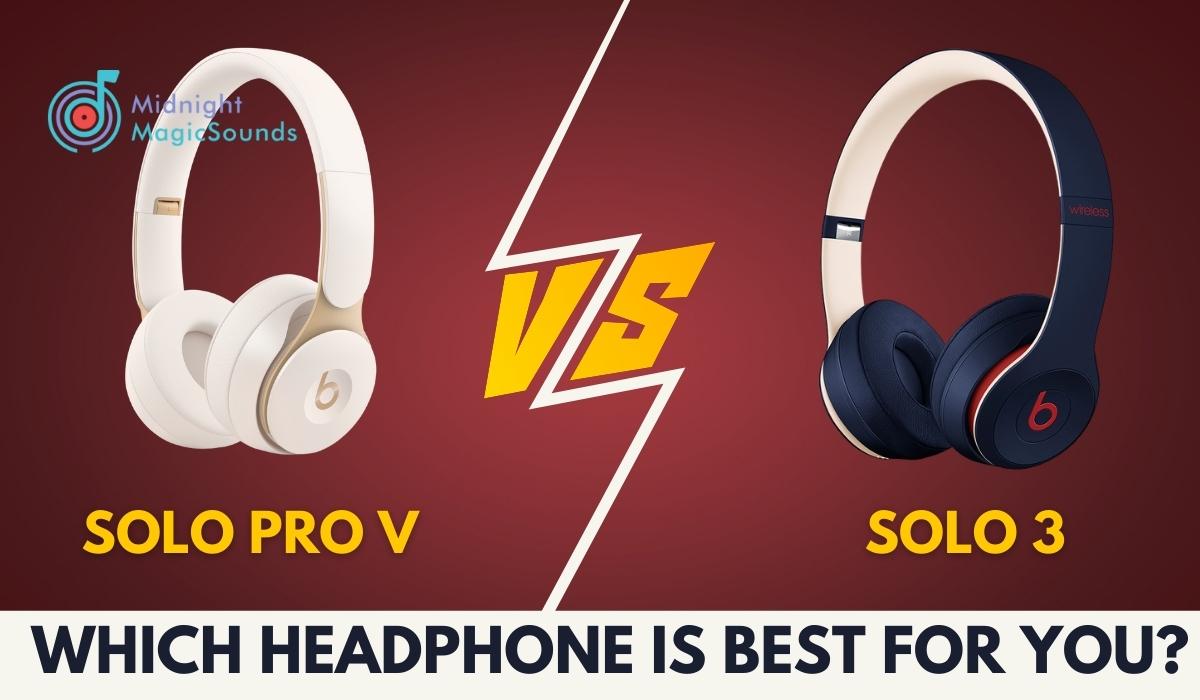 The search for a good pair of headphones can get kind of irritating thanks to a couple of things, cost and function. If those two main elements can be handled then it comes down to a matter of personal taste.

When thinking about the best headphones for the money, Beats Solo Pro vs. Solo 3 is kind of a tough decision to make. Having used both of them, I can tell you that they’re both pretty good, but the Beats Solo Pro is a slight upgrade that should be given a chance.

There are plenty of reasons why this makes sense, but personal taste and the different performance qualities of each headset tend to be the reason why a lot of people lean one way or the other.

To be honest, trying to pick between these two headsets is difficult since they have a lot of the same attributes and there are only a few differences that separate them.

With that being said, the Beats Solo Pro does edge out the Beats Solo 3 in a few areas that are kind of important. It’s all a matter of what one needs and/or wants when it comes to their headset. 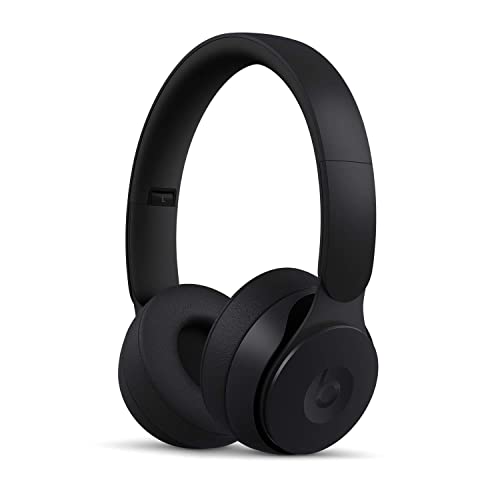 There are those folks that are bound to say that headphones are headphones and there’s not that much difference between them. But those that care about the quality of the music they’re listening to will understand why quality matters.

The whole debate of Beats Solo 3 vs. Solo Pro probably sounds silly to a few people, but there are several elements that go into the decision to use one headset or the other.

After all, when a pair of headphones craps out on you in the middle of a song or right before you need them, a lot of people are content to buy whatever cheap piece of plastic they can find.

But the customers that want the best need to know why they should pick one product over another. Here are a few elements to think about when you’re selecting your headset.

As far as the design goes, a lot of people don’t tend to care that much so long as the speakers stay where they’re supposed to. But as far as the build sits, the Beats Solo 3 is a little more versatile when it comes to fitting one head or another.

While the Beats Solo Pro does fit a little more snugly, it doesn’t always allow for the same type of comfort that the graceful curve of the Solo 3 can provide. In this case, it’s all a matter of comfort since some folks don’t really care that much when it comes to how the speakers fit over their ears. For the money spent though it does pay to keep the customer happy by keeping them comfortable.

Recommended: The 5 Best Surround Sound Headphones Money Can Buy in 2022.

This is where the Beats Pro Solo excels over the Solo 3 since the quality given by those slightly larger earpieces tends to help a little bit when it comes to delivering the type of quality sound that people want.

It does stand to reason that the Solo 3 is still a quality headset, but in terms of maintaining sound quality, the Solo Pro takes the cake on this one and makes it possible for the customer to experience the maximum amount of enjoyment.

When using the Solo 3 out while riding in the countryside, the quality dipped just a bit. When taking the Solo Pro it was easier to enjoy my music and get into the experience.

There are several factors that affect sound quality, but in this instance, it’s fair to say that the Solo Pro is just a little better than the Solo 3 and let the argument drop.

Trying to pin down a favorite using the Beats Solo Pro vs. Solo 3 argument, in this case, isn’t really that easy either. A lot of us know that having a lighter headset can be better, but it can also be kind of a pain in the butt.

Lighter headsets might not stay on as well, while heavier headsets are often a bit cumbersome and hard to deal with. In this instance, there isn’t really a winner since both headsets are pretty comfortable since they conform in their own ways to the skull.

I would still be likely to pick the Solo Pro. When one looks at it, 52 grams might sound like a lot in some cases, but the headsets are roughly half a pound each, give or take several grams in either direction.

The point is that they’re not that heavy and that picking between them using weight as a measure isn’t the best choice. Some might want to argue with this, but the fact is that the weight is negligible for most people when it comes to this product, which is a bonus for both headsets.

Depending on where you’re at when you’re using these headsets you might want to think twice about the level of noise cancelation they offer since from a safety standpoint it could be of great importance.

Amazingly, despite the great sound quality, the Solo 3 kind of lags behind the Solo Pro when it comes to noise cancelation. When you’re working out or going for a bike ride with the Solo 3 headset, which I’ve done, along with just sitting in the office trying to get some work done, it’s usually necessary to block everything out to be productive some days.

The Solo Pro manages to cancel out just about everything else, but it obviously won’t have that strange quality that’s seen in the movies when someone is wearing a quality headset and can’t hear loud noises right next to them or within the vicinity.

When using these headphones to block out pretty much anything else though it’s great since they do manage to eliminate the noises that you don’t want to hear while letting you listen to the music you actually want to hear.

You don’t want to buy headphones that are a pain in the butt to use, since having to adjust them and find the sweet spot on your head constantly is plain irritating.

My personal experience with the Solo Pro is that the headset is best used when seated at a PC while gaming or working since the wireless option can make both headsets ideal for use when sitting around.

But coupled with its other benefits, the debate of Beats Solo 3 vs. Solo Pro kind favors the Solo Pro in this case since it’s a little easier to slip them on and off and find that aforementioned sweet spot that offers maximum comfort while maintaining sound quality and overall comfort.

Both headsets can go a long way to claiming the title of being the best when it comes to how easy they are to use. This is kind of a matter of personal taste since what works for one person won’t work for another. But when all is said and done I do like the way the Solo Pro sits on my head and as a result, it’s a little easier to deal with than the Solo 3.

The Solo Pro has a lot more interesting features to it such as voice commands, voice prompts, and other bonuses that the Solo 3 is lacking. For that reason, I definitely like the overall usefulness of the Solo Pro since it gives more bang for the buck, as the saying goes.

Some folks don’t care about all that, and that’s fine, which means that the Solo 3 would work just as well. When you look at it, the Solo Pro only costs about 10 more dollars and the quality is a lot better for the money since you’re getting a superior product.

It might be tough to convince some people of this since as was mentioned above, a lot of people think that headphones are headphones. Folks that are all about getting the best quality will want to pay attention though since the Solo Pro is the headset you want if you like the extras and want to listen to your music in style.

Overall Performance for the Price

I feel that I can’t stress enough that the Solo Pro is the headset that you want for maximum performance.

Recommended: The 10 Best Studio Headphones for Gaming in 2022.

Plus, the added options that the Solo Pro comes with are hard to get past since the truth is that having more options is usually what makes for a better listening experience, and that’s hard to argue with. I can only speak for myself, but if you’re wanting a solid headset then you’re going to want to go with the Solo Pro overall.

Headphones are kind of a simple thing for a lot of people to buy since quite a few folks will look for comfort and ease of use over anything else. It’s only when people realize that a headset doesn’t give them the quality sound, they want that they might think otherwise.

The Beats Solo Pro vs. Solo 3 debate is one that some folks might not understand that well until they’re given the chance to experience both headsets.

In my experience, the Solo Pro is the way to go, but the Solo 3 is almost as good. It’s definitely too expensive to try them both out, but it’s smart to take the advice of people that have used them right out of the box. 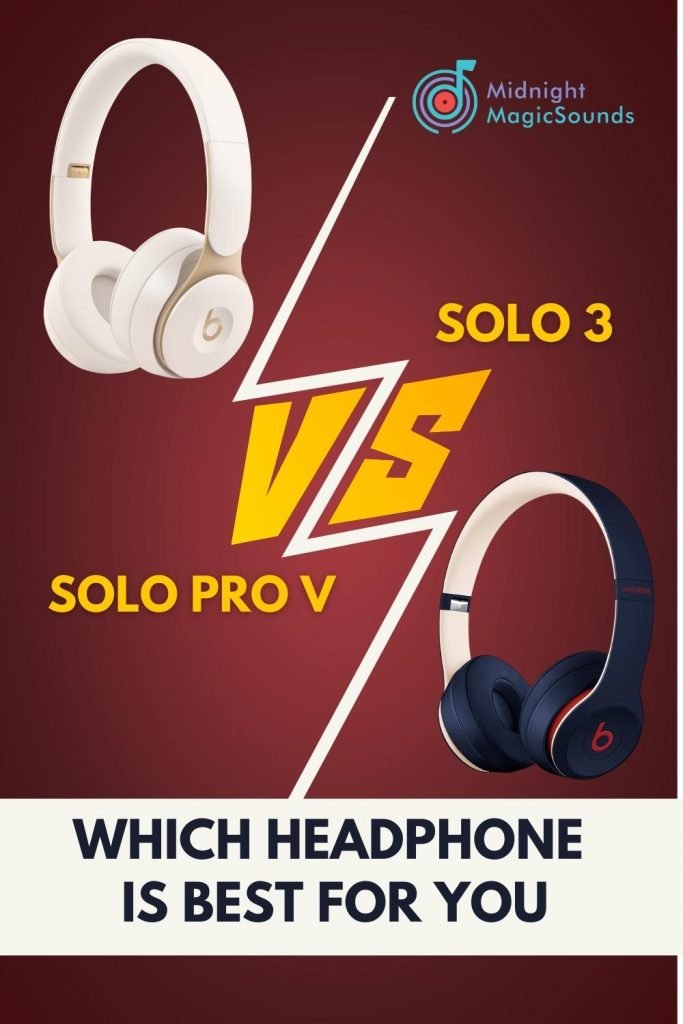