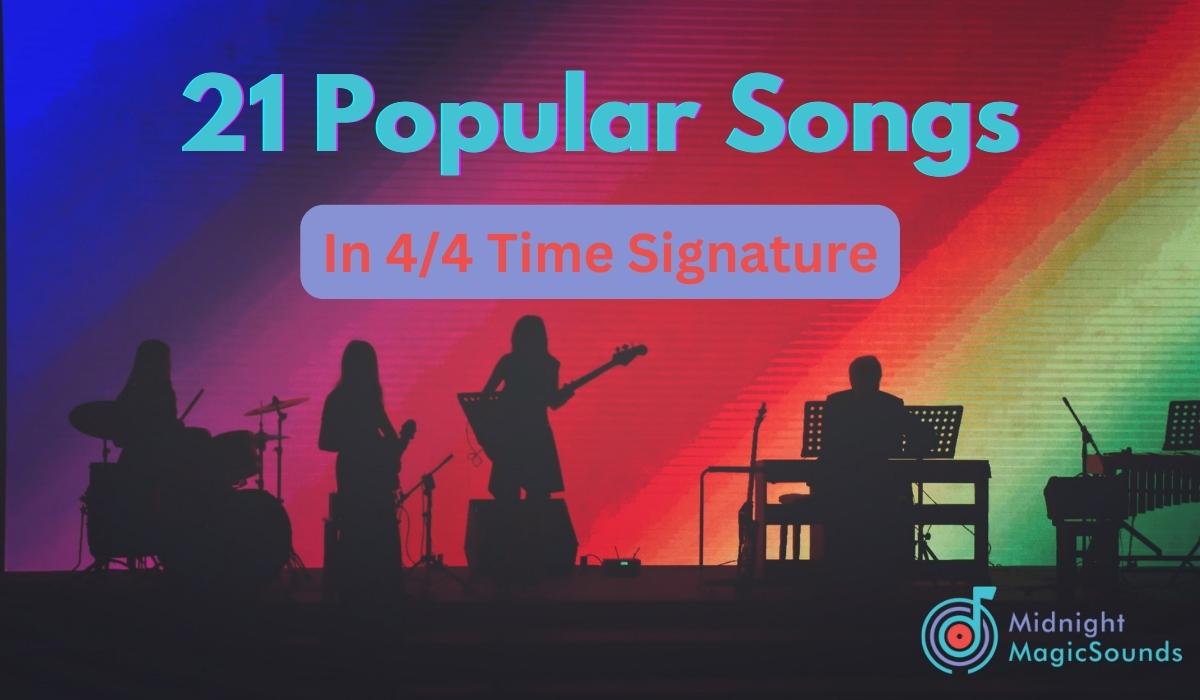 As you already know, songs in 4/4 time signature are some of the most popular worldwide. This is because the time signature provides a more stable rhythm than others. Most music enthusiasts call it the common line because of its frequency in multiple genres.

If you are analyzing music to learn, you will notice an interesting and familiar melody line latching an exciting beat and rhythm. To master and know the common songs in 4/4, you will need to listen to beats with quarter notes per measure.

If you are looking for music played in 4/4, this is the right sport for you. Because the beat is mesmerizing, you will witness it in many mainstream pieces that you already sing along to. Today I am sharing 21 popular songs across all genres with this signature.

A 4/4 time signature is very common in complex and easy-to-play songs. The songs in this signature are catchy; perhaps you will learn more about music with these songs. They Include:

The first song on our list is the classic song “We Will Rock You” by Queen. The song became popular on its release because of its ease of mastering and singing.

The song is accompanied by a heavy upbeat rock sound that makes it memorable. Even with the lack of instrumental and melodies, the beat can easily be recreated with claps.

I believe the open guitar riff of this song is popular with anyone who is a fan of the reggae genre. The classic from Bob Marley has a slower and laid-back feel than most familiar songs in 4/4 time signature.

The message from the song made it famous globally, making the song spread like wildfire. This is because we all need peace and love in our lives, making it stay popular decades after its release.

Released in 2014, this slow, heartfelt song is one of the most memorable songs from the global sensation exceeding over a billion streams on YouTube alone. The song video is nostalgic and has aged gracefully.

It shows the journey of the pop icon from his birth, playing on the streets and now filling stadiums and arenas. It will amaze you how far Ed Sheeran has come and the milestones he keeps achieving.

The piece is more controversial in multiple ways. The lyrics describe a man trying to seduce a woman at a club. The lyrics are explicit and caused quite a stir at the time of its release in 2013.

The subsequent controversy came about the composers sampling other artists’ styles without consent. Though there were multiple issues surrounding the song, I believe they were a catalyst in making it more widespread.

The Piece from Elvis is one of the best romantic songs in 4/4 time signature. Suppose you are looking for a song to dedicate to your partner to express yourself romantically. Presley’s voice is heavenly on this piece and any song he has ever composed. The song is about falling in love and not being able to control it.

Highway to Hell is the band’s breakthrough song that made them famous. The piece starts with memorable guitar riffs that cement its popularity in rock history.

Though it has been over 4 decades since the song’s release, there have been multiple covers, and even music teachers are basing the guitar riff as a lesson in most of their advanced classes.

Back when disco music was popular, you wouldn’t miss hearing the song at every entertainment joint. They released the song in the 70s on the band’s album named “Saturday Night Fever.”

Bee Gees wrote this catch and spunky song with a 4/4 rhythm, making them disco royalty. Though it has been decades since they released it, and the disco genre is fading, the piece is definitely staying alive!

Recommended: 21 Friends To Lovers Songs That Will Make Your Heart Sing.

This is one of the most popular songs in 4/4 time signature because the piece appeals to fans of all age groups and musical tastes.

When the song was released, it became almost every best track on most charts. The most memorable part of the song is definitely the guitar riff.

The Lazy Song from Bruno Mars is also composed in a 4/4 time signature. It is one of his popular hits surpassing over 2 billion views on YouTube alone.

The funky, upbeat song is perfect for relaxation as it glorifies taking time off from life’s stresses. The song’s video is equally lovely and will put a smile on your face or get you on your feet to dance.

10. All About That Bass – Meghan Trainor

Meghan released this debut single in 2014, and still a popular song that we get to enjoy. Since its release, the song has been number one on the charts of over 50 countries.

I later learned the song is not all about having fun but an inspiration to be confident even when struggling. It is easy for beginner song composers to master the piece as it has an easy chord progression.

This is one of the most groundbreaking songs in 4/4 time signature, and its success was because of its target market, which was teenagers.

The song made Carly get nominated for the Grammy twice. The artist achieved the milestone of becoming the first female to reach number one on chats as a debut artist in two and a half years.

The Classics from The Beatles have catchy and simple melodies. The lyrics of the songs are also easy to sing along to. The song has the most uncomplicated lyrics that have depth and meaning.

The song always gets me emotional every time I listen to it. It is impressive as the singer displays his vocal prowess by recording the song’s lack of auto-tune, which is common with current popular musicians.

Surpassing the over 2 billion mark on YouTube alone, this song cements itself as one of the best songs from Adele. The song never ages, no matter how many times you listen.

The song is about trying to move on after a breakup, and you will feel the emotions in Adele’s powerful voice. I believe the artist has the power to make an audience feel emotions by listening to her voice only.

This song is for you if you are looking for a feel-good tune with an upbeat tempo. We never see so many songs about brotherhood, and this song broke the norm and became viral.

The song lyrics talk about sticking through thick and thin with those you care for. The lyrics are deep and definitely stole our hearts.

The song is perhaps one of the most streamed songs in 4/4 time signatures across multiple platforms. In this song, Bruno and Mark brought the disco era to life by modernizing it.

The song has gained over 4.6 billion views on YouTube, and it keeps on rising even after years of its release. The song is a bop as it will get you on your feet to feel the rhythm.

Recommended: 21 Popular Songs About Being Tired.

The song from Justin is about self-love and moving on. The song was released in 2015 on his album “Purpose”. If you were a fan of the artist’s music, you would notice his progression over the years.

This song shows his growth and flexibility in adapting to new sounds. There have been multiple song covers on this piece showing appreciation for this magnificent piece.

Firework by Katy Perry is undeniably her best song out of all she has composed. The song is inspiring and can be your big motivator whenever you feel overwhelmed with sadness.

Every time I listen to the song no longer gives me joy alone but also nostalgia. I am always grateful for the artist’s composition of this feel-good song.

The Thriller album from Michael is definitely the best of his work. There are many songs in 4/4 time signature in the album, but none beats this song.

The genre of the song is rock and has memorable guitar riffs from legendary Eddie Van Halen. The song never gets old, and if you are new to Michael Jackson’s music, you will be in love and understand why he is the king of pop.

19. You Belong with Me – Taylor Swift

Regarding uniqueness and remarkable music compositions, Taylor Swift’s name has to be on the top list of artists that achieve this.

This song’s inspiration came out of the most peculiar places as it came about her hearing her male friend fighting with his lover over the phone. The tempo of the song is moderate and has pop and country elements.

“Ride” is one of the songs in 4/4 time signature that can’t be easily categorized in a particular genre. When analyzing the song’s sound, you will find it contains pop, punk, electro, and many more elements.

The song is so popular and featured as a soundtrack of popular video games we play, showing its acceptance even in the gaming industry.

The song that will conclude our list is the classic song by Ben E King. “Stand By Me.” It is a timeless classic released in 1961, and there have been multiple covers of the song by famous artists such as John Lennon.

Karen Gibson performed this piece at the Royal Wedding of Prince Harry and Meghan, amplifying the message of love despite harrowing challenges.

I hope you incorporate these songs in 4/4 time signature to be part of your playlist to enjoy listening to and playing. When you are learning the fundamentals of music, I recommend learning the rules of creating this common line as you will stumble upon it in multiple songs in all genres.

These songs are perfect for any occasion and mood, whether you want to relax, work out or want today. If you are a fan of listening to classics or even modern pop, there is a song for you to enjoy and sing along to.