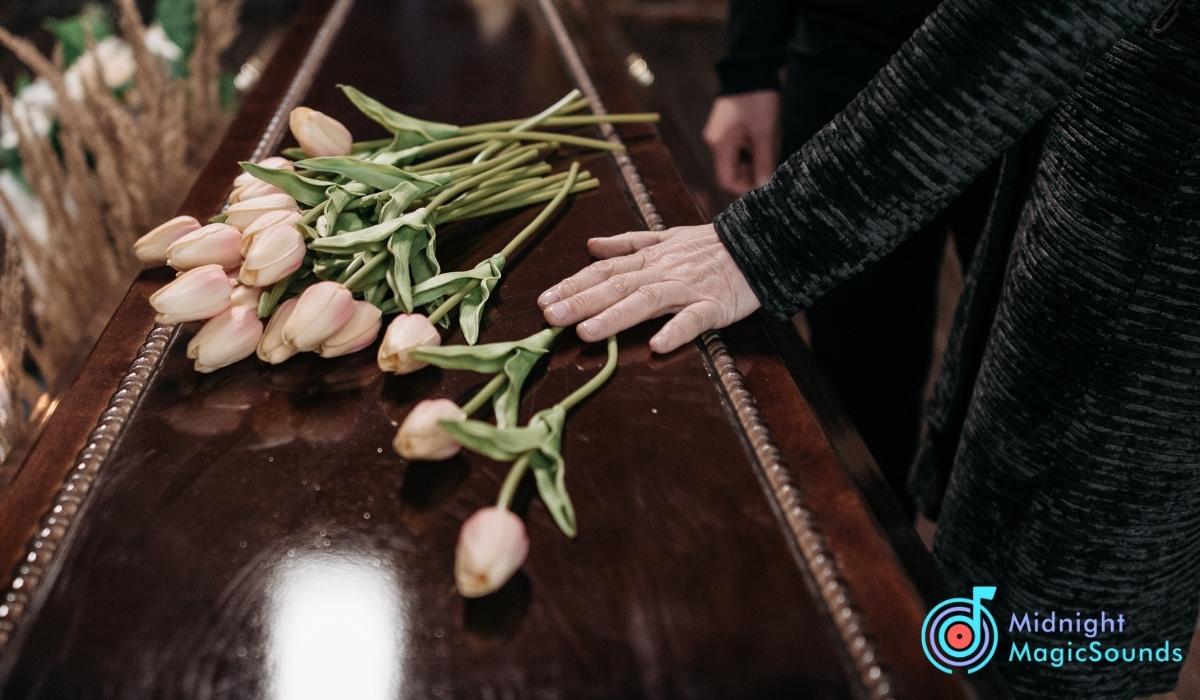 Listening to sad songs about people dying is a great way to get you through those tough and unimaginable painful times. Music has been proven to give people peace even during dark times.

Through the power of music, I can link my memories of lost loved ones and remind myself that I am not alone. When we lose someone we love, we understandably all feel like crawling into a ball and not doing anything for days.

Still, life is a short and beautiful journey that we all go through, and I found listening to songs helpful. Music is a perfect way to remind us that life might be short but excellent and should be celebrated even when it ends.

Artists have a gift for making these songs about loss that speak to someone about what they are going through and comfort them. This is immensely important in these times as they help you process your emotions healthily and beautifully.

This is a compilation of sad songs to help someone cope with their loss. So grab a box of tissues and be ready to embrace your emotions.

We go to this timeless piece of art, probably the most famous on the list for its role in the classic and heartbreaking movie “Titanic.” The film is about the protagonist facing the death of her love.

She suffers from the loss, but the song perfectly reminds us that love carries on beyond death. The song is from the legendary Celine Dion, who carries you through the protagonist’s pain.

2. Wake Me Up When September Ends – Green Day

This song about people dying is a perfect song to remind us it’s okay that we are hurting and we should embrace the pain. The lead singer of Green Day, Billie Joe Armstrong, wrote this song about his father, who died of cancer after a tough fight for a while.

Because this song is so personal, you can feel the songwriter’s pain, which helps anyone going through the same to relate.

One of the tragic themes behind James Taylor’s song is the death of his friend, Susanne, who had committed suicide.

Eric Clapton wrote this song about his four-year-old son who tragically fell out of a 54-story apartment. Eric Clapton experienced great amounts of pain and felt guilty as well.

It was a dark period overall in his life as he lost a lot of people during a 7-month span like a friend, his manager, and two associates.

Beloved is one of the most popular songs about people dying that address the loss of a grandparent. The song perfectly embodies the importance of family and how it is hard when the bonds are temporarily broken by death.

This is a perfect song for people in the same situation and helps them feel like they are not alone.

“One More Day” teaches us how precious life is, and we should enjoy and embrace every day we are with our loved ones because life is short.

It is one of the perfect songs about lost partners that will remind you to treasure and cherish the people you love in life.

7. Gone Away – The Offspring

The lead singer of the band wrote this song after a real-life event where a gang opened fire at a Baskin-Robbins ice cream shop. Even though nobody was harmed in that event, it was enough to inspire Dexter to write a song about it.

It is an emotional song that tells us that even though heaven is far away, we can die at any time, and that life is precious. Many people wrote letters to Dexter about the song as it helped them deal with the loss of a loved one.

You can hear the pain in Avril’s voice as she says she misses her grandfather and will never forget him while wishing he was still there with her. Avril was very close with her grandfather.

She perfectly describes how much she regrets not saying goodbye to a lost loved one. This is something anyone who has ever gone through the pain of losing someone can relate to perfectly.

When it comes to sad songs about people dying, we must include this all-time classic on the list. This song is about the misery of dying young and is written from the perspective of a young woman who passed away.

She also talks about how people ignored her up until she passed and that she never got to experience true love.

The piece shows us that no matter what happens between families, it will still be hard and painful when they leave us. Christina regretted not having been able to apologize to him when he was still alive.

This a beautiful song about the lead singer’s mother dying. This piece is different because it is mostly about showing the beauty of life and how we should look at death as a loss and honor our loved ones by celebrating them.

Though it is easier said than done, we should learn to celebrate their life and not get caught up in the loss we face.

12. Roses For The Dead – Funeral for a Friend

Matt Davies wrote this song after the death of his beloved friend. He said he could not cry, so he wrote his emotions down.

Some of us going through the same pain can understand this, in that sometimes we get so emotional and angry about the loss and grief we feel, making it impossible to cry. He wrote his feelings down, and you can feel it through the song.

Evanescence lead singer Amy Lee sings this emotional song about grieving the death of someone you love. The song title hints at memories that will never be forgotten.

This song about people dying has everything: emotional lyrics and powerful vocals, and great instrumental, and it gets me every time I listen to it. Anyone who can find peace and listen to it to connect emotional memories to it every time.

14. Everybody Lost Somebody – Bleachers

This is an emotional song about the tragedy of someone you love dying young, but it also reminds you that everyone goes through the hurt and pain of losing someone special to them.

Anyone missing someone who passed can listen to this timeless classic and find peace in knowing they are not alone. The song makes references to two tragic events: the death of Jack’s sister from cancer and the 9/11 terrorist attacks.

This is a well-known, beautifully emotional song about losing a beloved friend. They originally dedicated it to the late Paul Walker when he tragically passed away in a car crash.

Charlie Puth and Wiz Khalifa were entrusted with the honor of making a beautiful song to express the importance of friendship and how death is not the end of it. It talks about how the grieving friend will meet the friend in the afterlife.

Beyoncé wrote this song after a miscarriage in dedication to her daughter, Blue Ivy. Even though most songs about people dying talk about close ones that lived with us and passed away, they can also talk about tragic events like this.

Elton John wrote this classic piece for his beloved friend John Lennon who was shot to death by one of his deranged fans. Elton was good friends with John Lennon, making this song even more emotional.

John lived his life to the fullest and had a great contribution to friends, family, friends, and the music industry.

18. One Hell Of An Amen – Brantley Gilbert

This song honors a soldier’s death, and it is a true story written by Brantley Gilbert. He was one of Brantley’s closest friends and was even considered a brother.

“One Hell of an Amen” is about the perseverance and determination of the soldier; the song talks about how much everyone he left behind is so proud of him and can’t wait until they meet again.

19. This Is Your Song – Ronan Keating

Ronan Keating went through the heartbreak of losing his mother and was in a dark place when it happened and didn’t want to write this song but was convinced by his band members.

This song resonates with anyone who has lost a close loved one and is a very emotional song. Ronan Keating brings the pain of grief beautifully in this song.

Death is inevitable in everyone’s life, and this song tells us precisely that. The narrator in this song gives instructions to his loved one to prepare for his impending death and that they should be at peace with it.

Bob Dylan is an icon in the music industry and releases classics like this all the time; he knows how to make a sad song like this.

What better way to finish this list if not with one of the best song writer’s this generation has ever seen? I found this among the best songs about people dying.

He talks about his grandmother’s positive impact on him and how he wishes to bring the world light as she did when she was alive and calls her an angel.

When you go through the traumatic experience of losing a beloved one, it is heartbreaking and feels like you are alone, but listening to songs about people dying has brought me peace of mind knowing I am not alone.

When you have musicians who know how to bring the hurt into words in ways you cannot, it can be helpful. These songs can help you embrace the pain, learn to live with it, and eventually have a sense of peace.