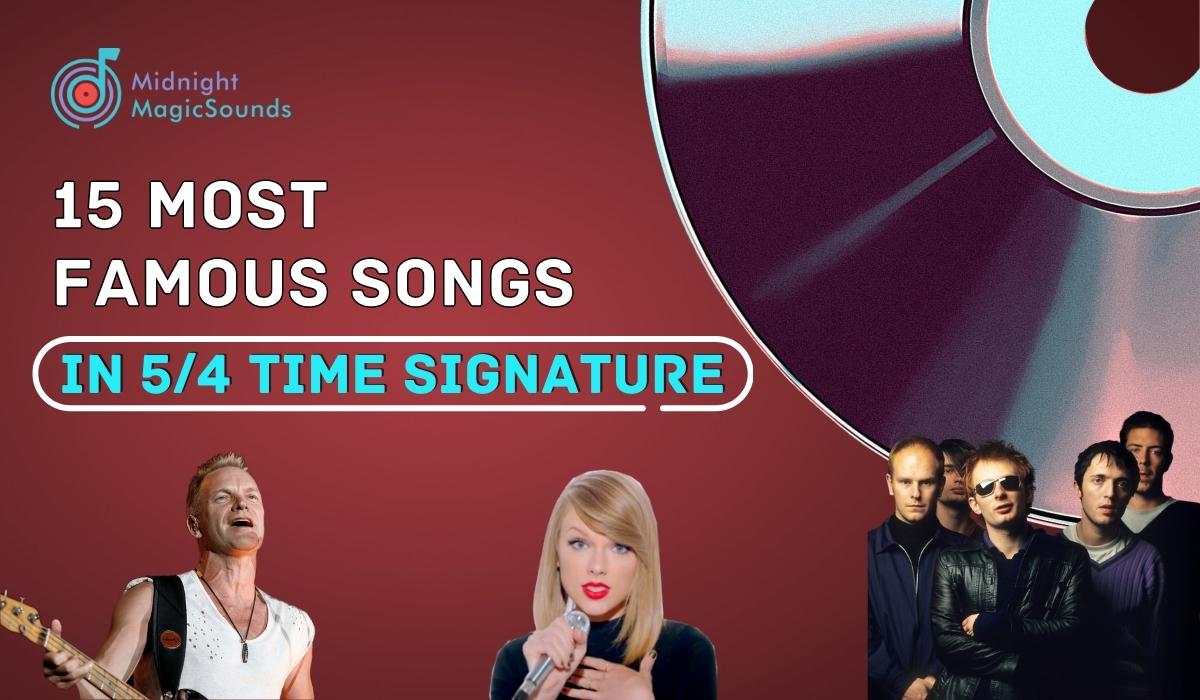 Behind every song that we listen to is the technical aspect of time signature. In layman’s terms, the time signature is the rhythm or beat that the song follows. It’s written in a fraction format like ¾, 4/4, 5/4, and so on.

One of the most unusual time signatures you may encounter is 5/4. And while it’s not an easy rhythm, there are actually many popular songs in 5/4 time signature.

Even if you’re not well-versed with the technical aspect of music, you can easily spot signs of a 5/4 rhythm. Many describe this time signature as ‘slightly odd’ or having that unusually off-beat feel.

Throughout the history of modern music, there are dozens of songs featuring the 5/4 time signature. You’ll be surprised that some of the latest and famous songs you listen to actually use this meter.

Below, we listed 15 of the most famous songs that use a 5/4 beat. See how many and which you actually know. And if there are other 5/4 songs that you want to add, don’t hesitate to drop them in the comment section.

What is a 5/4 Time Signature

A 5/4 time signature consists of five quarter notes in one measure, this is the 5 and 4 numbers. A measure is also called a bar since it’s separated by bars on the music sheet.

Meanwhile, a quarter note represents one beat. With that, a 5/4 time signature has five beats in it, which then becomes the rhythm of the song.

Overall, the 5/4 time signature is regarded as the most irregular beat. Despite that, it’s catchy and guaranteed to be attention-grabbing, even for those who aren’t familiar with time signatures.

Beginner musicians will surely find the 5/4 time signature challenging due to its off-kilter feel. But with practice, this time signature will become effortless.

15 Most Famous Songs in 5/4 Time Signature

If there’s one song notable for a 5/4 time signature, it would be the classic Take Five by Dave Brubeck. It was written by saxophonist Paul Desmond and is one of the first famous jazz songs to have taken a different path than the usual 4/4 or ¾ rhythm.

While it’s a classic jazz song, Take Five gained pop attention after being used in Hollywood movies like Constantine and Mighty Aphrodite to name a few.

As the title of the track indicates, 5/4 by Gorillaz is one of the songs in 5/4 time signature. It’s actually a polymetric song as the guitar is in 5/4 while the rest of the instruments follow a standard 4/4 rhythm.

This song was released in 2001 as the second track on the self-entitled album of the group. Initially, it was meant to be a single with a music video, but the group decided to replace it with another song called ’19-2000’.

3. tolerate it by Taylor Swift.

Taylor Swift’s track ‘tolerate it’ from the ‘evermore’ album is also written in 5/4 time signature. In this song, Swift tells a story of indifference between two lovers.

It’s one of the few latest songs to have such an intricate meter. Released in 2020, the entire album where this song belongs gained international acclaim. This is in the midst of Swift’s rift with Scott Borchetta, founder of her former label, Big Machine.

Recommended: 15 Best Songs About Being 25.

Another track from ‘evermore’ entitled ‘closure’ shares the same meter as ‘tolerate it’. This industrial folk song is one of Swift’s successful attempts to temporarily shed her pop skin to go back to her roots.

In the song, Taylor Swift addresses her past relationships where her lovers are seeking closure. In turn, Swift expresses that she doesn’t need it and doubts their sincerity.

From the ‘Take Me To Church’ hitmaker Hozier comes the song ‘From Eden’. This 5/4 gem tells Hozier’s story of admiring someone from a distance. In an interview, he mentioned that he wrote the song from the point of view of the devil.

Also, Hozier added the metaphor of snake being a particular theme of the song. He said that it’s an imagery of wanting something else over everything else that the person already has.

The 5/4 time signature of Animals by Muse is easily apparent on its tricky drum line. It’s paired with an eerie music video animation that depicts greed and rage.

During a Q magazine interview, lead singer Matt Bellamy said that the song is written to diss Fred Godwin, the CEO of Bank of Scotland at the time. It’s in relation to the near-fallout of the bank, wherein Godwin took aggressive risks during his time.

Morning Bell was released in 2000 as part of Radiohead’s Kid A album. And in a live show in Israel in the same year, Radiohead lead Thom Yorke said that the song is about forgetting oneself and then remembering in a state of confusion.

Interestingly, Yorke lost the original recording of the song after his mini-disc got damaged during a storm. But months later, Yorke woke up and remember the entirety of the song, which is pretty much what the track is about.

One of the songs in 5/4 time signature is 15 Step by Radiohead. The song is beat-heavy, which is one of the trademarks of the band. This track is released in 2007 and is the opener of the album ‘In Rainbows’.

Also, 15 Step is one of the crowd favorites whenever Radiohead is having a show in Spain. It’s because when the beat is accompanied by claps, it resembles the rhythm of flamenco music.

9. Guilty Party by The National.

Guilty Party is a song about long relationships falling apart. Lead singer Matt Berninger describes the song as “emotionally confessional”. It explores the fictional end of his marriage with his wife Carin Besser.

While it’s based on a make-believe idea, the song remains emotionally charged. And to sew the melody together, the band used a 5/4 drum line that matches the peculiar backstory of the track.

While it’s not entirely a lyrical song, the theme of the movie Mission: Impossible is probably one of the most famous musical pieces with a 5/4 time signature. It’s composed by Argentinian Lalo Schifrin and was first used in the 1996 installment of the series.

11. Hanging Tree by Queens of the Stone Age.

Hanging Tree is the seventh track of Queens of the Stone Age album entitled ‘Songs For The Deaf’. It explores dark and mysterious imagery in a 5/4 fashion. Its drum line will surely catch your attention.

This song was originally written by Mark Lanegan and Alain Johannes for a musical collective called Desert Sessions. Eventually, Lanegan’s voice matched the song well that it went on to be part of the aforementioned album.

This song is included in the album ‘Five Leaves Left’, which refers to the warning included in Rizla cigarette packets.

Sadly, Nick Drake died at the age of 26 in November 1974. He passed away due to an antidepressant overdose. As the last line of this song goes, “Oh, how they come and go”.

White Room is a song that talks about hopelessness and depression. Oddly enough, the equally unusual 5/4 signature is used in such a fitting way.

For this song, the music came first. But band member Jack Bruce isn’t happy about it so he added his friend Pete Brown’s poems as lyrics.

This song was released in 1968 as the first track of the album ‘Wheels of Fire’.

Recommended: Top 15 Funny Mexican Songs that Will Cheer You Up.

Seven Days was released in April 1993 as the sixth track of Sting’s ‘Ten Summoner’s Tale’ album. It’s widely known to have the odd 5/4 time signature.

The song opens with a 5/4 drum beat and a syncopated string plucking. In an interview, Sting said that they wanted to have a reggae vibe similar to that of some Broadway shows.

And speaking of Broadway, the entry to complete our list is Everything’s Alright from the musical ‘Jesus Christ Superstar’. It’s written by Tim Rice and veteran English composer Andrew Lloyd Webber. Webber is also behind the timeless classic ‘Phantom of the Opera’.

Jesus Christ Superstar is unique by all means. It tells the story of Jesus Christ in a rock opera concept.

In this song, Mary Magdalene is using an ointment to help calm Jesus as Judas chimes in angrily. Being written in a 5/4 meter isn’t surprising for this song since it’s the brainchild of one of the highly acclaimed theater composers and impresarios in the world.

Time signatures may not be something you’d think about while listening to Taylor Swift, Ariana Grande, or Cardi B, but it’s an interesting topic to explore. Getting acquainted with this technical aspect can actually deepen your appreciation of the songs you like and music in general.

If you have other songs in 5/4 time signature you want to add to this list, feel free to let us know. And if there are other time signatures you want us to explore, don’t hesitate to comment below and we will create a playlist, too! 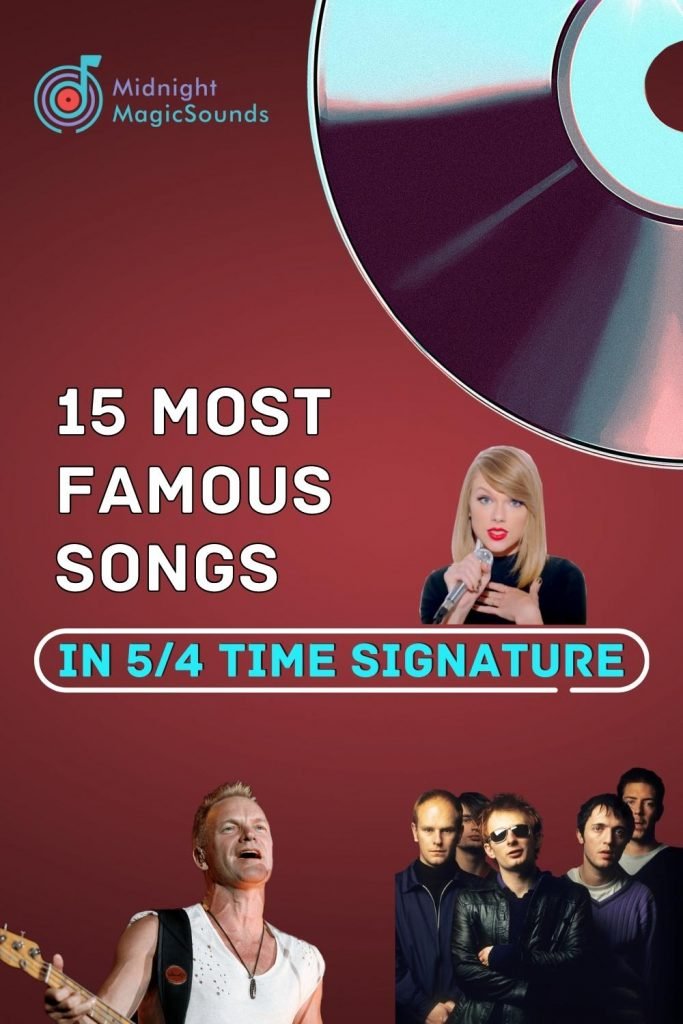