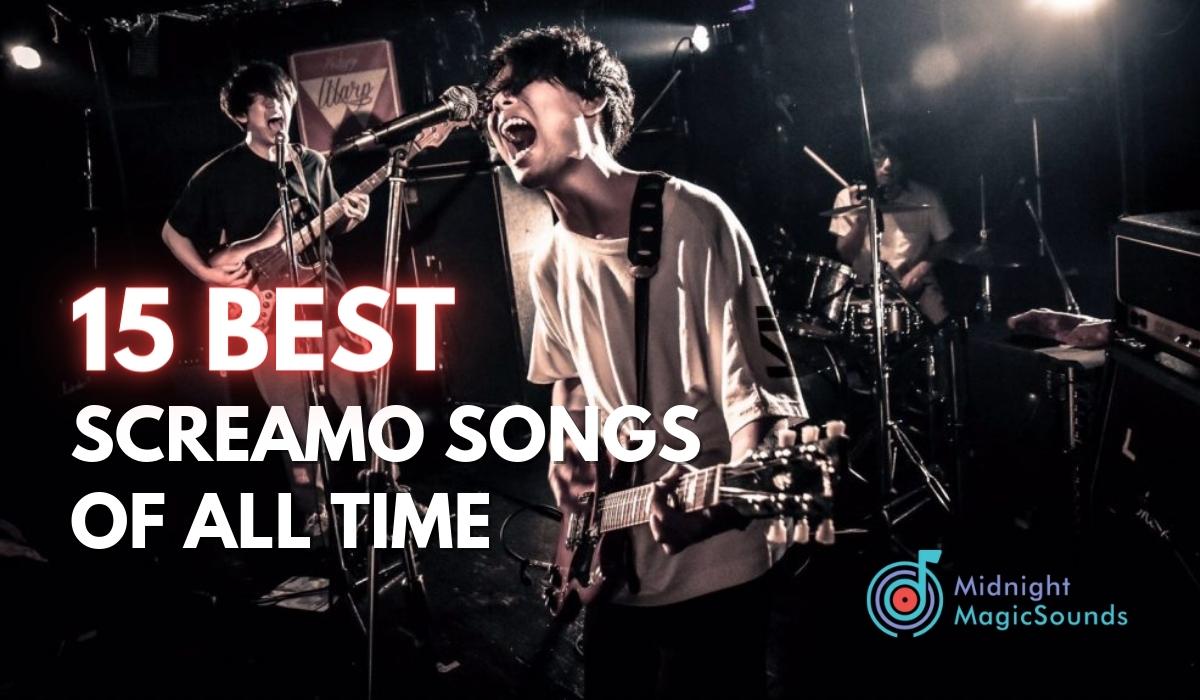 I say this with all the love in the world, but if pimply edgelord teen angst was a music genre, it would be Screamo.

I honestly don’t know where the entire scene came from, even though I was there when it was happening. One day, everyone was casual and just chilling, the next, they had anime haircuts and sounded like they needed a hug.

Don’t I just sound like a fan? You wouldn’t be very wrong if you imagined me speaking the previous paragraph in the snootiest voice possible. The very front lines of some of these genres that happened in this century just look and sound weird to me.

However, luckily for them (or for me), they usually come with some of the most amazing talent on guitars and in the rhythm section. I don’t think I ever heard a NU metal, Emo, or a Screamo band with a bad drummer.

So how do I get to determine what are the best Screamo songs of all time? Well, I don’t. The fans do.

I went through some sales charts and a lot of fan forums. I’ve eliminated things that are just a bit cringe, and concentrated on songs that were not only popular but also brilliantly executed. And if you don’t get an itching to put on some eyeliner, I didn’t do a good job.

I’m going to start with a song that accidentally exposed me to Screamo. I remember the moments, since my friend was laughing like crazy at me for making a face that said, “Who allowed this stuff to be so good?”

To be honest, the first few seconds lied to me and make me believe it Amon Amarth’s Death in Fire. However, this was not a tune about Vikings or toasters or whatever, but a pretty powerful statement of regret after making mistakes in a relationship.

Gotta give it to the genre. Sometimes it’s easy to make fun of the packaging, but what’s on the inside is a rare find.

There are two reasons I’m putting this song on this list.

One, the lyrics are not the “world sucks and I’m sad” kind of stuff, but the reminder to the young listeners they have the power to change things. And two, you can really hear Pantera’s influence on the band.

The song predates David Hoggs and Greta Thunberds of today, but it shares that energy. Maybe if you feel like the world is weighing you down, it could inspire you to fight back.

3. We Came As Romans – Broken Statues

At first, I wanted to add To Plant the Seed to this list instead, but changed my mind and gave this song a chance at the last minute. That’s an awesome development because this song is about second chances an opportunities as well.

This song is probably the best example of how scream and clean vocals can work together. Sometimes, they sound forced and plastic, while here they create a complex narrative through contrasting elements and decorations.

4. Dance Gavin Dance – Me and Zoloft Get Along Just Fine

Warning, make sure your headphones or speakers are not on max volume when you play this song.

If you were looking for yet another way to condemn the US pharmaceutical industry, do it with the song. It points out how everyone was quick to medicate everything.

I love how it’s paired with a bright and sunny video, very similar to the style of pharmaceutical ads. If you didn’t get the message, that ought to get it across.

Can a best Screamo songs list happen without Atreyu? Honestly, I could have put any of the songs or make this a one-band list alone.

Atreyu took something that was happening in Sweden, Finland, and Germany around the same time, then combined it with the already rising Screamo trends.

They may not have invented the genre, but they perfected it. And they were one reason why many listeners from Europe got hooked as well.

6. Norma Jean – Memphis Will Be Laid To Waste

Another song where you have to check the volume before you press play.

This was one of the most overanalyzed songs I’ve encountered. I’ve seen every interpretation of the lyrics: from teenage rebellion to the ultimate rebellion against God and the church.

Honestly, it’s yet another song about failing relationships. Something you’ll see more than once on this list, but masterfully employing all classic Americana symbolism, they can cram into one song and video.

Do you have a friend who wasn’t very true? Maybe you can use this track to tell them you saw through them finally.

We’ve heard many songs about bad friends, but we rarely get to hear their betrayal be compared to hearts beating strong under fictitious skies. You can say whatever you want about these emo kids, but they really have a way with words sometimes.

As Screamo love and breakup songs go, this is one of the better ones. It doesn’t appear manicured or over produced. The lack of the traditional clean vocal makes it sound more genuine and the feelings appear authentic.

There’s also a string Tool influence you can hear, but I must appreciate that it stops there and the band doesn’t take it further than that.

A Screamo song beginning with a “can I scream” line? Yes, please.

Refused’s music is downright minimalistic for the genre, but this song proves why Scandi minimalism will always be the bomb.

This Swedish band has been around for 30 years now and is still going strong. I could have picked any of their songs at random and still ended up with a winner. I went with this one in the end after seeing what US fans gravitate to the most.

Now we come to the obvious moment that explains the anime hair. If you’re into all those high octane intros, you will also be into Red Jumsuit Apparatus.

This is an anti-Church song. Doesn’t seem to be anti-religion, but definitely like to call out certain elements of religious worship. Both through the title and lyrics, they call out the hypocrisy in it.

If you wanted to call someone out for citing love while spewing hate, maybe you should make them listen to this track.

11. Kids in the Way – Safety in the Darkness

I propose this track for the anthem of teenage angst and depression. Talking about emotions is hard, but doing it to an almost peppy tune? Surprisingly comforting.

This song has one of the best uses of scream and clean vocals. It’s easy to overdo it on the scream, while here it’s sparsely employed only to emphasize the emotion.

Some will disagree with me putting it on the list, but guys, sometimes less is more. And there will be some more screaming ahead if you really can’t do without it.

12. Escape the Fate – The Guillotine

While doing my research, I found this song being recommended as the best wake-up alarm, as a must-have on the gym playlist, must-learn guitar solo, etc. On top of that, I’ve noticed it’s one of the rare times you will hear a growl vocal as well.

Screamo songs can be very sad, but this one is all about taking charge and pushing through. If you needed something to give you a kick up the derriere, this is it.

I almost made this list without Mastodon. Presented it to a Mastodon fan for a quick check and almost had my head shaved as punishment.

But it wasn’t my fault. I thought Mastodon was a Progressive Metal band that has scream vocals. As it happens, Screamo fans are also fans of this elephant’s extinct cousin. The bands also list them as dominant influence, so there you have it.

Antioch Arrow is one of the bands credited as founders of the genre, so could there be a best Screamo song list without them?

Davide came out way back in 1995, and it may sound somewhat unfamiliar to those who have grown up listening to almost every other band from this list. Still, you can hear all the elements that will become the staple of the genre only a handful of years later.

15. Bullet For My Valentine – Hand Of Blood

Of course. To some, this was the first metal band they’ve heard. To some girls, this was their boy band. If you saw someone with shaggy asymmetric bangs and a lip ring, you knew they loved Bullet for my Valentine.

Emo or Screamo, now that’s the question. I say Screamo, and I say a must-have on your playlist if you are into this genre.

“You are totally wrong! The song X is not Screamo but 100% Emo-Core, and the band Y hates being associated with the genre!”

No, I’m not psychic, but I’m still certain someone will have a few comments that run along those lines. Maybe with more profanities.

If you disagree with my list of the best Screamo songs, you might sing about it? I don’t mind writing a list called “Top 10 Songs Written After I Hurt the Fefes of a Few Emo Kids”.

After you don’t make that list, write some more music. Who knows, maybe that leads to a little renaissance within the genre soon. 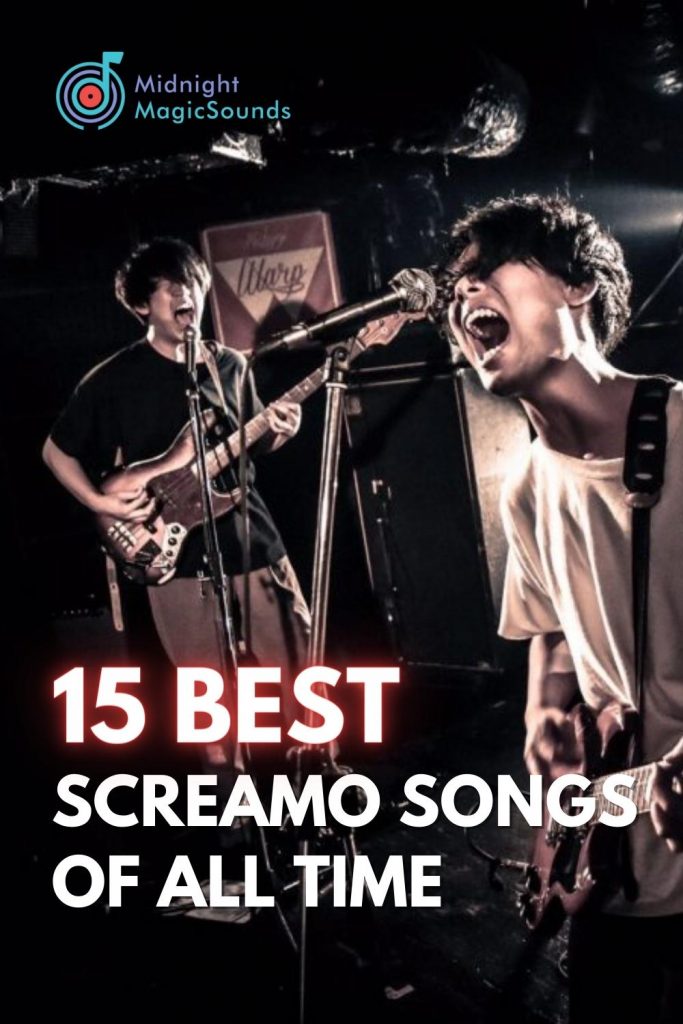